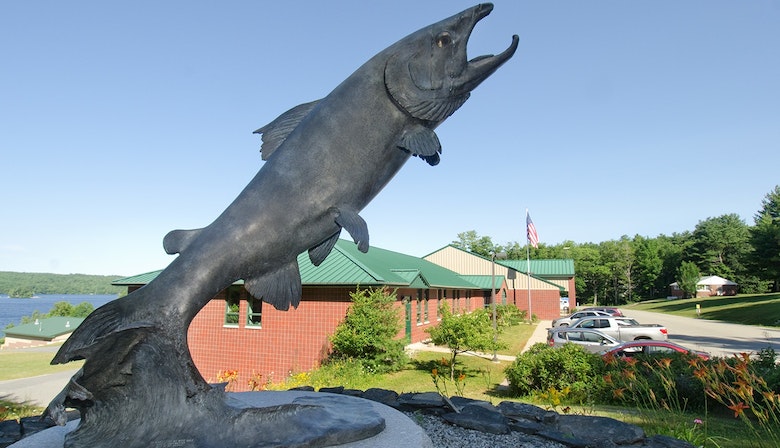 Craig Brook National Fish Hatchery in East Orland holds the genetic future of wild Atlantic salmon for the Penobscot and Downeast Rivers. Photo Tom Moffatt/ASF
A decade after the Penobscot River was included in the expansion of Endangered Species Act protection for Atlantic salmon originating in Maine, federal officials have released the final recovery plan for those fish. The news isn’t good. Federal officials estimate that it will take 75 years — about 15 generations of fish — for Gulf of Maine Atlantic salmon to be delisted entirely.

That news dims hopes that any angler who enjoyed fishing for salmon in Maine rivers in the past will live long enough to do so again.

Additionally, the plan estimates that the annual cost of implementing recovery actions will be $24 million per year on top of recovery-based efforts covered by regular federal budgets.

The National Oceanic and Atmospheric Administration and the U.S. Fish & Wildlife Service on Tuesday released their plan for the recovery of Atlantic salmon within the Gulf of Maine distinct population segment. The document will serve as the foundation for conservation and recovery efforts moving forward.

According to the plan, recovery efforts must focus on rivers and estuaries until threats salmon face at sea are better understood. In addition, the continued effort of fish hatcheries in the conservation is an essential piece of the recovery puzzle. Eastern Maine has two such hatcheries — Craig Brook National Fish Hatchery in Orland and Green Lake National Fish Hatchery in Ellsworth.

The Gulf of Maine distinct population segment of Atlantic salmon was originally listed as endangered in 2000. That listing covered fish returning to smaller rivers in the state. Subsequently, the USFWS and NOAA published a recovery plan for those populations in 2005. In 2009, however, the agencies expanded that listing to include all watersheds from the Androscoggin north to the Dennys rivers. That listing included the state’s most productive salmon river, the Penobscot.

Sean Ledwin, the director of the Maine Department of Marine Resources’ Sea-Run Fisheries and Habitat division, said that despite the dire prediction, his isn’t working on a 75-year timeline.

“We’re hoping to get results a lot quicker than that. I think, unfortunately, that reflects on the status of the species now,” Ledwin said. “Certainly populations south of us are essentially extinct, and we’re heavily reliant upon hatcheries to have any salmon come back to the state currently. So that’s starting at a pretty poor point. “

The plan includes recovery strategies and recovery goals. The overall goal of the plan: Return salmon stocks to the point where the Gulf of Maine fish will no longer have to be listed under the federal Endangered Species Act. Before that happens, the plan lists an “interim goal” of advancing the population far enough that an “endangered” listing can be upgraded to a “threatened” status.

The plan defines three distinct salmon habitat recovery units — one in Merrymeeting Bay that includes the Androscoggin and Kennebec rivers, as well as the Sheepscot, Pemaquid, Medomak and St. George river watersheds; one in Penobscot Bay, which also includes the Ducktrap watershed; and one stretching Down East, including all coastal watersheds from the Union to the Dennys.

Among the criteria required for a jump from endangered to threatened status: “The distinct population segment has annual returns of at least 1,500 adult salmon originating from wild origin, or hatchery stocked eggs, fry, or parr spawning in the wild, with at least two of the three salmon habitat recovery units having a minimum annual escapement of 500 naturally reared adults.”

For salmon to become delisted entirely, the plan calls for the distinct population segment to have a self-sustaining annual escapement of at least 2,000 wild origin adults in each habitat unit and a statewide total of 6,000 wild adults.

To put those numbers in context, in 2018 a total of 12 adult Atlantic salmon returned to the Kennebec and Androscoggin rivers combined, and fewer than 1,000 returned to the Penobscot, according to the Maine Department of Marine Resources website.

John Burrows, the director of New England programs for the Atlantic Salmon Federation, said focusing on improving salmon’s fortunes enough so that they’re listed as “threatened” rather than “endangered” would be a big victory that could happen more rapidly than total delisting.