May 4, 2021
Province eyeing large tract of water on Newfoundland's south coast as next site for farms 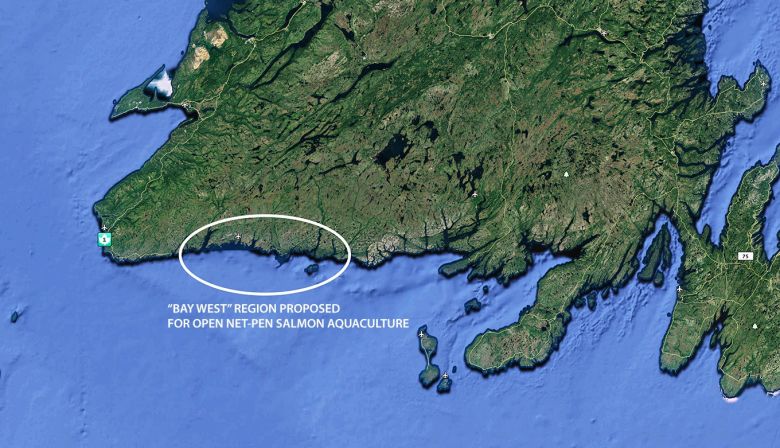 "Bay West" area that NL government wishes to see developed for open net-pen salmon aquaculture.
Salmon aquaculture farming is set to expand in Newfoundland and Labrador, despite alarming research into how the business might affect wild salmon populations.

The Department of Fisheries, Forestry and Agriculture is eyeing a particular tract of water on Newfoundland's south coast for future farms, which it says could contribute to economic growth in the province.

The department issued an expression of interest last October for the Bays West area, which it describes as a remote greenfield area "lacking infrastructure such as wharves, storage facilities, and roads."

Bays West starts west of Bay de Vieux, near Grey River, and runs along the south coast to the La Poile Bay area. It consists of approximately 160 kilometres of coastline.

"I'm going to visit some aquaculture companies and see what's going on. The Bays West is an opportunity for potential for growth for the province," Bragg told CBC Radio's The Broadcast.

Currently, salmon farming is concentrated in the Bay d'Espoir and Fortune Bay areas. Production in 2019 was 14,167 tonnes, down six percent.

The industry here has encountered hurdles and setbacks in recent years, including the salmonid anemia virus, which "when combined with unexpected mortality from high sea temperatures, contributed to the decline in overall production," according to a 2019 department report.

But those challenges haven't deterred the provincial government from setting its sights on expansion.

In another 2019 report, the department said it expects salmon production to exceed 50,000 tonnes by 2024, "as industry further develops."

Norweigan aquaculture company Grieg NL is also planning on harvesting 15,000 tonnes by 2025 in Placentia Bay, with a long-term goal of up to 45,000 tonnes.

Critics of the Bays West proposal, and net-pen aquaculture in general, point to the negatives associated with the industry. Sea lice, for instance, are endemic and a major problem for producers around the world.

Infectious salmon anaemia, a naturally occurring disease Health Canada says is harmless to humans, is a persistent issue within farmed salmon operations. This can lead to the death of salmon and early harvesting, and prompt concerns about spread to wild populations.

Salmon mortalities are high in the province, estimated at around 20 per cent of production in 2020, according to the Fisheries Department.

Salmon farming is a major employer on Newfoundland's south coast, but the industry suffered a serious setback in 2019 with the die-off of 2.6 million fish at sites owned by Northern Harvest Sea Farms. (Submitted by MAMKA)

Mark Lane, executive director of the Newfoundland Aquaculture Industry Association points to the Department of Fisheries and Oceans' own stock assessment of Atlantic salmon.

"There is no data or research to conclude that aquaculture is a definitive, contributing factor for salmon decline. What we do know is that industrialization, habitat loss, overfishing, interceptory fisheries from Greenland, St-Pierre-Miquelon ... and catch and release kills wild Atlantic salmon," Lane said.

Lane says he doesn't understand why people who kill wild salmon for sport point the finger at aquaculture, "where there is no correlation in salmon decline."

The Atlantic Salmon Federation is against the latest proposed expansion of salmon aquaculture in the province, however.

Neville Crabbe is the executive director of communications with the conservation group that speaks for some salmon anglers.

"Any effort to expand the industry right now is irresponsible at best, unconscionable at worst," Crabbe said.

Crabbe points to the high mortality rates associated with salmon farming in the province and says there are plenty of studies showing that aquaculture hurts wild stocks.

"The negative impacts of this industry are well known, and to say at this point to say it's not having any negative effects is similar to denying that climate change is a problem," he said.

Prior to the expansion of aquaculture in 2019 in the Bay d'Espoir area, Bradbury's study looked at what might happen to wild salmon.

With the aquaculture expansion, the study predicted that 1,915 escapees would reach rivers annually.

In an interview with The Broadcast, Bradbury warned of profound consequences from intermingling populations.

"Across the North Atlantic, work has continued to show that escaped farmed salmon interbreed with wild salmon and can cause either genetic changes or declines in wild populations," Bradbury said.

If more than one out of 10 salmon in a river is an escapee versus a wild salmon, Bradbury's study predicts the decline of the wild population. Parts of Newfoundland, according to his work, have already reached that ratio.

"Following the most recent expansion, we're seeing 20 rivers in the Fortune Bay and Bay d'Espoir area where we're exceeding that 10 per cent threshold," he said.

Prior to 2018, the threshold for reporting escapes was changed from more than 100 fish escaped, to any loss of fish.

"On the south coast of Newfoundland you've got about 500 kilometres, 76 known salmon rivers and sort of a best estimate of 22,000 wild adults returning to all those rivers," Crabbe said.

While no one factor can be singled out as causing a drop in wild salmon numbers, that decline on the south coast is precipitous. In DFO's latest stock assessment, both Conne River and Little River are listed at near local extinction.

The salmon population in Conne River has dropped dramatically since monitoring began in the late 1980s, from about 10,000 salmon then to fewer than 200 last year.

Asked why government is considering an expansion of aquaculture on the south coast when salmon continue to escape from farms, Minister Bragg said there's only been one escape reported in the last couple of years.

Bragg also points to the type of salmon that'll be raised by Greig Seafood in Placentia Bay. "They're getting into the triploid fish. Triploid fish will not mate, will not spawn with any natural fish. They're non-gender and they don't reproduce," he said.

A decision on which company will move into the Bays West area is expected in the fall of 2021.