Jun 3, 2020
An Atlantic salmon returned to the Penobscot in May. Here’s what this rare occurrence means 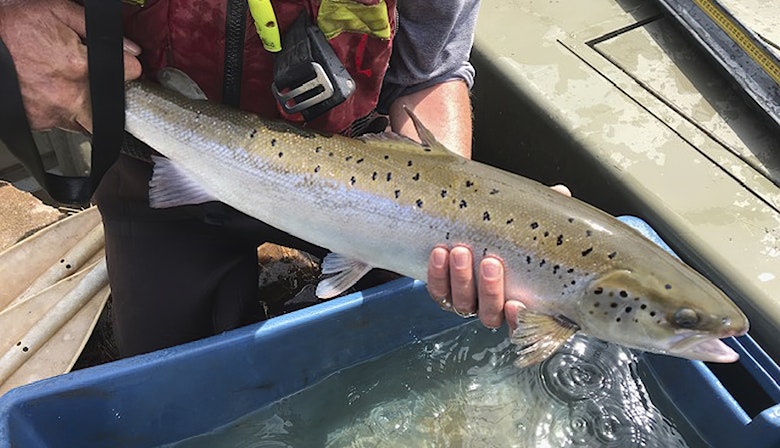 Atlantic salmon being measured at the Milford Fish Lift on the Penobscot. Photo Maine DMR
Atlantic salmon are returning to the Penobscot River at a steady pace thus far. Fisheries staffers from the Maine Department of Marine Resources said the 176 salmon that have been counted thus far are the fifth most to have reached the counting facility by May 29 in the 42 years that salmon have been counted on the river.

Among those fish was a rarity: A male that was making a return trip to the river to spawn.

Jason Valliere, a fisheries resource scientist for the DMR’s Division of Sea Run Fisheries and Habitat, said not many salmon are able to head to the open ocean twice and return to the Penobscot successfully, and called the fish “extra special.”

“We previously captured this fish on June 10, 2018, when we tagged him and sent him to Craig Brook National Fish Hatchery [in Orland] as a brood fish to support the smolt stocking program, a program that he is a member of. He was stocked out as a smolt in 2016,” Valliere said.

Smolts are young Atlantic salmon that are ready to go to sea after having spent two to three years in their native river.

“Back in 2018 he was transported from the fishway to the hatchery where he was held for the summer, spawned in the fall, and released back into the river,” Valliere said. “He then returned to the ocean, spent 18 months, grew another 7 inches, and now has returned to the Penobscot River again. He’s definitely a survivor.”

The salmon is now 40 inches long, or 37 inches from the tip of his nose to the fork of his tail. As a reward for his tenacity, the fish earned some special treatment.

“This time he was released directly back to the river to find a mate and complete this trip the way nature intended.” Valliere said.

A year ago, just 31 salmon had been counted at the Milford Dam by May 29.

Fish were counted at the Veazie Dam until it was removed in 2013. Now the counting facility is located farther upstream, at the Milford Dam.

The early results don’t mean that the overall season return will continue at this pace, however. Salmon are reluctant to enter the river after the water warms, and while this year’s warm weather has given the salmon run a kickstart, prolonged warm temperatures will stunt that run over time.

“This spring started off slow and cool but has quickly turned dry and hot. We could use some rain and cool nights,” Valliere said on May 29. “Next week’s forecast is predicting a little bit of a cool down which is good for our fish. Last year on May 29 the Penobscot River, here at Milford, was 55 degrees. As I type this email and stare at the thermometer, it reads 74.”