Meeting does not quell concerns about salmon farm near Acadia NP 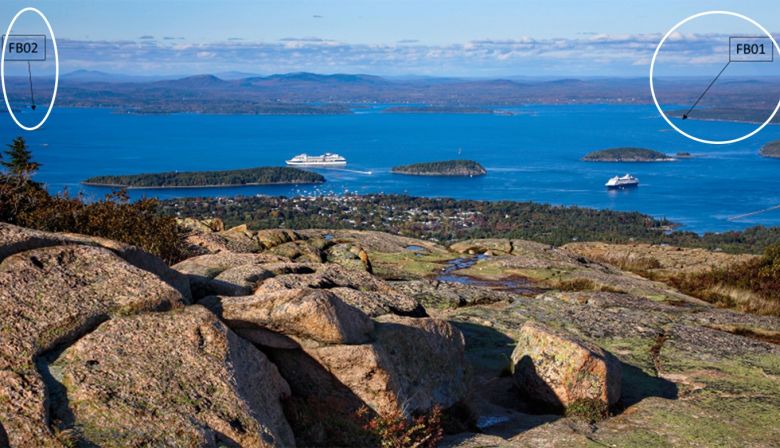 Locations of the two farm sites, each with several cages.
GOULDSBORO — American Aquafarms last week once again made a case for its $330 million project to raise Atlantic salmon off Bald Rock and Long Porcupine Island and process the fish at the now dormant Maine Fair Trade Lobster Co. facility in Prospect Harbor. But the Norwegian-backed company’s June 23 presentation did little to quell citizens’ fears that the proposed operation will harm the area’s robust lobster fishery and scenic values that draw millions of visitors to the region annually.

At the Maine Department of Marine Resources’ 3.5-hour scoping session, held via Zoom, American Aquafarms heard comments and answered questions about its proposal and draft applications to lease the two Frenchman Bay sites for up to 20 years. The intent, too, was for the company to inform the public about its proposed plan to harvest as much as 66 million pounds of salmon annually from the two 15-pen sites and process the fish at the Prospect Harbor facility. Sardines, lobster and other seafood have been processed almost continuously at that facility and transported to market from there for at least 115 years.

Attending the Zoom session, Acadia National Park Superintendent Kevin Schneider had a prepared statement to read aloud, but he was not among the 13 people who got to speak during the allotted time. In his statement, made public June 24, Schneider called for the DMR’s July deadline for submitting written comments on the long-term leases to be extended to Aug. 6. In his remarks, he noted that Acadia National Park is just 2,000 feet at the closest point from the two lease sites each comprising 60.32 acres. At both sites, two rows of eight and seven closed pens would be arranged in grids and anchored to the ocean floor in mooring systems encompassing 10 acres each.

Since 1916, Schneider said Acadia has strived to protect the region’s scenic qualities and natural and cultural resources from Schoodic Point to the East Penobscot Bay shipping channel near Isle au Haut. ANP owns 2,700 acres or half of that offshore island. He said the park “encourages compatible adjacent land uses” and actively engages in local, state, tribal and federal regulatory processes to lessen potential adverse impacts on the park. In the Frenchman Bay area, he said commercial fisheries and existing aquaculture have not posed a threat until now.

In 2019, Acadia’s visitors contributed $511 million to the regional economy and provided 5,500 jobs to people living within 60 miles of the park.

“The scale of this development — the equivalent of 16 football fields — is unprecedented in Maine and incongruous with the existing nature and setting of Frenchman Bay and its surrounding lands,” the park superintendent commented, saying American Aquafarms’ proposed operation poses potentially significant impacts to Acadia and its visitors’ experience.

Frenchman Bay fishermen Shane Carter, Josh Duym and James Hanscom also took issue with the project’s scale as well as potential fishing gear conflicts in Frenchman Bay, which is 7 miles across at its widest point, stretching from eastern Mount Desert Island to the western Schoodic Peninsula shore. In the inlet, the high-speed CAT (when it resumes service), another seasonal ferry, numerous fishing vessels, tour boats and pleasure craft already coexist and lobster gear conflicts already occur from time to time. At present, lobster, mussels, scallops and sea urchins are harvested in the bay. Oysters and various species of seaweed are farmed there, too, on a small scale.

“Our bay was never meant to be industrialized,” said Hanscom, a lobster fisherman from Bar Harbor.

Elizabeth Ransom, senior project manager at Ransom Consulting Engineers and Scientists in Portland, responded to the lobstermen’s concerns about both the Bald Rock and Long Porcupine sites’ locations in prime fishing grounds. Her firm conducted much of the field work and computer modeling and statistical analysis behind the sites’ selection and in drawing up the draft DMR and Maine Department of Environmental Protection applications.

Since a few meetings with fishermen last fall, Ransom told the lobstermen that the Long Porcupine site’s layout has been changed from a rectangular grid, consisting of two rows of eight and seven pens aligned side-by-side, to an L-shaped configuration to better accommodate boat traffic nearby. More importantly, she said the Long Porcupine site’s original location has been moved much farther north and away from the “The Hop,” a deep basin favored by lobster and spawning shrimp, where Hancock, Lamoine, Sorrento and South Gouldsboro lobstermen set a lot of traps.

“We encouraged American Aquafarms to move farther and farther away from The Hop,” Ransom said during the scoping session. When asked the next day, she said the Long Porcupine site is now 300 feet farther to the northeast.

In addition, Ransom said the Bald Rock site location has been adjusted, too, in response to fishermen’s concerns. She said that lease area has been moved about 750 feet north and 300 feet west away from active fishing grounds.

Critics also have questioned American Aquafarms’ plan for its vessels to travel at least an hour from Prospect Harbor — rounding Schoodic Point — to reach its Frenchman Bay operation. They pointed out the travel time would take too long to respond to an urgent situation at either site. In season, they also noted the Schoodic Peninsula shoreline is dotted with lobster buoys and damage to fishing gear would be unavoidable.

During the session, American Aquafarms Vice President Eirik Jors said the company “is open and willing to adjust routes based on requests and feedback from fishing and local communities.” Later on, company officials said they are looking, but haven’t secured yet a “secondary” mainland departure point to cut the travel time and reach the pens in less than 30 minutes, according to the draft DMR lease applications.

To tend the Bald Rock and Long Porcupine sites, American Aquafarms would use the 140-foot vessel Mar Fortune (499 tons) to transport juvenile fish, feed, diesel fuel and oxygen tanks there from the company’s planned processing/hatchery complex in Prospect Harbor. At each site, a feed/processing barge would be equipped with a generator and stainless-steel tanks to store waste, diesel and oxygen. The barges also would have a hazardous waste storage unit on board. Harvesting would take place there three to six days per week year-round. On alternating days, the sites’ salmon would be harvested within about a three-hour period. Two crews of 8 to 10 people would take turns tending the pens during daylight hours. An automated system would feed the fish throughout the day.

At each site, seawater would be pumped up into the pens from an ocean depth of 100 feet. Oxygen is constantly added to the inflowing water. Fish waste is continuously pumped up, filtered and compacted for transport to the mainland. Shipped from Searsport, low-sulfur marine oil would power the sites although solar energy options are being explored. Running 356 days a year, the sites would burn over 1 million gallons of diesel fuel annually.

The public can continue to register their comments either online or in writing about American Aquafarms’ draft DMR applications until 5 p.m. Wednesday, July 7. Comments may be sent electronically via

or by mail to the DMR in Augusta no later than 5 p.m. July 7. Comments also can be sent by mail to Maine Department of Marine Resources, Attn: Aquaculture Division, 21 State House Station, Augusta, ME 04333-0021. Submissions must be postmarked on or before July 7.