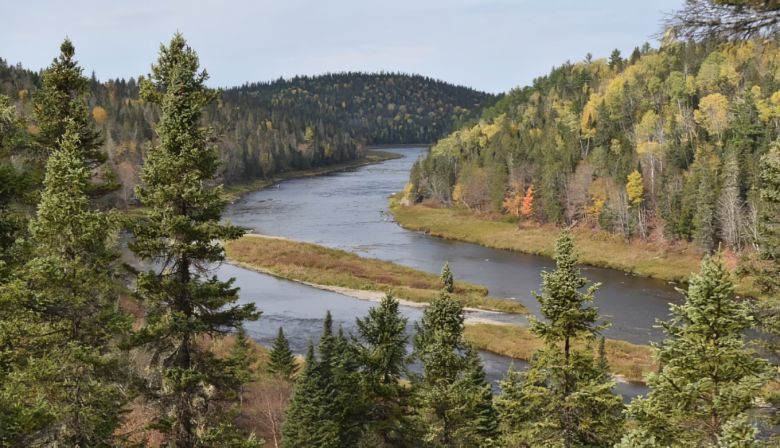 Hiking trail would be related to a very important Atlantic salmon river in northern New Brunswick. 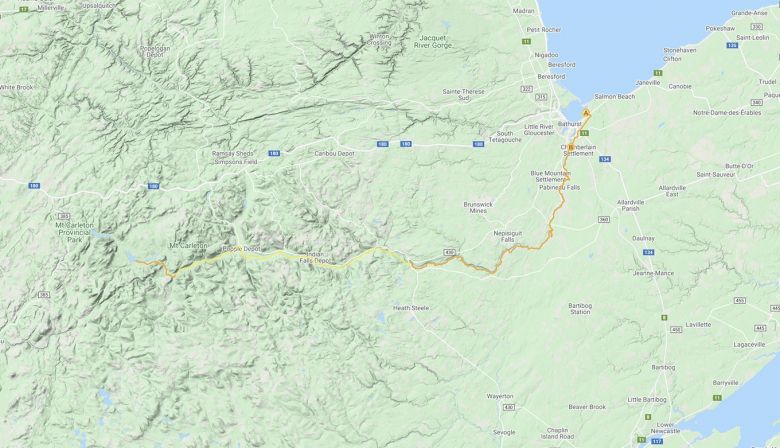 Orange indicates parts of the hiking trail already built. Yellow indicates future additions to the route.
A Mi'gmaw conservation group has spent four years building a hiking trail on historic land along the Nepisiguit River and is asking New Brunswick to protect it.

Efforts to build the Sentier Nepisiguit Mi'gmaq Hiking Trail, which extends 150 kilometres from the Bathurst to Mount Carleton Provincial Park, began in 2014.

About 50 to 100 volunteers took part in conserving the forested land and making it accessible to the general public for hiking and snowshoeing.

"It's probably, in New Brunswick and perhaps the eastern seaboard of North America, one of the wild sections of land that remain," said Blake Maher, a volunteer with the Mi'gmaq Trail Association.

"We feel it will be one of the best hiking trails."

For more information on the trail, go to:

Maher said the trail is now partially protected with restrictions on wood procurement close to the Nepisiguit River. If the trail wins further protection under the province's nature legacy program, it would be protected in its entirety.

"By getting this protection, it will protect the jewel of the environment, but also enhance everyone's experience who uses the trail," said Maher.

Maher said the trail, which features waterfalls and forest and brings hikers close to the river, would take at least seven days to walk. The trail has wooden bridges and warming stations, and there are camping sites throughout.

The provincial government established the nature legacy program to double the amount of protected land in New Brunswick, in collaboration with Indigenous partners, conservation groups, other stakeholders and the public.

The goal is to protect 10 per cent of wooded areas of New Brunswick deemed "special" by surrounding communities from clear-cutting and mining.

The program will protect nearly 400,000 hectares of land, bringing the total of protected land in New Brunswick to 10 per cent of the province.

The Mi'gmaq Trail Association submitted a proposal for the trail to be considered for the program, and an 8,400-hectare area has been selected as a candidate area.

The province has launched a survey for each candidate area to allow the public to have a say in which areas are selected for protection.

Maher said about 100 people using the Sentier Nepisiguit Mi'gmaq trail filled out the survey in just a few days, and he hopes many more will contribute their thoughts in a show of support.

"We have been pleasantly surprised already to see how many people have supported it and, not only filled out the survey, but passed it on to friends," he said.

Maher said the Nepisiguit River was used by Mi'gmaq for thousands of years.

They would travel by canoe to Chaleur Bay near present-day Bathurst in the summer and escape harsher conditions in the fall and winter months by moving farther into land.

The forests surrounding the river were used for hunting.

While many protected areas in the province are closed to fishing and hunting, Maher said, the Sentier Mi'gmaq trail would still allow licensed fishermen and hunters to access the area under the legacy program.

Maher said the conservation group expects to hear whether its proposal is successful by March 2023.