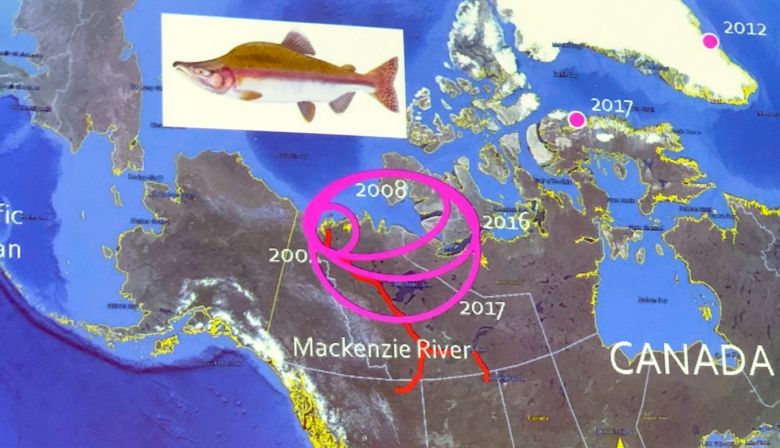 CAMBRIDGE BAY—A few Pacific salmon caught as far east as Cambridge Bay, in addition to the recent catch of a salmon shark near Kugluktuk, are some of the latest signs that the waters in the western Arctic have changed with the warming climate.

“The opportunity of access is greater than it was before,” said Karen Dunmall, an aquatic biologist with Fisheries and Oceans Canada, about the growing presence of Pacific salmon caught in western Nunavut waters.

With less sea ice and new leads in the sea ice, Pacific salmon are able to follow their favourite foods, which range from tiny plankton to jellyfish, shrimp and smaller fish, Dunmall said.

Dunmall and other marine biologists with the Arctic salmon program now estimate that so far in 2019 roughly 2,000 salmon samples have been provided to their research program.

This almost triples the number of salmon from any other year on record during the 19 years of monitoring salmon with harvesters, said a recent update on the program.

As well, the number of places where the fish are found seem to be increasing.

Salmon are arriving three weeks earlier and are being “harvested daily” across the Northwest Territories and into western Nunavut, as far east as Cambridge Bay, the update said.

Pacific salmon may possibly reach communities even further east into Nunavut, Dunmall said, as the fish continue to scout out freshwater places to spawn.

If they don’t find fresh water with the conditions they need for spawning, the salmon may lay eggs, but those eggs probably wouldn’t be at the proper temperature to survive.

To date, the only kind of salmon that spawns in the western Arctic is the chum salmon, although sockeye were caught around Cambridge Bay in 2017.

About 20 salmon have been sent in so far this year from around Kugluktuk.

And likely more samples will come in from the Cambridge Bay area, she said.

Dunmall said she’s hoping to receive more salmon samples this year through the hunters and trappers organizations before the ice closes in, although salmon have sometimes been caught through the ice in November in the Mackenzie Delta region, she added.

Dunmall has prepared a “guide to identifying salmon and char in the Arctic” in English and Inuktitut, with lots of coloured illustrations, so that hunters and fishers can recognize salmon if one comes up in a net.

The salmon research program also aims to learn more about how the presence of salmon may affect native fish species, such as Arctic char, Dunmall said.

The samples of salmon can help them see what the fish have been eating and whether it is a similar or different diet from that of Arctic char.

The growing presence of salmon in western Nunavut could help explain the recent catch of a salmon shark near Kugluktuk.

The Arctic salmon project is also interested in what is happening with Atlantic salmon, and Dunmall plans to visit communities to discuss that, starting with Resolute Bay in November.