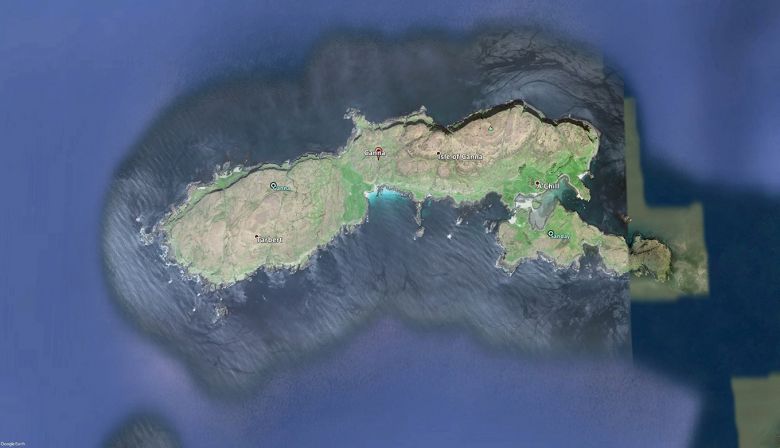 The Isle of Canna sits just south of Skye, and is of unique natural heritage. Google Earth.
Significant environmental concerns have been raised about plans to build a large salmon farm just off the coast of Canna, a tiny Hebridean island near Skye.

Mowi, the world’s largest salmon producer, has tabled outline plans to install eight fish farm cages to grow thousands of tonnes of organic salmon in one of the most environmentally protected areas of sea in the UK.

The cages would be 160 metres in circumference, the largest installed in the UK, after Scottish ministers relaxed rules in an effort to push salmon farms further offshore to reduce the pollution and welfare problems that dog the industry.

The eight pens would cover nearly 16,300 sq metres, more than twice the size of a football pitch, with moorings stretching over 222,000 sq metres of seabed.

Scottish Natural Heritage, the government’s conservation watchdog, has said Mowi’s proposals could lead to “significant environmental effects” on the area’s seabirds, porpoises and seals, and threaten other rare marine life on the seabed.

There are also fears about the impact on Canna’s small community of 18 people, which has recently had problems with incomers unable to integrate and settle there, in part because of its isolation and harsh winter weather.

Mowi has said it will employ 10 people at the site and has offered jobs to islanders, suggesting that outsiders will also need to be based on Canna year-round. That creates challenges for the National Trust for Scotland, which owns Canna and has struggled to repopulate the island. It says it is legally required to protect Canna from harmful developments, and bars private housebuilding there.

The site is also covered by a swathe of legally binding marine and environmental designations, including a marine protected area (MPA) that covers Canna and its sister islands Rum, Muck and Eigg, known collectively as the Small Isles.

SNH told Highland council, which is overseeing Mowi’s planning application, that it could harm black guillemots and have significant effects on other birds including puffins, red-throated divers and Manx shearwaters, which are also protected by two special protection area designations.

Mowi acknowledged such questions had to be addressed and admitted the site is also close to two seal “haul-outs”, spots where the animals pull themselves on to land, on Canna’s coast. Seals can cause immense problems for fish farms, damaging nets in an effort to get to the salmon, occasionally leading to mass escapes.

The company said it was unable to use acoustic deterrents or extra protective netting because those could harm harbour porpoises and other cetaceans that swim past Canna, and which are also legally protected. Instead, it could resort to licensed shooting if seals attack the site, a measure that has led to angry protests by animal rights groups elsewhere in Scotland.

Mowi said an organic farm would have much less environmental impact than a conventional one, and would replace two existing farms in sea lochs on the mainland, including a controversial site at Loch Ewe blamed for devastating local sea trout stocks.

If it goes ahead, the Canna farm will hold a maximum of 2,500 tonnes of fish at a time, a third less than a non-organic farm of the same size. Some critics, however, fear Mowi could convert it to a conventional fish farm in future, once it gets permission.

Under intense pressure from campaigners to address the pollution impacts of its farms, Mowi has promised that by 2020 all its sites in the UK will be accredited by the Aquaculture Stewardship Council, which requires stronger welfare, environmental and climate standards than other schemes.

Geraldine MacKinnon, chair of the Canna Development Trust, which oversees the island’s economic investment strategy, said the islanders were split over the proposal. They are holding further talks with Mowi on Tuesday and have been in close contact with neighbours on Rum and Muck, where Mowi already has two fish farms. “People haven’t made up their minds either way,” she said. “It’s a massive decision, so people just want to take their time.”

Mowi said it was working closely with the islanders. “We continue to explore sites that are fit for today’s salmon farming regulations and will work with communities that express interest in building a development that helps support local economies,” it said.