Jun 28, 2019
NB Power has announced its intention to decommission the Milltown Generating Station. The dam, located on the St. Croix River between St. Stephen, N.B. and Calais, Maine, is Canada's oldest hydroelectric station. 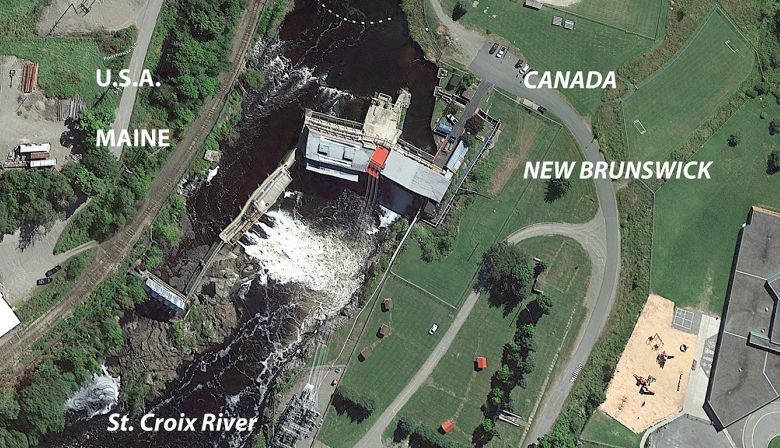 The Milltown Dam is the lowermost mainstem barrier to fish migration on the St. Croix River that is the international boundary between Maine and New Brunswick near the Bay of Fundy.
NB Power is seeking government approval to mothball the Milltown Generating Station.

In a press release, the utility reports that the Milltown station has "reached the end of its life" and NB Power will host a public meeting in July in St. Stephen outlining reasons for the company's decision.

"NB Power investigated the possibility of extending Milltown’s life as well as improving the fish passage. After a thorough engineering and cost evaluation process, it was determined that extending the life of the generating station was not financially feasible and the Milltown Generating Station should be decommissioned," the news release states.

"We understand that the generating station holds more than a century of history in southwestern New Brunswick and that it touched the lives of many people in the community over the years," said NB Power’s President and CEO, Gaëtan Thomas. "This is why we are committed to work with the community through every phase of this project."

The Milltown station is Canada's oldest hydroelectric power station, the press release states. The dam, located on the St. Croix River between St. Stephen, New Brunswick and Calais, Maine, was built in 1881. It is the first hydroelectric facility built by NB Power.

The generating station accounts for about 0.8 per cent of NB Power’s hydro generation, the company states in the press release, "so there will not be a major impact on the overall New Brunswick power grid resulting from the decommissioning."

Thomas said the decommission of the station and tear down of the dam will allow for the restoration of Salmon Falls and approximately 16 kilometers of the St. Croix River. "This will make about five million square metres of spawning habitat available to the various diadromous fish species."

The project must first undergo an environmental impact assessment with the provincial Department of Environment and Local Government, scheduled for this summer.

The press release reports that consultations with First Nations have already begun. Following the environmental impact assessment, NB Power states it expects decommissioning to begin in the fall of 2020 and continue throughout 2021.