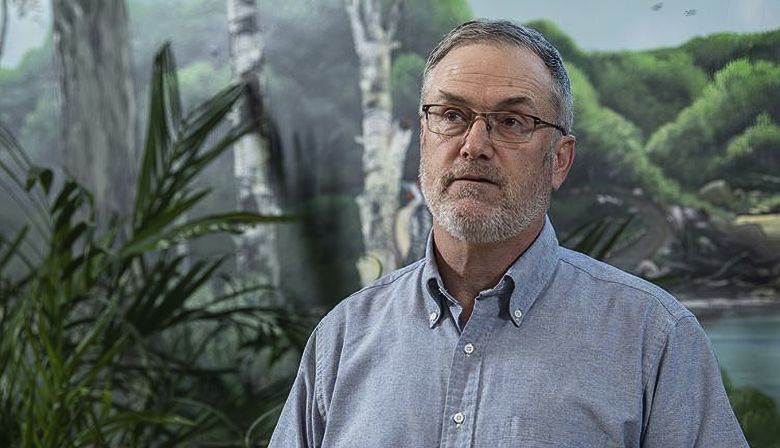 Tom Beckley. Photo UNB
Researchers at the University of New Brunswick (UNB) have been awarded funds over the next three years to investigate and implement an alternative paradigm of restorative forestry practices in the Maritimes. The work will include collaborating with landowners, conservation groups and groups undertaking forestry activities in the region.

Research by Tom Beckley, Solange Nadeau and colleagues suggest that higher rates of clearcutting across the Maritimes do not reflect the values of woodlot owners.

Beckley, the project’s lead investigator and a professor in the Faculty of Forestry and Environmental Management at UNB, hopes the project will sign up 9,000 landowners and affect an area of 500,000 hectares by the year 2025. Beckley hopes to have frequent interaction with 40-50 landowners during this time.

Approximately 80,000 private woodlot owners in the Maritime provinces own about 40 per cent of the land base. Their management decisions are influenced by many socioeconomic factors that ultimately impact the forest.

According to Beckley, “There exists an opportunity to create a forward-looking, ecologically beneficial, forest stewardship and land care paradigm in the Maritime Provinces on privately-owned land.”

The $169,000 Partnership Development Grant, awarded by the Social Sciences and Humanities Research Council of Canada (SSHRC), will build on previous research and will concentrate on stewardship goals and practices of landowners.

The approaches aim to address how landowners struggle to know each other’s plans, what groups to trust and how to best go about achieving their objectives. For these reasons, Beckley said that interviews with landowners “will be conducted to clarify the roles, relationships, mandates, and ideological orientations of these groups as they relate to Acadian Forest restoration.”

“From this base of groups and individuals, we will build an alternate paradigm of restorative, climate resilient forestry with the intent of creating a renewed and modified Acadian Forest that sequesters carbon, achieves old growth status, maintains continuous tree cover, and flourishes in its diversity while still providing financial returns and other benefits to its owners,” said Beckley.

“This paradigm contrasts with the dominant forest practices in the region (clearcutting, conifer plantations, and spraying to suppress hardwood species and conifer insect outbreaks) that have led to a forest that is commercially valuable, but one less resilient to a changing climate,” stated Beckley.

A new approach to forest practices poses the question of whether Indigenous peoples/knowledge holders will be included in management decisions.

“As mentioned in the proposal, we wish to create a ‘coalition of the willing’ that support a progressive silviculture regime for the region. In that respect, Indigenous groups are more than welcome to join and participate, and we feel they could be key allies,” said Beckley.

“This project relates solely to private land, which we acknowledge is traditional Wabanaki Territory. However, Indigenous groups in the region primarily put their focus on Crown land, which is not within the scope of our project,” Beckley said.

Community Forests International’s Anne Herteis supports the project. “Most landowners are not interested in high-intensity timber harvesting, but the conditions or the region’s forestry industry are such that they don’t see any other viable economic options. This project is intended to help landowners manage their forests in a way that reflects their values, while at the same time engaging everyday people in forest stewardship issues, especially those linked to climate change,” said Herteis.

“The Acadian Forest Region has been extensively degraded through centuries of intensive land-use and forestry practices favouring single-aged, softwood-dominated forests. The forest landscape is now relatively young and suffers from a lack of diversity and complex habitats,” argued Herteis.

“Through capacity-building, resources, and storytelling, Beckley’s project will enable landowners to make value-aligned decisions, that, when considered as a whole, will help restore the region’s unique Acadian forest,” said Herteis.

Cortney MacDonnell is an environmental action reporter with RAVEN (Rural Action and Voices for the Environment), a research project based at the University of New Brunswick.