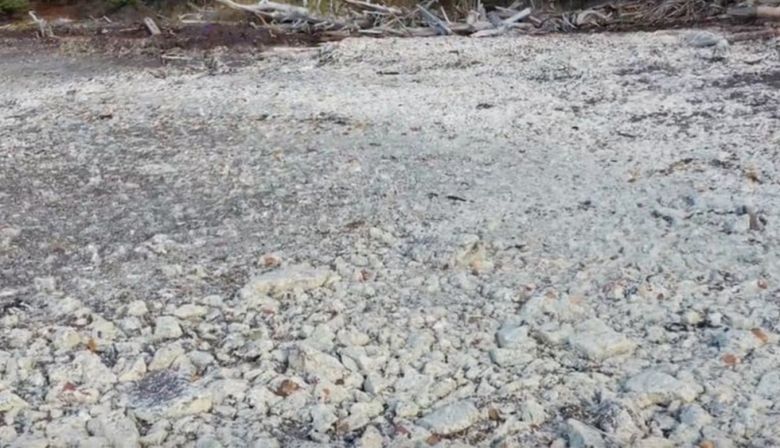 Beaches in Fortune Bay coated with a think layer of salmon fat and related debris.
Northern Harvest Sea Farms says all dead salmon have been cleaned up from Fortune Bay, nearly two months after the die-off was reported to government.

The aquaculture company posted on its Facebook page Monday that the cleanup was finished as of Friday.

However, photos and videos obtained by CBC News shows large swaths of yellow fat within some sea cages and white residue coating beaches and covers on the south coast.

"Northern Harvest is committed to being as thorough and comprehensive in its response effort as possible, and we continue to keep our staff focused on any remaining site clean up activity," the company wrote.

The company went on to thank staff, seiner and dive teams, as well as supply and service groups which helped in the effort.

However, Clancy Walker of the activist Sea Shepherd Conservation Society says that any cleanup done appears not to have involved the nearby beaches, which are covered in an inch of salmon fat.

"This sticky substance just gets onto everything and there's no way I can see it coming off any time soon," Walker told Here & Now.

Northern Harvest Sea Farms — a subsidiary of Norwegian aquaculture giant Mowi — said the die-off, which it reported to the provincial government Sept. 3, was caused by warmer than normal water temperatures, which lowered oxygen levels in the pens on Newfoundland's south coast.

But it would be another three weeks before the deaths were made public, announced by the Fish Food & Allied Workers union, which said the die-off raises questions about the viability of the aquaculture industry.

Walker had been working with Sea Shepherd off the coast of British Columbia before coming to this province to observe the aftereffects of the salmon die-off.

"When we heard about this mass die-off that was occurring here on the Atlantic Coast we thought we should come over, check it out because it sees like a pretty significant event," he said.

"But after seeing it first-hand, I could say that this is actually what I would call a catastrophe."
'We need to take this as a warning'

Newfoundland and Labrador's chief aquaculture veterinarian, Daryl Whelan, confirmed the massive die-off was the result of low oxygen, despite the FFAW suggesting sea lice may have been to blame.

The warm water was confined to the areas Northern Harvest is operating in, and no other aquaculture companies have reported any mortalities related to warmer-than-usual water.

"With the climate crisis that is emerging right now, we need to take this as a warning, and we can expect much more of this," Walker said.

One of the issues with open-net pen aquaculture is that wild environments like the ocean are difficult to control or predict, he said, and the result is that events like this die-off can be expected to become both worse and more common.

The result can be disease that incubates in dense farmed environments, then spreads to wild environments nearby, he said.

Last week, Premier Dwight Ball said the company won't get its licence back until the province is satisfied salmon farming can be done sustainably.

While speaking to media following an event Monday, Ball said the government will be monitoring the situation on the south coast to ensure all the cleanup work has been done.

Ball said there is no timeline for when Northern Sea Harvest will get its licence back.

"There's some discussions we need to have with the industry," Ball said.

"This is really the first time we've seen this environmental challenge impact the aquaculture industry. We need to look for new ideas to prevent it from happening again."

A company spokesperson did not immediately respond to questions from CBC News.