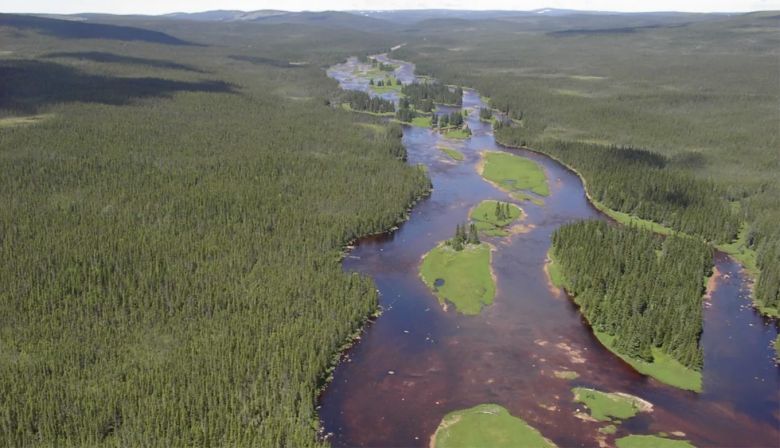 The Main River watershed was supposedly protected from developments such as an ATV trail - but the provincial government went against its own rules. Photo Lem Mayo
Gary Gale has known the Main River his whole life — and how special the Northern Peninsula waterway, and the land surrounding it, is.

"I've fished and hiked the Main, God — since I was knee-high to a grasshopper, I suppose," he told CBC from his home in Hampden.

The Main River is about as remote as it gets in Newfoundland. You can see the mouth of it, where it spills into White Bay between the two communities of Sop's Arm and Pollard's Point, but there was no road access into its watershed whatsoever until the mid-1980s, and even then, nothing beyond rough woods roads.

Its pristine waters and old-growth forest led to it being designated a Canadian Heritage River in 2001 — the first one in the province — for what that organization deemed "its outstanding natural and recreational values." In 2009, an extra layer of protection was added, when the province established the Main River Waterway Provincial Park.

With those titles came a management plan, and an agreement: the creation of a committee, involving locals, the government, and other stakeholders, to keep Main River's wilderness intact.

But those safeguards appear to have been bypassed. In August 2019, the province greenlighted an ATV trail for an outfitting company within the park boundaries, a move that came to public attention in late 2020 when an environmental assessment was filed, and later withdrawn.

The trail proposal caught Gale —a member of the river's stewardship committee — off guard, and left him and others angry.

"People in this area are shocked, and devastated, and very upset," he said.

The 2001 management plan for the Main River is clear: "No ATVs will be permitted in the waterway park," it states, a ban extended to ATV trails, and meant to protect its ecosystem. Canoes, kayaks, and even snowmobiles are allowed.

"Once you start putting ATVs in an area like that, it's going to become a free-for-all and they're going to tear the heck out of that area," said Gale.

But such damage is already happening anyway, according to the Department of Tourism, Culture, Arts and Recreation, particularly after a Nalcor transmission line and access road outside the park was built.

"Due to increasing illegal ATV use on bogs and wetlands in the park, approval was given to the outfitter in August 2019 and a permit was issued. Construction of the public trail is underway," a statement from the department said.

"I think it's a foolhardy argument," said Gale.

"And I believe that the real issue here is that our province is not living up to the obligation that it made, that it would manage the area."

As part of the waterway's stewardship agreement, the province agreed to consult stakeholders, like Gale's committee, on any amendments to the park's management plan. Meetings between all sides were slated to happen at least once a year.

Gale said the last one he attended was in 2011, and he's never been able to find out why they stopped.

"I've been reaching out for years to the department, for meetings. I get the royal runaround all the time," Gale said.

The stewardship agreement states it is not a legally binding document.

The trail was requested by Roberts' Outfitting, which is also building it. The company declined an interview with CBC, but in its environmental assessment stated its trail rationale was to save costs in transporting goods to a nearby camp, which currently have to be flown in.

To Gale and others the ATV trail casts doubt on the river's designation as a Canadian Heritage River.

"That title is very significant," said Don Hustins, a former chair of the Canadian Heritage Rivers Board. He said it's a hard status to achieve, with only 40 or so such rivers reaching that designation in the country.

"It's a very special place, as a Canadian Heritage River, like Gros Morne would be, like Cape St. Mary's would be, set aside to protect the natural features."

Following the area's management plan is critical, Hustins said, and allowing ATVs "is going to put a lot of pressure on the natural resources of that area and probably in all likelihood, affect the values for which the park was established."

Hustins said that might cause the board to reconsider the river's heritage status, and losing that would be "a big embarrassment" for the province.

"That demonstrates we can't properly manage our special protected areas. That's not good at all," he said.

Attempts to undo the trail

It's not clear if the entire trail has been built. The provincial government could give no timeline for its completion, and neither Gale or Hustins were certain if it was finished either.

Whatever shape it's in, Gale and Hustins want it undone.

"We want that area, the road itself, decommissioned. We want it rehabilitated. And we want government to live up to its agreement — no ATVs in the protected area," said Gale.

He said he, along with towns in the White Bay area, has written to Tourism Minister Steve Crocker and Premier Andrew Furey to complain. Gale has also requested a meeting with Furey, who is also the area's MHA.

Gale is ready to re-invoke a local movement that sprang up years ago to stop logging in the area and have the park established.

"We don't want to go back into a fight. Years ago, we assumed this fight was over, but looks like we're, you know, we're doing it right back into it."