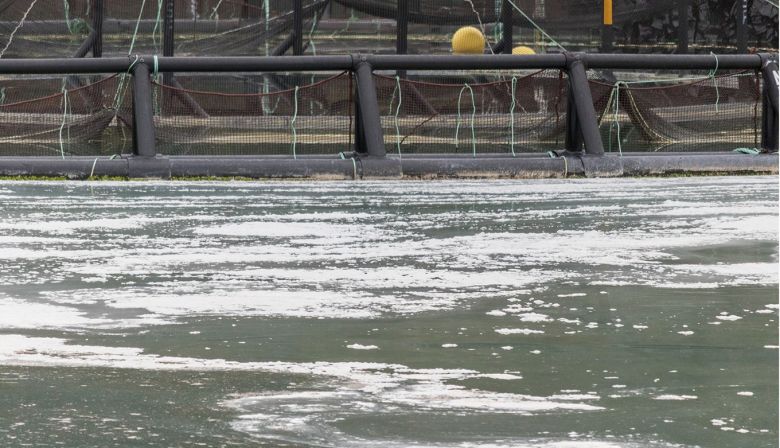 Many kilometres of inshore waters and shoreline are clogged with the effluent from the cleanup of the dead farmed salmon in Fortune Bay. Atlantic Salmon Federation/Bill Bryden
Newfoundland and Labrador Coalition for Aquaculture Reform (NL-CAR) strongly criticises government’s handling of Northern Harvest mortalities.

In a press release on Thursday, the NL-CAR, an organisation comprised of 28 groups and individuals “fed up with the damaging status quo of the industry”, writes that “the only thing that smells more than the widespread kill of Atlantic salmon at the Northern Harvest Aquaculture farms on the province’s South Coast is the way the provincial government is handling this environmental catastrophe”.

It added that “no one believes the salmon laden pink water is harmless to the marine environment”.

On Thursday, SalmonBusiness reported that NL fisheries minister Gerry Byrne said that the number fish is impossible to be more than two million salmon since that is the capacity of the pens. He also questioning CBC’s coverage of incident tweeting: “I suggested that people reflect, as with the seal hunt, science is a better resource for conclusions then photos”.

Newfoundland and Labrador Coalition for Aquaculture Reform (NL-CAR) spokesperson Leo White said: “This is the fundamental problem that must be tackled before there can be any stability and accountability in this beleaguered industry. A policy and regulatory framework must be developed with all stakeholders at the table which will provide public knowledge and public oversight. We need regulation and policy which will prevent such disasters from occurring in the first place. Without that the industry will continue to self-regulate and similar disasters will continue to occur.”

“NL-CAR is not opposed to responsible aquaculture but we do have very serious concerns about how the industry is regulated and operated. We represent more than 20 organizations from First Nations, Environmental, Wildlife, Fisheries and Salmonid Conservation groups”.