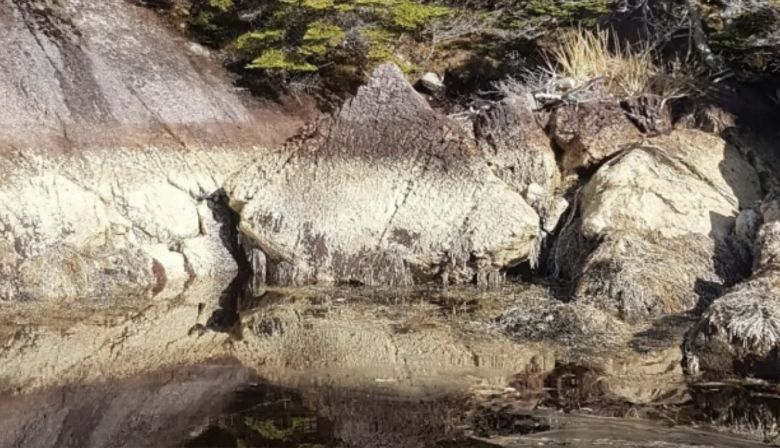 The shoreline at a location called Little Burdock Cove in Fortune Bay, N.L., is seen covered in salmon fat on Nov. 5. (Photo by MAMKA)
One of the fisheries technicians who monitored the Fortune Bay coastline following a massive salmon die-off last year says the impact was not widespread or devastating.

"It wasn't major, in my opinion," Dean McDonald of Conne River told CBC News on Wednesday.

"There was a bit of grease on the shoreline, no doubt. Certain places it did gather up, which kind of looked bad. But after visiting the sites several times, we seen it dissipate, significantly."

He helped carry out an investigation of shoreline not far from sea cages where 2.6 million farmed Atlantic salmon perished last summer because of what the owners, Northern Harvest Sea Farms — which hired MAMKA to do the monitoring — have described as unusually warm water temperatures.

An interim report into that monitoring effort has been completed and obtained by CBC News. It reveals that salmon fat deposits were found on less than three per cent of 50 kilometres of shoreline that was surveyed.

And that much of those deposits have since been washed off the shore, said McDonald.

The investigation did not find any evidence that birds were affected.

"I didn't think it was too bad. There was a bit of grease coverage, but we never found any dead birds, or anything other than a bit of grease on the shoreline," McDonald said.

McDonald, a commercial fish harvester, said he isn't concerned the die-off will impact his livelihood.

"Not one bit, for me," he said. "I've been on them sites and from what I first seen up until just before Christmas, no, I have no concern myself."

The Department of Fisheries and Oceans, in a statement to CBC, said the report is consistent with its surveillance activities, "which showed a few locations having a higher degree of organic deposits, but no widespread impact to the coastline."

And while "fatty material persists in some localized areas, much of the material previously seen on beaches and in coves has dispersed."

The die-off reignited a debate over the environmental risks associated with open-net pen aquaculture, threatened the livelihood of hundreds of people working in the industry, and eventually prompted the government to suspend some of Northern Harvest's licences after the full extent of the die-off was revealed.

MAMKA is a joint aquatic resources and oceans management program of the Qalipu Mi'kmaq First Nation Band and the Miawpukek First Nation, with offices in Corner Brook and Conne River, respectively.

Because of poor weather, only seven of 10 aquaculture sites were monitored prior to the release of the interim report. The remaining sites will be investigated before a final report is released.

The monitoring was carried out using visual inspections of the shoreline, and video gathered through the use of aerial drones.

In some areas where salmon fat deposits were discovered, permanent cameras and grid transects were installed to monitor the shoreline.

Monitoring of the potential impacts below the water's surface will take place when weather conditions are better, according to the report.

But McDonald said one test using an underwater drone did not find anything out of the ordinary.

"There was no grease. No pieces of fish. No dead anything other than a broken dinner plate on the sea bottom."

Meanwhile, efforts by DFO to do similar environmental monitoring have stumbled.

In early December, the federal government issued a request for proposals to a pre-qualified list of companies for monitoring that would complement the work done by MAMKA.

But all the quotes exceeded the $100,000 threshold that requires DFO to advertise the RFP more broadly.

Since a new tender process would delay the monitoring, a DFO spokesperson said, the federal government is looking at options to get the work underway "as soon as possible."

The DFO plan is to collect water, sediment and fish sampling at four sites, on three separate occasions, after which an analysis of the samples will be completed.

Through further monitoring, DFO hopes to determine how waste from the die-off spread, and determine the long-term environmental effects.

CBC has requested comment from Mowi but has received no response.