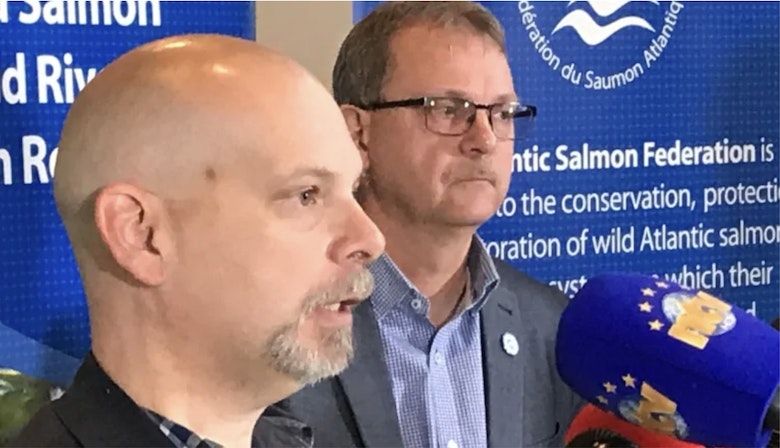 Steve Sutton, left, of the Atlantic Salmon Federation speaks with reporters at the Fluvarium in St. John's on Thursday about an expansion to a salmon hatchery in Stephenville. At right is Don Ivany, the federation's director of programs. (Terry Roberts/CBC)
The embattled aquaculture industry in Newfoundland and Labrador once again came under fire Thursday, and this time the target was a plan by Northern Harvest Sea Farms to dramatically expand its salmon hatchery in Stephenville.

Northern Harvest, which is owned by Norwegian aquaculture giant Mowi, is already in the spotlight over a massive fish die-off on the south coast that resulted in suffocation of 2.6 million salmon, and reignited a public debate over the merits of this controversial industry as a cleanup continues.

Now that same company plans to increase production by investing $60 million to expand the Indian Head hatchery, a move that would see smolt production increase from 4.5 million to 6.7 million annually.

The Atlantic Salmon Federation says the expansion should undergo a broad study to determine how the millions in additional salmon will affect the marine environment on the south coast, where they will be raised in sea cages to a marketable size.

But the organization that represents the aquaculture industry says that's not necessary.

At a news conference Thursday in St. John's, the federation called upon Environment Minister Derrick Bragg to restart the environmental process for the project.

"The full extent of the environmental impact of increased smolt production cannot be understood unless the potential effects of those fish on the marine environment are also examined," said the federation's Steve Sutton.

The company was given permission by the environment department for the expansion a year ago, following a review that scrutinized the environmental impact of the hatchery.

But this review did not extend to how the additional salmon would be farmed, or the conditions in which they would be contained.

The matter is expected to make its way to the province's Supreme Court early next month, with a group called Ecojustice seeking to quash the province's decision to release the hatchery expansion from the environmental assessment process.

"Given recent events, it is unconscionable that the provincial government and Mowi will go to court next month and spend taxpayers' dollars to argue that the company should be allowed to put more fish in the sea cages without any environmental assessment," said Sutton.

Critics want the company to submit a full project description that details how the additional smolt will be farmed on the south coast, which they hope will lead to a full environmental assessment of the project.

"All we know is that a large number of additional smolts will be placed in the same sites affected by the recent mass mortality event that has triggered one of the worst water pollution events in Newfoundland and Labrador history," Sutton added.

Northern Harvest officials have blamed the fish die-off on unusually warm water temperatures over a prolonged period in late August, and have admitted that sea cages may have played a role in the disaster because they did not extend deep enough into the water, preventing the salmon from reaching cooler depths.

The company has pledged to modify its equipment in order to avoid a similar die-off in the future, but that's not enough for Sutton.

"When it comes to marine-based salmon aquaculture in Atlantic Canada, the status quo is no longer good enough. Whether it's covert campaigns of illegal pesticide use, unreported escapes, excessive antibiotic use, or the attempted coverup of millions of dead salmon, this industry has benefited long enough from the blind eye of regulators and the preferential treatment of politicians," said Sutton.

The provincial government is not commenting.

"As this involves a matter that is before the court, no comment will be made at this time," the environment wrote in a statement to CBC.

But the executive director of the Newfoundland Aquaculture Industries Association, Mark Lane, is opposed to further scrutiny.

Lane attended the salmon federation's news conference, and immediately spoke with reporters after it concluded.

He accused the salmon federation and its allies of trying to stall the hatchery project, and said the south coast aquaculture sites have already passed through an environmental assessment process.

"What I think they're asking for is a repeat of environmental assessments on already approved sites, which really doesn't make a whole lot of sense. I'm not sure what you would achieve by doing that," said Lane.

Lane went on to defend the aquaculture industry, saying some valuable lessons have been learned from this summer's disaster, and that the industry is already highly regulated.

"We need to stand behind the hard working farmers that we have on the south coast. This is all these communities have," he said.