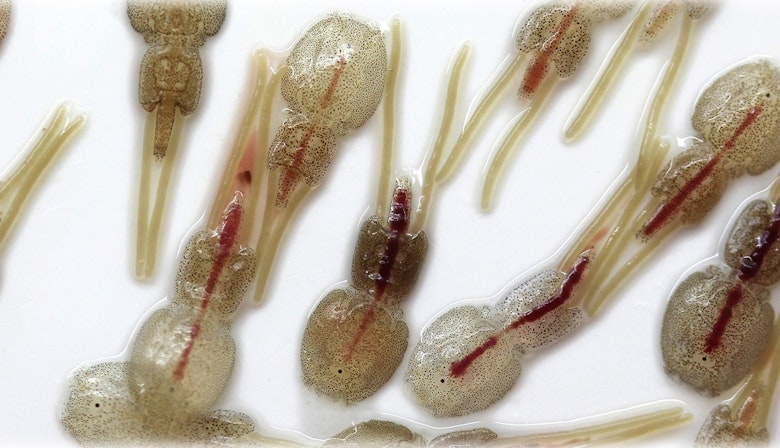 Sea lice at epidemic numbers are bringing about a new system of government control of farmed salmon production. Photo Sussie Dalvin
On Wednesday, during the Teknas Aquaculture Conference in Bergen, Norway, Fisheries Minister Harald Tom Nesvik spoke on the “traffic light” system that will divide the country’s west coast into 13 zones.

There is a great deal of tension in the industry in regards to what the different production areas will land on. Each zone will be given a green, amber, or red light, based on the sea lice pressure in the given area. The new regulations have been developed in an effort to reduce the impact of lice on wild salmon.

A green light means farmers might be offered production growth, a red light means reduction, while amber means it has to stay where it is.

The conclusion is imminent.

“Later in the autumn, the colouring of traffic lights will be adopted. This is something I am working on now,” said Nesvik.

“I’m not going to say anything about it now. This is because it is stock-sensitive information,” he said.

Still, he chooses to say a good deal more about the traffic light system.

“I’m not going to say here what colour will be here. The decision will be made in December. But what I can say is ‘this time I want to put on the red light'”, he said with a raised voice.

“It has not been done before, but it will happen now. This means that there may be a capacity adjustment for those who are not environmentally responsible”.

“The reason I want to use the red light is that it would be pointless to have a growth regime if one cannot make adjustments for those who do not act environmentally responsible. This environmental impacts researchers now calculate – how high salmon lice mortality is on wild salmon. Later this fall I want to make a decision on this in the ministry”.

He does not hide the fact that the growth regime, and licensing decisions, will require a lot of time.

“It is important that a thorough assessment is made. If not, I will spend the next few years in courtrooms around the country. There are two things that are important to me: sustainableilty and fish health”.

“In some areas, production will have to be reduced,” he said.

“We know that the Hardanger Fjord is a challenge. It has been for years. But we will see what the scientists find out”.