Mar 16, 2021
Hatchery will be located on Digby Neck in Centreville 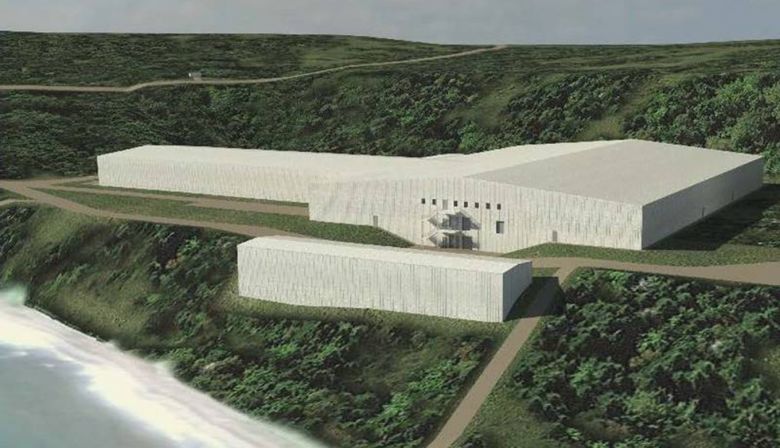 Artist's rendering of the new Cooke hatchery on Digby Neck.
Cooke Aquaculture has been granted a provincial licence for a $58.6-million Atlantic salmon hatchery in Digby County.

The application for a 10-year licence for the land-based hatchery, through Cooke's subsidiary Kelly Cove Salmon, was approved by the Nova Scotia Department of Fisheries and Aquaculture on Thursday.

In an emailed statement he said Cooke is "pleased to have received approval" for the hatchery from the province.

The public decision package included all 14 public submissions weighing in on the proposal, which were mostly in favour of the project.

A letter from Harold Locke, the mayor of Shelburne, said that the new site would have a "positive ripple effect" for many Nova Scotia communities and be an "incredible economic impact" for the province as a whole.

The hatchery, based in Centreville on Digby Neck, would grow salmon from egg to smolt, prior to release into the ocean for rearing in open-pen fish farms.

It is expected to create 16 full-time jobs when completed. Construction is expected to take three years and generate 450 jobs and $26 million in wages.

Salmon to be grown above-average size

The facility grows fish longer on land and releases them larger into the ocean, reducing time at sea where they are more susceptible to disease and weather.

Normally fish are grown to 125 grams at hatcheries, but these salmon would be 500 grams before release.

Edwin Chisholm, CEO of the Digby Harbour Port Association, wrote that Kelly Cove has been a client for 12 years and brings a major economic boost to the area.

In a letter supporting the project, Chisholm said the hatchery advances the production of farmed fish in the area and the increases in employment and economic spinoffs will "help stabilize the area."

A few residents and groups wrote in about their concerns for the hatchery, including how effluent from the site would be treated and handled, whether it would be piped into St. Marys Bay to potentially impact lobster or other fish, and the environmental impact of the facility's large water intake.

The province briefly addressed these concerns in their decision, saying that Kelly Cove must follow requirements from the Environmental Monitoring Program to ensure all effluent meets provincial and federal standards.

Linda Gregory, Digby County's warden, told CBC in January that she accepts assurances from the company that its hatchery will be environmentally friendly.

As part of their licence, Kelly Cove must now put together a management plan before it can begin operations.This plan covers fish health, containment, environmental management and farm operations. It will be reviewed by the province.