Jul 29, 2019
It says prosperity. It’s synonymous with the accumulation of wealth. It’s a gold mine. 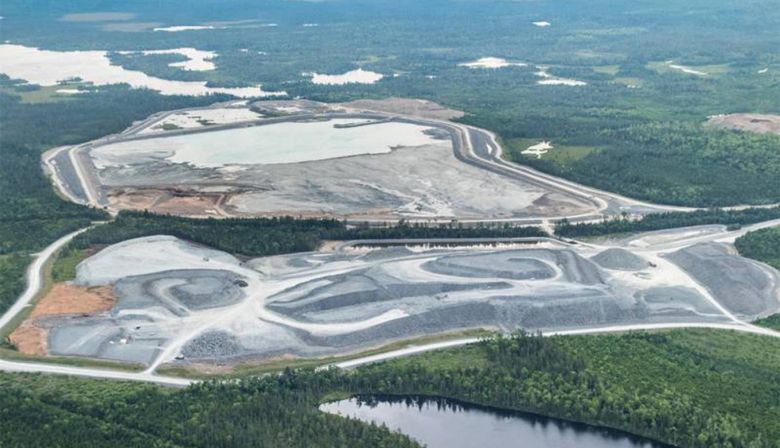 Moose River Gold Mine. Photo Ray Plourde
Nova Scotia — or at least the government of Nova Scotia — is bullish on gold mining.

The province’s gold coast — the Eastern Shore — is dotted with gold claims and home to the province’s biggest producing gold mine — Touquoy — located at what Atlantic Gold calls its Moose River Consolidated mine.

The Moose River site’s open pit mine and production facilities cover an area of about 1,760 hectares. For scale, that’s a land mass greater in size than most towns in Nova Scotia, except Truro, which is twice as big as the others and includes Victoria Park, 400 hectares of the most majestic urban parkland anywhere, but I digress and confess a hometown bias.

Atlantic Gold has consolidated its production facilities at Moose River and intends to truck crushed ore there for processing from three other properties it, or its subsidiaries, own on the eastern mainland.


The Beaver Dam mine, about 35 kilometres from Moose River, is fast approaching the production phase.

The other two proposed sites, at Fifteen Mile Stream some 57 kilometres east of Moose River and Cochrane Hill, perhaps the most controversial site of the four, located near the St. Mary’s River, are still in the early stages, with environmental approvals pending.

It was at a public information session about the Cochrane Hill mine where Atlantic Gold officials called the cops to a disturbance that only they perceived. A perfectly law-abiding, civic-minded citizen of Nova Scotia was hauled off by a Mountie who did the company’s bidding without hesitation. The arrested man’s only possible transgression was asking a question the mining company found inconvenient. Perhaps it exposed one or more of the litany of environmental risks inherent in gold mining.

The massive wound inflicted on the earth is only the most visible environmental insult from gold mining.

Modern industrial gold mining devastates landscapes and creates huge amounts of toxic waste. Some estimates run as high as 20 tonnes of toxic waste for every 0.333-ounces of gold — about enough for a ring.

The waste is frequently laden with cyanide and toxic heavy metals. The toxic brew is held in tailings ponds, sometimes treated and sometimes not, before it seeps into ground or surface water.

Toxic waste spills from gold mining operations are common. In 2014, a dam collapsed at the Mount Polley gold and copper mine in British Columbia, sending about 25 million cubic meters of cyanide-laden waste into nearby rivers and lakes. The spill poisoned water supplies, killed fish, and decimated local tourism.

Atlantic Gold estimates its Eastern Shore mines will eventually create up to 350 jobs, and that’s the number that grabs the government’s attention. Provincial royalties certainly aren’t enough to turn many heads.

The province only collects a royalty of one per cent on the net profits from a gold mine. For example, Atlantic Gold’s financial statements show revenues of more than $128 million in 2018, but a profit of just slightly more than $27 million. The province’s royalties, calculated on the net profit, would amount to about $270,000.

The province also requires the mining company to post a reclamation bond, which is supposed to be sufficient to return the land to some semblance of nature after the mine is worked out. Atlantic Gold has posted an $8.3 million bond and the Department of Energy and Mines said it is “on schedule” to increase that to $10.5 million.

That is a lot of money, but when you consider that the Moose River site alone is about the same size as Kentville, $8 to $10 million in reclamation funding can get used up in a hurry.

The Eastern Shore isn’t the only area the province is hawking. The government is looking for a company to explore the hills of northern Nova Scotia, from Wentworth to Warwick Mountain, the watershed for the village of Tatamagouche, in search of commercial gold deposits.

Like the Cochrane Hill mine, the Warwick Mountain project will have difficulty gaining the social licence to proceed.

Folks in St. Mary’s don’t want their iconic river jeopardized for a few mining jobs, and folks in northern Nova Scotia aren’t willing to risk pristine nature and clean water, even if there’s gold in those hills.