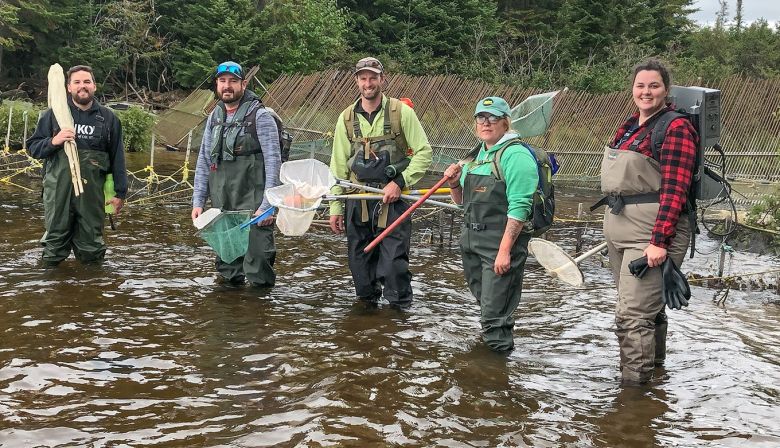 A team from Anqotum, the Atlantic Salmon Federation and the Miramichi Salmon Association search for invasive smallmouth bass in Miramichi Lake during the fall of 2019. Project partners are trying to remove as many smallmouth bass as possible, prior to eradication, to prevent their establishment in the Miramichi River system. Photo Atlantic Salmon Federaton
First Nations organizations and non-governmental organizations have developed a plan to undo one of the most selfish, costly crimes ever committed against the New Brunswick environment. We're ready to eradicate smallmouth bass from the Miramichi watershed, where they were illegally introduced over a decade ago.

It only took a few smallmouth dumped from a bucket into Miramichi Lake for these aquatic invaders to become established. It will take one of the largest direct conservation actions in New Brunswick history to eradicate them.

Our plan calls for the use of rotenone in Miramichi Lake, Lake Brook and approximately 15 kilometers of the Southwest Miramichi River. It will kill most gill breathing organisms, while other plants and animals will be unaffected, setting the stage for ecosystem recovery without invasive smallmouth bass.

No one relishes the idea, but the alternative is far worse: The widespread colonization of smallmouth bass in lakes, rivers and brooks throughout the Miramichi watershed, where they will consume and compete with trout, salmon and other native species. It would be immoral and weak to allow the actions of an individual to determine the future of another New Brunswick ecosystem.

Since the moment in 2008 when a smallmouth bass was caught in Miramichi Lake, groups like ours have called for eradication with rotenone. It's the most common method of dealing with aquatic invasive fish worldwide.

Decades of experience and a large body of science show rotenone formulas are effective, break down rapidly and do not persist in the environment.

Rotenone was used by the New Brunswick Department of Natural Resources to successfully eradicate chain pickerel from another lake in the Miramichi watershed in 2001. The Department of Fisheries and Oceans (DFO) authorized the treatment with little fanfare. Since then it has been used dozens of times in other provinces, including a successful campaign to eradicate invasive yellow perch and smallmouth bass from 12 lakes in British Columbia's Thompson River watershed.

In each case the rotenone formula vanished, ecosystems recovered and the birds, reptiles, animals and people nearby were unharmed. Yet when smallmouth bass were found in Miramichi Lake, the issue became a hot potato continuously passed between federal and provincial governments, with neither willing to take decisive action.

The federal government owns the issue of aquatic invasive species. Under the federal Aquatic Invasive Species Regulations, some provinces, like Nova Scotia, have taken on the ability to authorize eradication projects. New Brunswick elected not to.

The laws and regulations were not designed for a collection of First Nations organizations and NGOs to walk in of fthe street and fill out an application. This work is normally carried out by governments. Our eradication project is the only one we know of, with a First Nations organization in the lead and NGOs as partners. Nevertheless, we have brought in experts and developed a plan that rivals any in the world, one that has been scrutinized in painstaking detail by federal and provincial agencies.

And recently we have had help.

The province of New Brunswick has committed to work with us through the treatment and Fisheries and Oceans Canada has done double-time, liaising with other departments and clearing unexpected obstacles during their final review of the application to eradicate.

Yet despite this progress, the guillotine still hangs by a fraying thread over the Miramichi ecosystem. Smallmouth bass are now in a section of the Southwest Miramichi river and the window to eradicate in 2020 is closing. We still await DFO's answer pending completion of their duty to consult First Nations.

Cynics have said salmon are done anyway. They've played the tired game of whataboutism, pointing to other problems affecting salmon as though that nullifies the issue of invasive species. Well, the Miramichi River system still has the largest population of wild Atlantic salmon in North America, and collectively our groups are addressing the suite of threats.

If we turn our back and let smallmouth bass find new homes throughout the watershed, an ecosystem that has supported the same composition offish for thousands of years will be forever altered. As guardians and conservationists, we will not let that happen.