Our worst nightmares are being realized 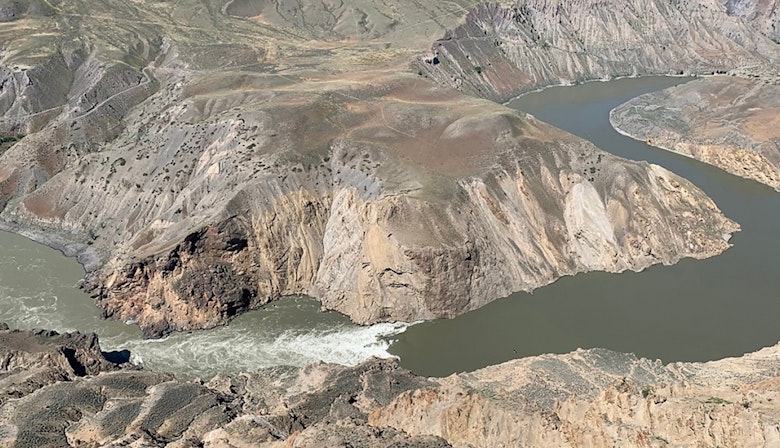 The Big Bar Landslide, above Lillooet on the Fraser River, conceivably could bring some salmon populations to extinction. Photo B.C. Ministry of Forests, Lands, Natural Resource Operations and Rural Development
In the aftermath of a massive landslide on B.C.'s Fraser River, just a single female chinook salmon managed to complete the journey to her spawning grounds in Valemount's Swift Creek, according to a local conservationist.

"She swam back and forth and eventually died all by herself," said Dustin Snyder, vice president of the Spruce City Wildlife Association in Prince George.

"There's multiple streams up here that didn't see any fish return and the ones that did see fish have seen very few."

That didn't come as a surprise to Snyder.

"We've seen these stocks continuously decline, and what the Big Bar situation has done is really bring them to their knees," he told CBC.

Those familiar with the state of salmon stocks on the upper Fraser say immediate action is needed to address the devastating impact of the landslide, and one of the first steps needs to be granting more power to First Nations and other local bodies.

Chief Terry Teegee, B.C. regional chief for the Assembly of First Nations, said the transfer of authority would allow Indigenous groups to "make proper decisions" based on longstanding, firsthand knowledge of the crisis.

That call was echoed by Bill Valentine, a former B.C. deputy minister for fisheries who sat on the Pacific Salmon Commission from 1993 to 2000.

"We now need to figure out aggressively what needs to be done," he said. "That means regional bodies and First Nations need to be moved ... from consulting on fisheries into a role where they play a significant role, making management decisions."

The Big Bar slide created a five-metre waterfall on the Fraser north of Lillooet in October or November 2018, making it impossible for migrating salmon to push through to their natal streams.

In an attempt to save this year's runs, more than 60,000 fish were captured, stored in tanks, and then lifted past the obstruction by helicopter over the summer. Others managed to swim past after water levels fell.

But despite those efforts, this year's returns are looking grim.

On Oct. 16, federal government scientists told the Pacific Salmon Commission that three salmon runs now face a "meaningful chance of extinction" as a result of the landslide, according to a PowerPoint presentation obtained by CBC News.

The presentation suggests the landslide has created "massive negative implications" to salmon in the Fraser, and at least three other runs are at "considerable risk" depending on water levels in the river next year.

Tegee said that governments have been too slow to react to threats to the salmon, including the Big Bar slide.

"I think our worst nightmares are being realized," Teegee said.

He said that when he was tribal chief for the Carrier Sekani Tribal Council, fisheries management rarely reflected the emergency situation he was seeing on the upper Fraser.

Valentine said that during his time on the Pacific Salmon Commission, the focus was too often on making sure that Canadian fishermen had an equal share of the catch compared to their American counterparts, rather than conserving the future of the salmon.

In recent years, he believes the management approach has been too segregated, treating salmon stocks as a separate issue from forestry, mining or the environment in general. Changing that approach is especially critical now that the effects of human-caused climate change are being felt in the aquatic environment.

Earlier this week, the federal government put out a request for information for ideas to clear out the landslide to allow fish to pass through naturally.

But the presentation provided to CBC points out that as of October, zero tonnes of rock had been removed from the slide area, and there's a "good chance" that natural passage won't be restored in time for the 2020 salmon run.

The federal and provincial governments, alongside multiple First Nations, have worked together to respond to the landslide at Big Bar.

In an email, a B.C. government spokesperson said the province "will continue working with our partners over the coming months to undertake the important efforts required to protect salmon."

A spokesperson from Fisheries and Oceans Canada said the health of Pacific salmon is a central priority for the ministry in B.C. and it will continue to work with Indigenous and community partners to protect the species.

It added it will also be meeting with First Nations, partners and stakeholders to provide updates on next steps.