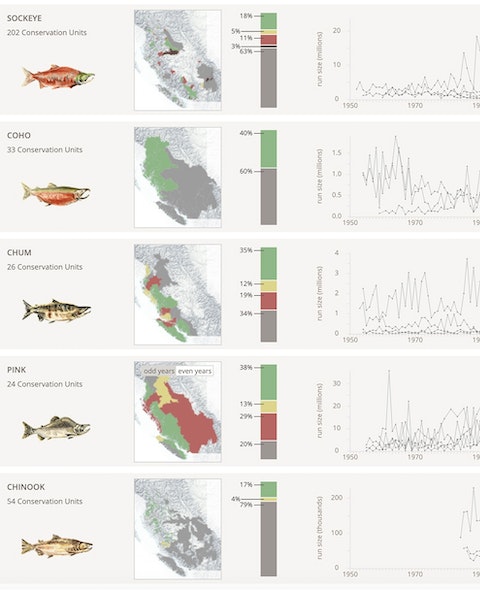 The Pacific Salmon Foundation has added some features to their online data visualization tool that shows where salmon are returning to spawn throughout British Columbia.

The online tool, which provides data for 80 per cent of salmon in the province, now shows data for southern B.C. salmon in addition to the North and Central Coast, as well as trends and summaries per species in B.C. among other features.

Salmon along the West Coast make their return from the ocean to freshwater rivers and streams from mid-June to October, and the number returning to spawning grounds is being tallied.

Jason Hwang, a vice-president with the Pacific Salmon Foundation, says it's still too early to determine precise returns, other than they will fluctuate depending on the river.

"In [some] cases, there are some nice positive indications. It's fairly normal for salmon returns to be variable," Hwang told host Gregor Craigie on CBC's On The Island.

"[But] in this overall story, we are concerned that there seems to be a persistent and significant decline in some populations."

Low numbers in the Fraser

Of concern is the Fraser River, which is forecast to have one of its lowest sockeye salmon returns since records started to be kept in 1893.

Hwang says understanding why some populations have better returns or success than others is a complicated question. There are broad issues, like the warming North Pacific Ocean, and local issues, like the amount of spring run-off, that can all affect salmon survival.

"A lot of the great work that is being done to help salmon is being led by community organizations, and they're doing tremendous things to restore habitat, operate community hatcheries, undertake monitoring and citizen science in the area."