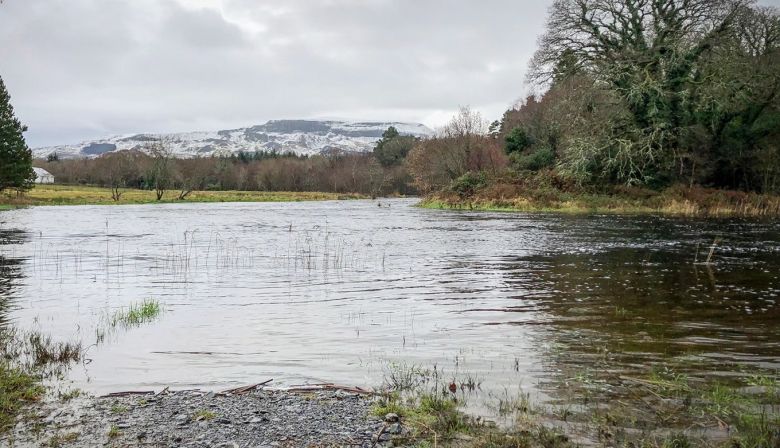 Drowes River on the border of Leitrim and Donegal. Inland Fisheries in Ireland is saying rivers in Donegal and Mayo are being targeted by poachers.
Inland Fisheries Ireland (IFI) says it has recorded a significant increase in salmon and trout poaching since the outbreak of the novel coronavirus in late March.

The length of nets being used to poach wild fish has increased substantially, it says, which is an indication that poachers are making greater efforts to catch salmon and trout.

Greg Forde, the head of operations at IFI, said the agency had seized 38 nets between April and May, almost four times the number seized between January and March.

The length of the nets, a factor in how many fish can be caught, also increased substantially. Ten nets seized on Irish rivers and beaches between January and March measured just 274 metres in total, while the 38 nets confiscated during the months of April and May measured 2,700 metres.

Most of the nets were seized in estuaries, leading the IFI to believe they were cast to catch salmon and sea trout as they prepare to enter rivers to spawn.

“Poachers appear to be targeting sea trout and salmon from the seashore,” Forde said. “This poses a problem as it’s difficult to apprehend people who engage in this type of poaching, as it’s almost impossible to catch them in the act.”

Salmon numbers on Irish rivers have fallen in recent years, with the blame falling on commercial farming and climate change. Each wild salmon that returns to breed in an Irish river is considered important to the survival of the species overall. Most anglers release salmon and large trout that they catch on Irish rivers in an effort to conserve the species.

“These fish are returning to breed and are crucial to the national stock,” said Forde. “Poaching places fish stocks at risk. It’s still very early for salmon, so what we are seeing is an attempt to catch ones arriving to spawn early,” he added.

Salmon rivers in Mayo and Donegal are being actively targeted, according to Forde. It is unclear whether the fish are being caught for local consumption or for commercial purposes.

Forde said the IFI attributed the increase in poaching to the pandemic. “We suspect people have more time to spend outdoors since the government closed down many businesses. Some of these people are poaching,” he said.

Pádraic Fogarty of the Irish Wildlife Trust urged the government to establish a wildlife unit within the gardai to pursue criminals involved in poaching and related crimes.

“Salmon are going extinct in Irish rivers. Poaching is contributing to their decline. The news that salmon poaching is on the increase doesn’t surprise the trust. It just reaffirms our view that Garda Headquarters urgently needs to set up a unit to deal with this,” he said.