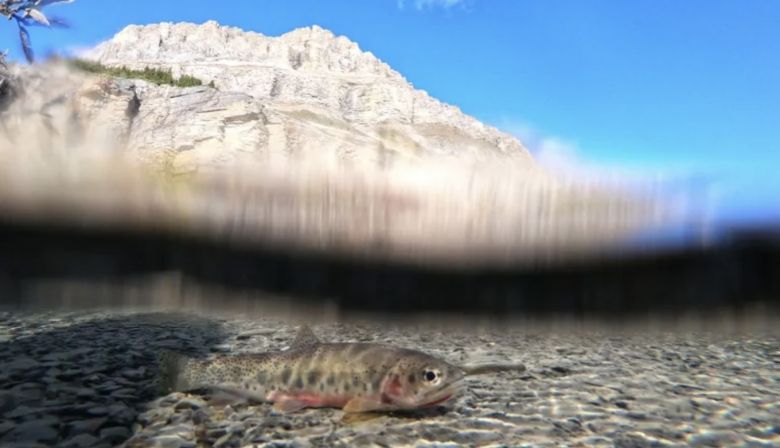 Westslope cutthroat trout are threatened in Alberta. In Banff National Park, some of the main challenges for this fish are competition with non-native brook trout and hybridization with non-native rainbow trout or Yellowstone cutthroat trout. Photo Parks Canada
Parks Canada is in the process of killing and removing fish from remote mountain fishing lakes and streams in Banff National Park — but the work is necessary to protect an at-risk species that is native to Alberta, officials say.

Helen Lake and Katherine Lake did not have any fish until the 1940s and '50s, when several species were introduced for recreational fishing, Parks Canada aquatics specialist Shelley Humphries told CBC News.

But the introduced species — eastern brook trout in Helen Lake and yellowstone cutthroat trout in Katherine Lake — threaten westslope cutthroat trout, an at-risk species that should be found in the outlet streams below.

"Our values and our thinking have changed [since the '40s and '50s], and so we actually are not intending to reintroduce fish into Helen Lake itself, or Katherine [Lake]," Humphries said.

"Over the next two years, our plan is to remove all the non-native fish from the two lakes and the stream. And then, when we've completed that, we plan to reintroduce threatened westslope cutthroat trout into the stream and the valley."

And though eastern brook trout are considered an at-risk species in eastern Canada because of acid rain and warming temperatures, they have deemed invasive in Banff.

Meanwhile, Katherine Lake's yellowstone cutthroat trout is an American sub-species of trout that does not actually belong in Canada.

"We know that we have a strong constituency of people in the park who feel that part of the reason national parks exist, and our mandate, is to protect species at risk," Humphries said. "And so they're very supportive."

"We started with manual methods; we tried netting, fishing and angling, and we weren't successful," Humphries said.

"So we got some special training. We went down to the United States and we learned how to use a special chemical called rotenone."

Rotenone is a chemical that has been used to clear lakes of fish and protect fish species in the U.S.

Derived from a plant in the tropics, rotenone enters the fish through the gills, is quickly absorbed into the blood, and then interferes with a fish's cellular ability to process oxygen, Humphries said.

Word of the use of chemicals in Lake Helen and Lake Katherine prompted some long-time lake users to voice concerns to CBC News.

Similar plans have also attracted controversy in provinces such as New Brunswick, where rotenone is planned to be used in the Southwest Miramichi River to eradicate smallmouth bass — an invasive species viewed as a serious threat to endangered Atlantic Salmon.

The proposal was put forward by a coalition of First Nations and salmon conservation organizations, while cottage owners along the Southwest Miramichi River have expressed concern about both the cleanup of the dead fish and the use of chemicals.

But according to Humphries, rotenone biodegrades in water and is highly toxic to fish but should not harm the wider ecosystem.

"It's fascinating," she said. "[Rotenone] is very rapid, and extremely specific to fish."

Project will span a couple of years

While the chemical can affect amphibians that are in their gill-breathing stage, park specialists know to use rotenone when the areas are clear of them, Humphries said.

Otherwise, zooplankton, small organisms that typically drift with the currents, and phytoplankton, a microscopic marine algae, can be affected. However, Humphries said that they recover "all by themselves, within a year or two."

"In the United States … they've had great success [with rotenone], and they are actually getting to the point where they're talking about potentially starting to delist some of their listed fish," Humphries said.

"And it's through using this type of tool that works at a landscape level."

The current projects in Banff are expected to take a couple of years to complete. The process to remove the fish from Helen Lake began Aug. 10 and is to be finished this year, while fish removal in Katherine Lake is slated to start in 2021.