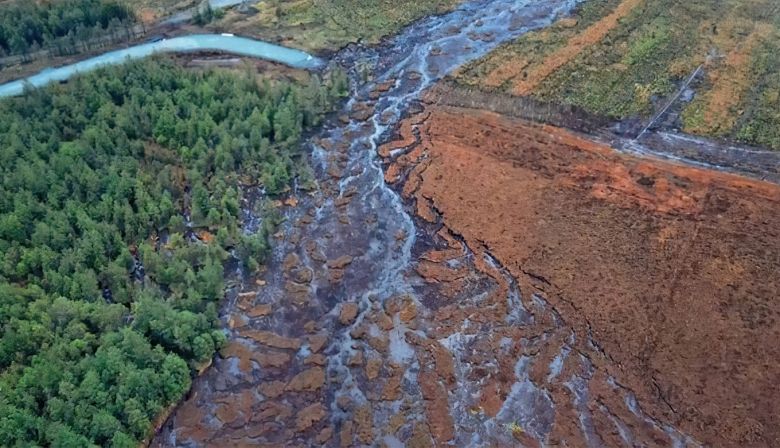 The quantity of peat in the landslide that entered the Derg River, a tributary of the Foyle, remains uncertain. Photo Patrick Collins
A bog collapse which affected an internationally important salmon spawning river in County Tyrone has been raised in the Dáil.

The collapse happened at the site of a wind farm under construction at Meenbog, near Ballybofey, County Donegal, last Thursday.

A large quantity of peat slid down the hillside and ended up in the Mourne Beg River near Castlederg.

It is a key spawning river for Atlantic salmon - a protected species.

The waterway running into the Derg is shown clogged with peat

The river flows into the Foyle catchment which has EU protection as an important salmon habitat.

Work on the wind farm development has been suspended and several agencies on both sides of the border are investigating how it happened.

Donegal independent TD Thomas Pringle raised the incident in the Dail and said concerns about the wind farm had been well flagged by environmentalists.

He said pictures of the collapse made for "stark viewing".

Taoiseach Micheál Martin said he was aware of the case and wanted to progress guidelines on future wind farm development.

The Irish Environmental Protection Agency, a statutory body, said there would be another meeting in the coming days involving all those investigating, to co-ordinate any further necessary response.

The Ulster Angling Federation (UAF) has warned the river may struggle to recover fully from the landslide, which a spokesman labelled one of the largest pollution events in the history of Northern Ireland and Ireland.

He said anglers were devastated and were expecting a complete fish kill in the Mourne Beg.

The company building the wind farm, Invis Energy, said they were working with the authorities and there was no risk to public health on the day of the landslide.

Authorities on both sides of the Irish border have moved to assure the public there is no risk to drinking water quality.

However, NI Water temporarily suspended drinking water supplies connected to the river as a precaution.