Jul 4, 2019
The Penobscot River is enjoying its most productive Atlantic salmon run in the past decade. 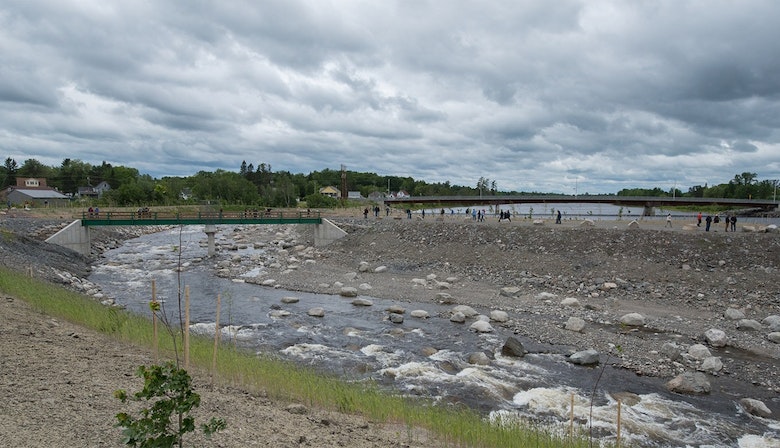 The dam bypass at Howland, where the Piscataquis meets the Penobscot, is a state-of-the-art fish passage that would now be having Atlantic salmon passing upstream. Tom Moffatt/ASF
As of Tuesday, 855 salmon had been trapped or counted at the Milford Dam, with another 35 fish trapped on the Stillwater Branch of the river, according to fisheries scientist Jason Valliere of the Maine Department of Marine Resources.

“We have officially surpassed end-of-year total trap counts for all years since 2011 at the old Veazie Dam fishway,” Valliere said in an email.

According to the historical trend at Milford, the July 2 total should be about 80 percent of the total seasonal run, he said.

The tone was set on June 20, when Valliere reported that 107 salmon had been captured at the Milford Dam lift, which was a single-day record for the facility.

A total of 759 fish were counted at Milford during the entire 2018 season.

The increased salmon returns are good news, even though in February the National Oceanic and Atmospheric Administration and the U.S. Fish & Wildlife Service released their plan for the recovery of Atlantic salmon within the Gulf of Maine population segment. It is estimated that it will take 75 years, about 15 generations of fish, for Gulf of Maine Atlantic salmon to be delisted.

Only then would anglers again have the opportunity to target the coveted fish.

Workers from Brookfield Renewable, which operates the Milford Dam, and representatives of Maine’s Department of Marine Resources have in recent weeks been monitoring the pools below the dam. They want to make sure that Atlantic salmon do not become stranded or stressed in areas that could prove hazardous to their health.