Photographers capture footage of spawning salmon near proposed gold mine

Feb 20, 2020
Atlantic Gold wants to develop the Cochrane Hill mine near Sherbrooke, N.S. 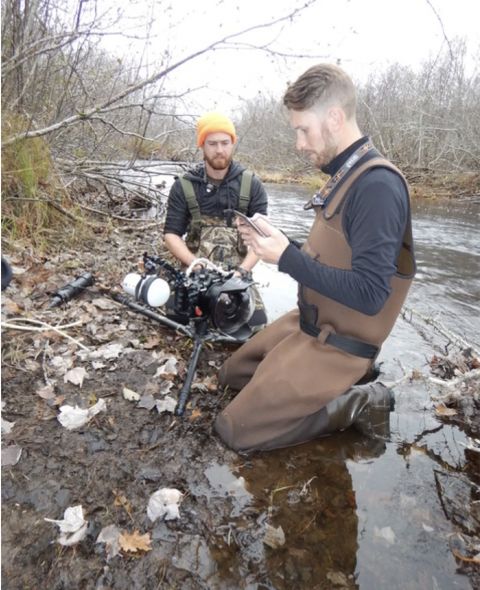 The Atlantic Salmon Federation says it's the first time spawning activity has been caught on camera in Nova Scotia, and proof the proposed Cochrane Hill mine at the headwater of McKeen Brook shouldn't go ahead.

Atlantic Gold, which operates the province's only current gold mine, wants to develop an open-pit mine about 13 kilometres northeast of Sherbrooke, N.S. It would operate for six years, plus one year of development and one to three years of reclamation.

Tom Cheney, a freelance producer who helped capture the underwater footage, said the mine would ruin a sensitive ecological area where Atlantic salmon are actively spawning.

Footage of the salmon, posted on the federation's website, shows a female sweeping her tail back and forth "moving hundreds of pounds of gravel" to create a pit to lay her eggs.

"Knowing that this was going on at our feet, this unbroken cycle that's gone on for thousands of generations, it's just unbelievable. Much more thrilling than fishing for them."

The footage was captured in November by Nick Hawkins and Tom Cheney. (Submitted by Tom Cheney)

The video was released on Wednesday by the Nova Scotia Salmon Association, the St. Mary's River Association and the Atlantic Salmon Federation.

Cheney and photographer Nick Hawkins shot footage over 10 days last November, and it took eight days for them to catch the secretive species on camera.

"It's very difficult conditions," Cheney said. "We were, you know, hours in the water up to our arms in that icy current, setting up cameras and then waiting on the bank hoping something would come."

Salmon tend to spawn at dusk and dawn, so it meant Cheney and Hawkins stayed at the brook until dark and then lugged their equipment back before sunrise.

He said the team found several egg nests in the area.

"It's clearly a site of dense salmon spawning, probably one of the most important spawning sites in that entire St. Mary's watershed," he said.

Cheney worries the proposed mine would take over part of the brook and possibly leak effluent into the water.

He said the sensitive habitat is recovering from acid rain, and that mining activity would disturb naturally occurring pyritic slate, which "then becomes very acidic, and salmon and trout do not mix with acid water."

Atlantic Gold said in a statement it appreciates the conservation efforts of the salmon federations, and that it will review the information they've provided.

The company said protection from any potential harm to salmon would have to be assured before the mine is approved.

The company said federal fisheries laws require that any water leaving the mine site would have to be "clean, strictly monitored, tested and regulated."

It also said its current mine in Moose River, N.S., has operated next to a lake and a wilderness area for more than two years and testing indicates that water and aquatic life haven't been harmed.

A spokesperson for the province's Environment Department said in an email that the Cochrane Hill mine site is currently undergoing a joint federal and provincial environmental assessment which started in November 2018.

"Information on potential impacts to all species, including Atlantic salmon, must be provided in the environmental assessment document," the statement said.

But Cheney isn't hopeful the company will follow through on ensuring Atlantic salmon are protected.

"I don't really believe that Atlantic Gold cares about the biology or the ecology of the area," he said. "If they did, they wouldn't be, you know, proposing to swallow up this sensitive salmon spawning habitat."