Oct 3, 2019
Newfoundland fishermen want more information on whether cleanup will affect them 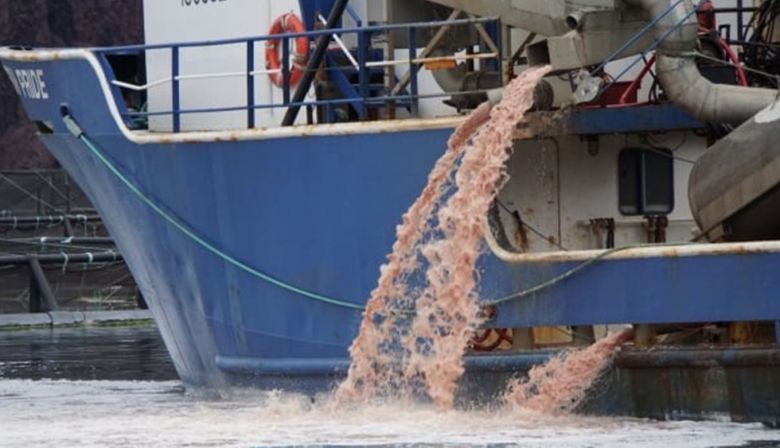 Effluents from dead Atlantic salmon are sent back into the coastal areas of Fortune Bay as thousands of dead farmed salmon are taken from the ocean.
Go to VIDEO by CBC of the cage salmon die-off in Fortune Bay NL

A cleanup operation is underway in Fortune Bay, where Northern Harvest Sea Farms is emptying out its salmon pens following a massive fish die-off.

The company is using divers and has hired large purse seiner vessels from Newfoundland and Labrador and New Brunswick to clean out their pens.

On Wednesday morning, gallons of pink liquid flowed from the side of two large vessels at one cleanup site in Fortune Bay. The company says the pink colouring comes from Salmon pigment, and maintains the substance is harmless.

According to MOWI spokesperson Jason Card, dead fish and water are sucked up from the pens onto the seiners. The fish are separated from the water, which is disposed back into the ocean.

"It dissolves," he told CBC's Here & Now. "It's not an environmental risk, there's no concern there in terms of disease because this wasn't a disease event.

On a smaller barge, three men used handheld nets to pick up matter floating on the ocean's surface.

White matter, which appears to be the remnants of dead fish, has flooded the ocean surface near the pens, spreading for dozens of metres from the boats. That same substance has also accumulated in nearby coves.

Card says the company is committed to cleaning up those coves and beaches, too.

"Folks needn't be worried about the fat as well because the fat is a natural part of the decomposition of fish when they die in the ocean, and it dissolves. So it's not a concern, it doesn't carry any environmental risk."

"It's hard to sleep nighttime now, just to know what I've seen the last couple of days, what is going to the sea," said Gary Snook, who was chartered by CBC News for the trip.

"And anything that's coming behind it, do it live? Does this fat that's on the water, do it dissolve? There's questions out there, we would really like to know."

CBC News requested a tour, and an explanation of the process from Mowi, but the company declined that request. Card said all resources were being used to prioritize the cleanup of the sites.

Northern Harvest Sea Farms operates in several different sites along the south coast of Newfoundland, up to 30 kilometres apart.

While the company maintains warm water caused low oxygen levels in the water and killed the fish, it is also promising a "complete overhaul" of its gear and its cleanup plans.

"The fish mortalities pose no harm to humans, the environment, nor other fish or shellfish species," the company said in a statement in late September.

Northen Harvest Sea Farms says it's been in close contact with local fishermen. But two local lobster fishermen, including the owner of the boat chartered by CBC News, said they want more information about the cleanup.

"I fish herring, I fish lobster and I fish scallop. Do this settle down and pollute the bottom?" asked Snook. "We don't know, nobody is telling us nothing. And it's like you're out in the woods, you're lost.

"Is it going to affect us, should we start bailing out? Because it's times, people wants to buy the licence but it's not gonna be worth nothing."

"We don't know, it probably might even have nothing to do with the lobsters, or any other fishery," added Phillip Poole. "I think we should know, we got the right to know. We've got money invested in that. My boat there now, plus all my gear and everything, is probably about half a million dollars."