Plattsburgh dam stands in the way of salmon progress 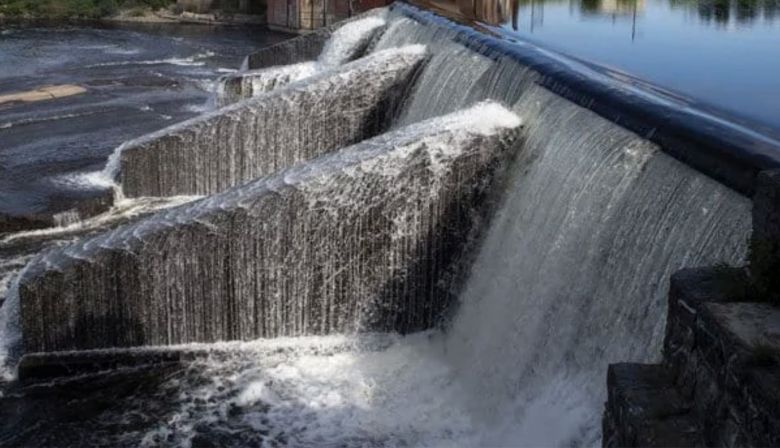 Imperial Mills Dam at Plattsburgh serves no purpose, but blocks salmon and other fish passage up the Saranac River. Photo Benjamin Chambers
Within the next five years, pretty much everyone in the North Country with an interest in fishing would like to see salmon breeding in the Saranac River for the first time in two centuries.

But the structurally unsound and long-unused Imperial Dam stands in their way. The Plattsburgh-area dam stands between salmon stocked in Lake Champlain and salmon’s ancestral breeding ground in a 13-mile stretch of the Saranac.

The dam is now stuck in a legal limbo that began more than 30 years ago.

Dams in Plattsburgh have a controversial history. The first ones, put up by the city’s founder, were supposed to be low enough for salmon to get over or to have ramps for salmon to swim up on their way to upstream breeding grounds where they could make gravel nests in riverbeds.

That didn’t happen, though. Thanks to a court ruling in 1819 — yes, 201 years ago — dams on the river were allowed to block salmon, despite a state law to the contrary. Wild Atlantic salmon were last seen in the river some five years later.

By the mid-1800s, all the wild salmon in Lake Champlain were gone too. It would take generations of regret and years of experimental breeding by the government to return stocked salmon to the lake in the 1970s.

Now, some of the Saranac River’s best fishing sits at the foot of Imperial Dam, where hatchery-bred salmon congregate. But the salmon there are stuck, just shy of where they might breed.

“The damn fish can’t get there up over Imperial Dam,” said Don Lee, one of the founders of the local chapter of Trout Unlimited.

So, while hatchery salmon of Lake Champlain provide a rush for anglers, those fish stand little chance of doing much beyond being caught or dying childless in the lake — unless something is done to breach the dam or allow fish to pass over it.

In 1987, energy regulators made a major decision that seemed like it would settle the matter.

The commission said the owner could only use the dam to generate power if the dam also had a fish ladder on it to allow salmon to pass through.

Instead of upgrading the dam, the hydroelectric turbines went idle. Now the dam just sits and is considered “unsound” and “unsafe,” according to state dam safety records.

The dam has also changed hands in the complicated ways that old commercial property often does. Now it’s owned by California-based Main Mill Street Investments and, oddly, the state of New York’s Department of Environmental Conservation.

The DEC became part owner of the dam after New York voters approved Gov. George Pataki’s 1996 bond to pay for environmental projects. One of the projects they were sold was a fish ladder on the Imperial Dam.

In 2012, it seemed as if a plan for a fish ladder was imminent, so likely and so inevitable that the DEC wrote a letter to the owner of the Kent Falls Dam, which is farther upstream from Imperial and where salmon are believed to have bred in the old days. DEC said when salmon returned to the Saranac — possibly that very year — the owners of Kent Falls had better be ready to release more water so the salmon would have enough to swim and breed.

Another dam on the Saranac is also ready for salmon. Treadwell Mills has installed a fish ladder that sits idly awaiting the return of salmon.

But the Imperial Dam still isn’t. The state hasn’t had luck getting things done there, even though it has wanted to get fish past the dam as much as anyone because of the benefits for the Saranac and for Lake Champlain.

“By doing that we’ll be bringing the lake back into a better balance,” Robert Fiorentino, a state fisheries manager, told a group of Clinton County lawmakers this summer.

Several of his predecessors have tried and failed to get salmon into the Saranac. Though Fiorentino hopes to succeed where they have failed, the past failures have come in unexpected and somewhat stupefying ways.

At one point, DEC butted heads with federal water regulators in ways that are both comic and tragic. State officials wanted to lower the whole dam to make it easier for salmon to get by, but to do that the state would have needed to dredge part of the river to remove sediment that builds up behind any dam.

Ironically, returning the river to something closer to its natural state triggered regulatory worries from the U.S. Army Corps of Engineers, which is tasked with protecting the nation’s wetlands, including the artificial wetlands created by dams

The state spent $1 million on consultant fees trying to figure out how to make the project happen, then went back to the drawing board to come up with a plan it rolled out this summer.

DEC’s new $6 million plan maintains the elevation of the dam’s spillway and includes very little sediment removal, which officials there hope will make the project easier to do.

But now officials are running into criticism that they’re helping to subsidize the other owner of the dam, Main Mill Street. The company is working with another developer that is hoping to generate power there again, but the power developer admits that won’t be profitable unless the state helps pay for a fish ladder.

The DEC, which is owner or part owner of at least two other unsafe dams, said as part owner of the Imperial Dam it is responsible for ensuring the dam’s safety. The department wants to make it safer and install the fish ladder, once and for all.

Trout Unlimited is among the environmental groups that question what DEC is doing there. They’d rather see the whole dam removed now.

The state says that would cost $30 million — five times as much as fixing it.