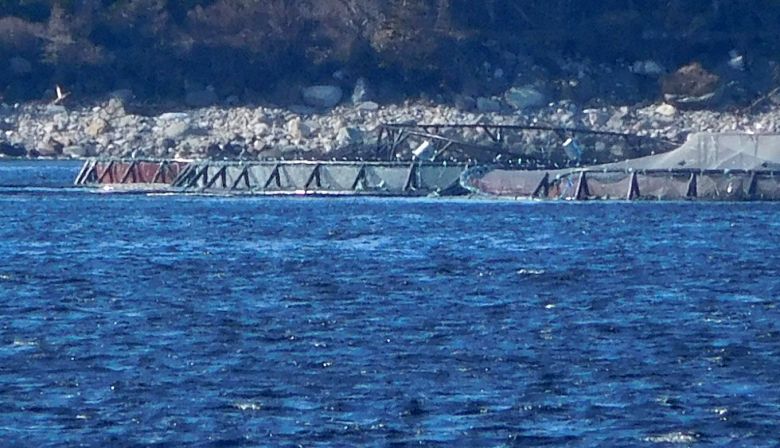 At McNutt Island site, near Sheburne, N.S., a winter storm resulted in the release of wild Atlantic salmon in 2017. Photo Ron Neufeld
It has become clear that the McNeil government, which supports aquaculture expansion in Nova Scotia, is using its creation of the Aquaculture Review Board (ARB) and new licensing process to try and deflect the strong public opposition to Cermaq’s plans to create 15 to 20 new open-net pen aquaculture sites in the province.

The government-appointed board is composed of a lawyer, an aquaculture engineering consultant and a businessman who is also a fly fishing enthusiast. No environmentalist, no commercial fisher, no local community representative. The ARB will have final authority to decide new aquaculture licences.

Many citizens have written to Premier Stephen McNeil and Fisheries & Aquaculture Minister Keith Colwell about their concerns over Cermaq’s expansion plan. Colwell has replied to many with the same response … “The file you referenced is currently in the proponent scoping phase. During this stage of the process, the company is responsible for collecting information from the community and stakeholders to help inform any potential site application. Therefore, your comments should be directed to the proponent for consideration.”

At one such “scoping” meeting in Blandford, attended by hundreds with standing room only, attendees were asked for a show of hands; “Who wants Cermaq to operate here?” No hands were raised; there was unequivocally zero support.

According to the process created by the McNeil government, Cermaq will summarize, in their opinion, the views submitted by citizens through correspondence and at the public “scoping” meetings and include those views in their application to the ARB. But is Cermaq a credible judge of residents’ feedback? The day after the Blandford meeting, Cermaq, on their website, characterized the feedback in our area as “a mix of support and vocal opposition.”

When Cermaq decides precisely where they want to establish fish farms, the process stipulates that the public will then have the opportunity to submit their views to the ARB in writing or at a public hearing. Citizens can apply to be an “intervenor” at the hearing but only those persons “substantially and directly affected” by the proposed fish farm in their area will be accepted. They don’t define those terms. Aren’t we all “substantially and directly affected” by industrial-scale aquaculture operations in the waters off our communities?

Colwell describes this process as “a more open and transparent aquaculture license and lease application process that provides opportunity for public participation.” What the McNeil government has done is try to remove themselves, our elected representatives, from the aquaculture licensing process to limit political liability on a contentious issue.

Unelected boards should never have the final say on major development decisions such as this. They can recommend, but it is our elected representatives who should make those decisions and be accountable for them. It is through our elected representatives that citizens should be able to voice their concerns, not through a flawed “scoping” and hearing process. In a democracy, the door to government should never be shut to citizens, as Keith Colwell’s is now.

Despite their attempts to deflect responsibility on this issue, citizens will hold the McNeil government accountable for decisions on aquaculture expansion in Nova Scotia.