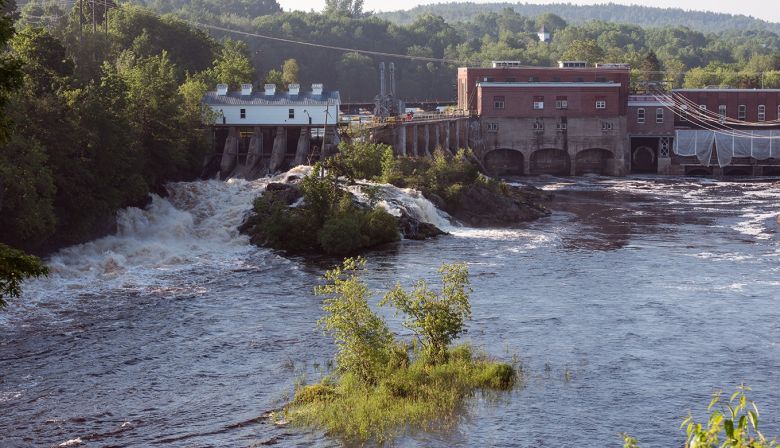 NB Power is planning to decommission the Milltown Dam. Tom Moffatt/ASF
A new poll commissioned by two conservation groups suggest a large majority of people living in the St. Stephen area support a plan to remove the Milltown Dam on the St. Croix River, the oldest structure of its kind in Canada.

But the town’s mayor, who is not convinced decommissioning is the best option, argues the poll asks a leading question.

A year ago, NB Power floated the idea of removing the hulking concrete dam and hydroelectric station that straddles the waterway between Canada and the United States, saying it generates a small amount of the province’s electrical needs and is too costly to repair.

Some vocal local opposition – notably from St. Stephen Mayor Allan MacEachern – convinced the Atlantic Salmon Federation and the Conservation Council of New Brunswick that it should gauge public opinion.

“Often, you tend to hear from people who may be opposed to a certain initiative, and we were curious what the so-called silent majority thought of the project,” says Neville Crabbe, a federation spokesman. “When the results came in, our organizations were pleasantly surprised.”

The first was whether respondents were aware of NB Power’s plan to remove the dam, to which nine out of 10 respondents said yes.

The second asked whether they support or oppose the dam’s removal given that it limits fish passage, provides less than one per cent of the province’s power needs, and “New Brunswick Power has determined that extending the life of the station is not financially feasible.” To this lengthy question, 87 per cent of respondents said they support the planned removal.

“The question is misleading,” the mayor said in an interview. “The poll is one-sided and I would have answered yes to the question as well because they’re leading people to believe the removal of the Milltown Dam is going to help fish passage and only remove some power. But it isn’t the case at all.”

MacEachern says he worries the destruction of the dam will take away four jobs and what he calls green energy from the electrical grid. It still produces about three megawatts of electricity, enough to power close to 2,000 homes.

He also says with other dams upriver, the removal of the first barrier won’t really help fish reaching their spawning grounds.

Despite the poll’s findings, the conservation groups are still worried NB Power could renege on its plans and refurbish the dam, first built in 1881.

The public utility has said little about the project since issuing a press release last year. But it told the Daily Gleaner Friday it was still committed to decommissioning the dam.

The conservation groups want the barrier removed because they say it prevents migratory fish such as endangered wild Atlantic salmon, American eel and gaspereau from going up the St. Croix River.

Vocal opponents in Fredericton have also decried work the federation is doing to removed a large, century-old dam on Campbell Creek, which flows into the Nashwaak River, arguing that the structure is an important piece of industrial heritage and a tourist attraction.

Officials in Fredericton have said the Campbell Creek Dam, like the Milltown structure, has limited benefits and is too costly to maintain.

“We hope the utility and province take notice that there’s a broad support for river restoration, including the removal of the Milltown Dam,” Crabbe said. “Taking it out is a big part of the restoration of that river.”

The federation, which over the decades has also undertaken several projects in neighbouring Maine to remove dams to improve fish passage, has encountered opposition before.

Crabbe said to convince people of the benefits, it often plans parks beside the old sites or historic plaques with photos that showcase the industries that once used the dams.

In 2018, it went so far as helping a local fire department draw water from a restored river once the Coopers Mill Dam near Augusta was demolished.

“The concern about heritage comes up with every project. These structures are decades if not hundreds of years old in many cases. People have grown up with them, and they remember swimming in the impoundments and playing around the dam. They are features of communities that people become attached to. Those concerns about heritage and history are widespread and that’s why when we undertake the projects it’s important to honour it in some way.

But Crabbe added that the old dams, many of them decrepit, had outlived their usefulness.

“They have major impacts on the upstream and downstream ecosystem and removal is a way of addressing those harms.”

The decommissioning of the Milltown Dam is complicated by the fact that it stretches across both sides of the river, and touches the soil of two nations, Canada and the United States. The removal will require permitting from governments on both sides.

Its removal would restore the free flow of water to about 15 kilometres of the lower St. Croix River, known traditionally as the Skutik.

The Peskotomuhkati Nation, led by Indigenous Chief Hugh Akagi, has been working to restore the river’s habitat and supports the removal of the biggest of the dams along the river.

The telephone poll, conducted by the firm Oraclepoll Research Ltd. On behalf of the conservation groups in early July, surveyed 300 people in the provincial riding of St. Croix, which includes the communities of St. Stephen, St. Andrews, McAdam and Campobello Island. The statistical error rate is considered plus or minus 5.6 per cent, 19 times out of 20.

The full poll results can be seen by visiting asf.ca.