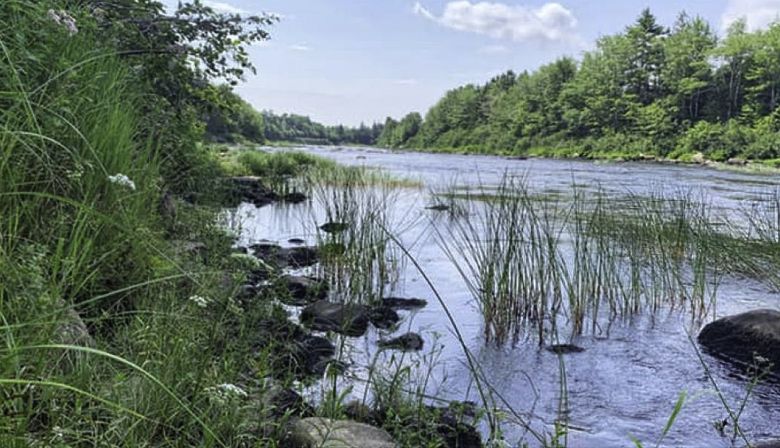 The St. Mary's River flows through rural northeast Nova Scotia. Local residents largely work in agriculture, the fishery, forestry and tourism. The river's ecosystem supports a rich diversity of life, including around 20 species of fish, notably alewife, shad, smelt, and of course Atlantic salmon. The St. Mary's River Association participates in looking after the river's fisheries, and has a heavy involvement in habitat restoration and the protection and stewardship of land.

As a species, Atlantic salmon are not doing well. At the most southerly end of their range down in the United States, salmon are close to extinct, and even in the southern uplands of Nova Scotia, which includes the St. Mary's River, they are designated as "endangered."

In the last 10 or 15 years, the St. Mary's River Association, in partnership with other organizations, has played a leading role in restoring salmon habitat on the St. Mary's River. Though they remain very much under threat in the St. Mary's, it is one of only two watersheds in the region that continue to provide a significant level of refuge for the species, which today's guests hope is laying the groundwork for a broader recovery in the future. And it is important to note that salmon are not just important in their own right, but rather their welfare is something of an indicator for the general health of the ecosystems that support them.

In late summer 2018, the St. Mary's River Association became aware of a new threat to the river. A company called Atlantic Gold -- it has since been bought by an Australian company called St. Barbara -- wants to develop a gold mine right next to the St. Mary's. This would be a massive open pit mine, and the site would also include a large impoundment facility for toxic tailings from the mining process.

Not surprisingly, the association has grave concerns. There are many potential negative impacts from the mine, but central among them, given the mine's location, is the threat of toxic contamination of the river by the mining process itself and by leeching or leaks from the tailings pond.

Though Atlantic Gold insists that the mine will be a major boost to the local economy, a study commissioned by the municipal government questions that conclusion. The mine is expected to be in production for only six to 10 years with relatively few jobs for locals and quite modest financial benefits for the area. On the other hand, any contamination could do major long-term damage to the ecosystem and could seriously harm the tourism industry. And the tailings pond would sit next to the river and present a major threat of contamination essentially forever.

The NOPE campaign aims to stop the mine, get more land in the watershed officially protected, and make changes in how the mining industry works in the province. They have done public education, through presentations and town-hall meetings. They developed an online presence. They put together the Friends of the St. Mary's, a sort of coalition of allies. They have lobbied politicians. They have a successful petition, and have done a sign and sticker campaign.

In all of these ways, they have built considerable support among opposition parties in the province. And while the provincial government says this was in the works long before the mine was proposed, the province is currently in the process of designating more land along the river as protected, and the sites being considered include some of the land that the company wants to put the mine on.

A key intermediate goal for NOPE was to ensure the mine would undergo a federal environmental assessment. In part thanks to their letter writing campaign, that assessment is currently underway.