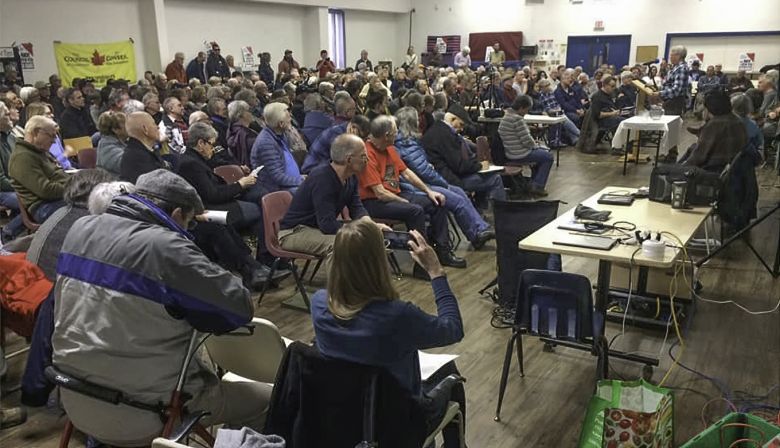 The coalition says the fish farms could host parasites and viruses which could spread to wild salmon populations.

“We want to get as much information into the hands of people who support us and who are knowledgeable, and want to be more knowledgeable,” Chris Heide, a member of the Twin Bays Coalition and Council of Canadians, told Global News.

Cermaq claims the farms could create more than 300 jobs and suggests the farms would contribute $500 million to the local economy.

Last year, the provincial government granted Cermaq exclusive options to allow the company to investigate whether the bays near Halifax are suitable for salmon farming.

The Twin Bays Coalition, under the Healthy Bays Network umbrella, was established in part to unite coastal Nova Scotia communities in opposition of the open-pen fish farms.

Sunday’s rally saw three environmentalists from British Columbia speak to their struggles with open-pen fish farms along the West Coast, with hopes of establishing country-wide opposition against them. It also heard from three different lobster fishermen, the mayor of Mahone Bay, as well as others.

Halifax Needham NDP MLA Lisa Roberts was also in attendance. She called for rural-based Nova Scotians to continue to make their voices heard at events such as these.

“I have no doubt that you will be heard at Province House, absolutely,” Roberts said, while also highlighting the importance of municipalities’ roles in voicing opposition.

Bernadette Jordan, the member of parliament for South Shore-St. Margaret’s and minister of Fisheries, Oceans and the Canadian Coast Guard, was not in attendance. Heide says they sent her an invitation, but Jordan opted to not attend or send a representative.

Fisheries and Aquaculture Minister Keith Colwell was also not in attendance, but has previously touted outmigration as an employment opportunity for rural communities.

Denise Peterson-Rafuse, the former MLA for Chester-St. Margaret’s, said Sunday that she believes provincial politicians are falling for the short-term economic benefits of outmigration.

She also echoed Roberts’ plea on the importance of speaking up.

“No matter who you support politically, please talk to your MLAs, talk to other MLAs in the province … if you’re not supporting this,” she said, noting that the provincial NDP would not support open pens.

The organization says another rally will be held in Liverpool, N.S., on Monday, while a similar one happened in Digby the day before.