Reconstruction of dam in Saco will improve fish passage

Aug 2, 2019
The new 'nature like fishway' will replace an ineffective lock system and will resemble river rapids. 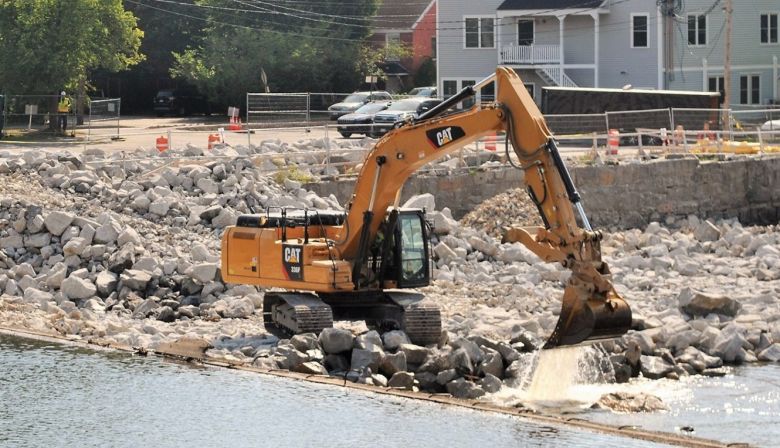 Spring Dam, Saco, ME. Photo Liz Gotthelf/Journal Tribune
SACO — Construction is currently underway on a reconstruction project of Springs Dam in Saco to allow more efficient passageway for fish on the Saco River.

Springs Dam is located near Elm Street, just upstream of Cataract Dam. The dam has an existing fish lock system, which traps fish then transports them beyond the dam using an elevator-like apparatus. The system was found to be an ineffective means to allow passage of American shad, according to a Saco Planning Board memo from then-interim City Planner Bob Hamblen in May.

A project to reconstruct the dam and create a “nature like fishway” was brought forth by the owner of the dam, Brookfield Renewable Energy, and is required by a 2007 order from the Federal Energy Regulatory Commission. The fishway is designed to meet the commission’s upstream fish passage requirements, according to a written summary of the project by Kelly Maloney, Northeast compliance manager with Brookfield Renewable.

Work began in June and construction in the river began earlier this month. The project is expected to be finished by Oct. 31. When completed, the new dam will allow the upstream and downstream movement of salmon, American shad, herring and other species in the Saco River, according to a written summary of the project by Maloney.

The project includes demolition of concrete and removal of the upper dam crest, construction of a new concrete abutment and new rock training wall, and placement of about 5,521 cubic yards of fill material, Maloney said. The project has received necessary approvals and permits from local, state and federal agencies.

When completed, the project will have a mildly sloping rock arch that simulates a natural river incline and pool habitat conditions, Maloney said.

“When finished, this fish passageway will look like river rapids, creating a gentle gradient to limit impediments for fish swimming in the Saco River,” said Saco city officials in a recent social media post.

Officials from Brookfield Renewable will be lowering the water level by 36 inches during construction beginning Aug. 1.