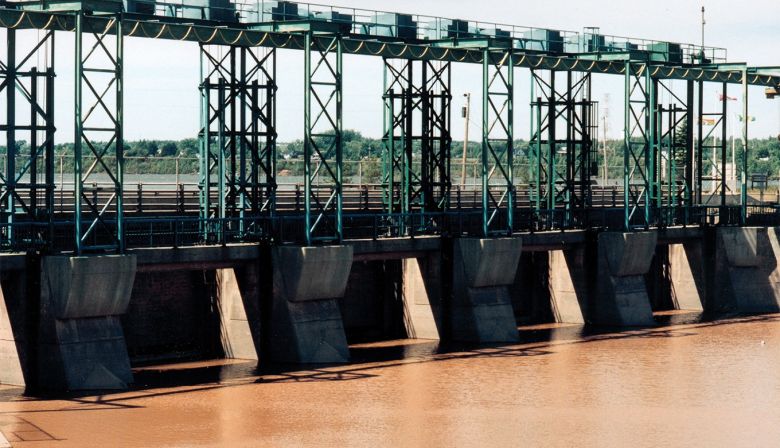 The Petitcodiac gates have been a barrier to Atlantic salmon migration for more than 40 years. The final removal will be a welcome step in restoring this river that at one time had the fourth largest Atlantic salmon run in New Brunswick - about 40,000 salmon each year in the 19th century and into the early 20th century. Tom Moffatt/ASF
The rusting steel gates that blocked the flow of the Petitcodiac River for more than 40 years will be removed in the summer of 2021, as the river is widened to 180 metres from 60 metres, the engineer watching over the $61-million project said Thursday.

"The river will triple in size, and this will have a nice, gradual flow during the tidal cycles on both sides of the bridge," said Mike Pauley, manager of special projects for the Department of Transportation and Infrastructure.

The green gate structure, installed as the most economical way to restrict the flow of water to create a river crossing, has been in place since the late 1960s at the Riverview side of the causeway. Huge steel plates hung in place by chains that could be lifted by electric winches acted like a faucet to shut off the flow of the river, also creating what was known as "Lake Petitcodiac."

Even though the gates are now opened, the rush of water at high tide squeezes through the openings "like when you put your thumb over the end of a garden hose," Pauley said.

The gates were opened in 2010 as part of a river restoration project that includes construction of a new 240-metre bridge over a channel that will be widened to three times the size it is today. The total cost of the project is $61.6 million, with $34.6 million from the provincial government and $27 from the federal government. It was announced in 2016 by former Liberal Premier Brian Gallant. Construction began in 2018 and was scheduled for completion in 2020. But current Transportation Minister Bill Oliver said earlier this month that under an "adjusted timeline" the target completion date has now been extended by a year due to "more responsible spending."

Pauley said construction will continue this summer, with the biggest part of the project delayed by one year to the summer of 2021.

The work so far

Pauley said the first step was preparing the groundwork for the new bridge, which included creating a huge mound of compacted soil and gravel. After that, the concrete piles were set into place. Last winter, huge steel beams were laid across the concrete piles and the bridge began to take shape. Workers are now on site to make final adjustments, like tightening the bolts that hold the beams in place, and touching up scratches in the paint to prevent rust.

The next step in the work, which will continue this year, is to lay an eight-inch thick concrete deck on top of the steel beams for the road bed. It will not be covered in asphalt. The road will be wide enough for four lanes of traffic and a three-metre-wide sidewalk for pedestrians and bicyclists. The sidewalks will include two wider lookout points similar to those on the Gunningsville Bridge, which opened in 2005. The bridge will be linked to the trail system to form a loop around the river.

Pauley said tender number four, now scheduled to begin in spring 2021, is the biggest and most complicated part of the project.

During this phase, a pilot channel will be excavated under the bridge, essentially diverting the flow of the river and widening it to 180 metres from the current 61 metres.

The provincial government partnered with the Town of Riverview last year on a $1.9-million project to add lanes and upgrade the Route 114-Gunningsville Bridge/Gunningsville Boulevard intersection. These upgrades were meant to alleviate traffic congestion during the Petitcodiac bridge and channel construction.

Pauley said the road closure is necessary to complete the most complicated part of the construction. When the road is closed, the gate structure will be removed and the river will be allowed to flow through the wider channel. After that, the bridge will be matched to the existing roads on both sides so traffic can start flowing when the new structure is opened in November 2021.

He said the pilot channel will guide the flow of the river and the surging power of the Tidal Bore is expected to move the chocolate brown sediment with each cycle, essentially punching its way through to create the new channel.

"We're going to let the river do a lot of the work for us," he said.