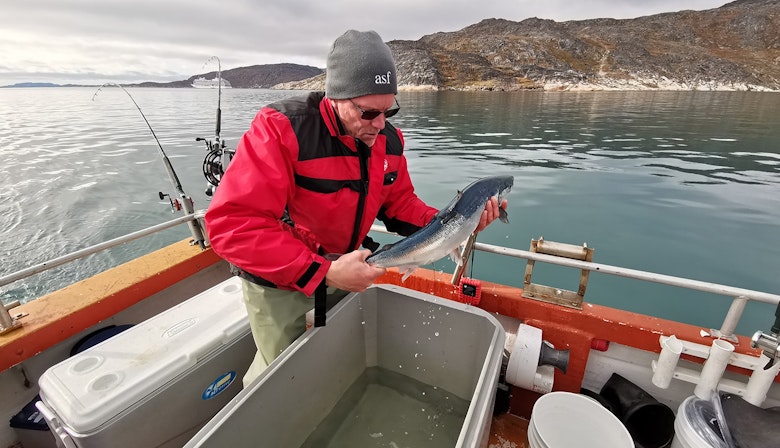 ASF's Jonathan Carr prepares a salmon for sample and satellite tagging near Qaqortoq in southwest Greenland.
For the first time, researchers have documented how many pathogens Atlantic salmon carry in eastern Canada, giving new evidence as to what could be killing them.

Taking tissue samples from 150 Atlantic salmon found in Greenland, New Brunswick and Quebec in 2016 and 2017, the scientists got a first look at the viruses, bacteria and parasites that can infect both farmed and wild salmon.

They discovered 14 infectious agents, including five not previously known to be circulating in the region's heralded fish - whose wild variety is a favourite among sport anglers and considered sacred in Indigenous communities.

The peer-reviewed findings were published last week in the journal Facets.

"I'm interested in climate change and human disturbances on the landscape and how those can interact with the natural infection profile of wild fish,"Amy Teffer, a former post-doctoral researcher at the University of British Columbia and the study's lead author, said in an interview.

"But you have to start somewhere. And then you can study what is pushing these fish over the brink of being healthy and into a diseased state."

Wild Atlantic salmon returns have plummeted in recent decades in New Brunswick, famous for its runs.

The scientists used samples from wild fish harvested at Greenland's commercial fishery, wild and hatchery-laid fish from the St. John River, aquaculture escapees on the Magaguadavic River and wild fish caught by the Listuguj First Nation on the Restigouche River between northern New Brunswick and southern Quebec.

The pathogen profile was different depending on where the fish were sampled, but with some important similarities.

Teffer said one of the more interesting findings of the team that included UBC, government, Atlantic Salmon Federation and Listuguj scientists was the presence of piscine orthoreovirus, better known as PRV.

One strain of the virus was detected in two wild Atlantic salmon sampled off Greenland, and another in aquaculture escapees near St. George. Much like the novel coronavirus that spreads easily in the human world because many carriers show few symptoms, PRV can linger for six to eight months before killing fish. It is much more prevalent among farmed salmon, although it poses zero risk for people who eat the diseased fish.

The new examination of pathogens was made possible thanks to the groundbreaking work of Kristina Miller, a federal biologist at the Pacific Biological Station in Nanaimo, B.C., another of the study's authors. Miller's laboratory had earlier developed a panel of 44 infectious agents believed to cause disease in salmon worldwide, establishing a base for comparison.

In an interview with the Daily Gleaner, she said the latest research built on similar studies done in her home province, where wild salmon populations are also under stress.

"This tells what kind of diseases could be occurring in these eastern fish," she said. "We often don't know why because wild fish simply die at sea."

She said it was very easy to tell which fish had been aquaculture escapees because their pathogen profile was very similar to what's found in Atlantic salmon that's farmed in pens off the B.C. coast. PRV is also found in Norway, and the researchers believe a pathway for disease could be the feeding grounds off Greenland, where wild salmon from Europe and North America mingle and fatten up over the winter.

Researchers have long suspected that some diseases now killing wild Pacific salmon originated from eastern North America because that's where the fish farm industry got their eggs to raise Atlantic salmon in Washington state and British Columbia.