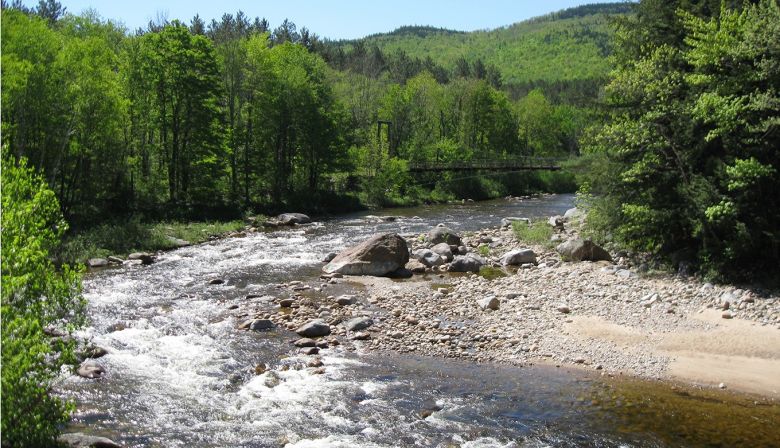 Androscoggin River in western Maine. Photo Ken Gallagher/Wikipedia
Next year will mark the 50th anniversary of the Clean Water Act, the principal federal law governing water quality and pollution in the nation's lakes, rivers and streams.

Maine Sen. Edmund Muskie championed its passage in 1972, motivated in part by the degraded condition of the Androscoggin River. The river's health has improved since then, but not without repeated legal battles. And a new effort to reclassify its southernmost section is also meeting strong resistance.

The Androscoggin, which powered factories and flowed past paper mills and farms, was once designated as one of the ten "dirtiest" rivers in the country. It was so polluted that toxic fumes could peel the paint off houses, and it was possible to bounce quarters off its rafts of foam.

Decades later, residents of Lewiston and Auburn no longer hold their noses in its presence. Through investments in storm water treatment and technological upgrades at paper mills, the health of the river has improved.

"Now people are realizing that the recreation and the aesthetics of living on the river are now much, much better," says Peter Rubins, chair of the Grow L-A River Working Group.

His group is supporting an effort in the Maine legislature to upgrade the classification of the lower Androscoggin from a Class C, to a Class B. Only A and AA are higher in the four-tiered system.

Supporters, including the cities of Lewiston, Auburn and Brunswick, Bates College, the LA Metropolitan Chamber of Commerce, Trout Unlimited and the Friends of Merrymeeting Bay, are among those who say the reclassification is not only overdue but would bolster the working river's reputation as a place to recreate and enjoy.

And, says Steve Heinz of Trout Unlimited, it would foster ongoing efforts to protect native fish.

"Of special note is that the lower Androscoggin is designated critical, Atlantic salmon habitat. It is completely incongruous that waters of this importance should carry Maine's lowest water classification, particularly since 50 years have passed since it served as the motivation for Senator Ed Muskie's Clean Water Act," he says.

Speaking at a recent public hearing on a bill to upgrade the lower Androscoggin, Heinz told members of the Environment and Natural Resources Committee that higher water quality standards that accompany reclassification would help improve the ecology of the greater watershed.

But similar bills have been opposed by Department of Environmental Protection. And Brian Kavanah, director of the Bureau of Water Quality, told the committee, the DEP will take the same position once again.

"The Department does not see a clear path forward to ensure that Class B water quality standards would be attained under the conditions required by the law, therefore, an upgrade to Class B would likely cause significant, regulatory uncertainty," he says.

Kavanah says reclassification of the Androscoggin is legally and technically complicated, in part because of Gulf Island Pond where an impoundment on the river near Lewiston and Auburn, traps pollutants that come from discharges upstream.

This area remains so unhealthy that oxygen is pumped in to keep fish alive. Because water flows over the impoundment, Kavanah says getting the river to Class B standards would require lower discharge limits for three paper mills.

And opponents, including several paper companies, say it will have implications for municipalities and hydro facilities.

"This bill will not guarantee that the lower Androscoggin River will meet Class B water quality standards at all times, but it will guarantee significant costs from municipalities, industrial facilities and hydro facilities throughout the watershed," says Scott Reed, a manager for environmental and public affairs at ND Paper in Rumford.

The bill's chief sponsor, Democratic Sen. Ned Claxton of Auburn, says it was never his intent to direct the Department to reclassify a river that doesn't meet the Class B requirements. Claxton say on the 50th anniversary of the Clean Water Act, it was to recognize how far the river has come.

A work session on the bill is scheduled for Wednesday.