Reviving the Atlantic Salmon One Egg at a Time 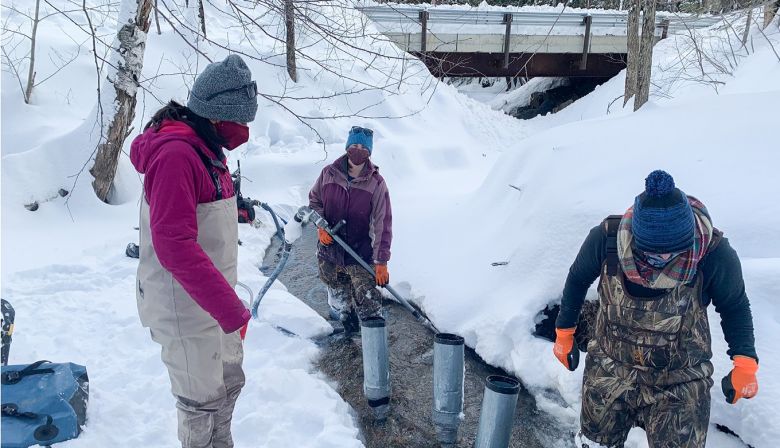 ASF's Maranda Nemeth was part of the egg injection project earlier this month in the Avon Stream valley, a tributary of the Sandy River. Photo Bill Bennett
AVON – University of Maine at Farmington students assisted The Department of Marine Resources in planting 15,000 Atlantic salmon eggs on Wednesday morning; the Sandy River in the past has always had a healthy Atlantic salmon population according to Maranda Nemeth of The Atlantic Salmon Federation.

“The species in the Sandy have really diminished over the years. Historically the salmon runs used to run in the tens of thousands, but there have been dams…and other [factors] that have caused their decline,” said Nemeth.

Dams have been the major cause of decline in the Atlantic salmon population in Maine.

“One of the big projects we have right now is tackling one of those big problems, mainly dams. So, we’re working to remove the dam in Farmington,” said Nemeth. “We’re hoping to remove that this year.”

A community conversation that started more than three years ago began to take shape last September as the Atlantic Salmon Federation broke ground on the initial stages of dam removal. Built in 1820, the dam was deemed a barrier to the endangered Atlantic salmon by the National Marine Fisheries Service in 2009. By law the town would have either needed to remove the dam completely or construct a passage for the fish to migrate through. The option of the “fish ladder” would not have included any assistance from federal or state funding, and was estimated to cost $750,000. As it stands, the dam will cost $500,000 to remove completely. The project was approved by voters in 2018.

This is the third year that Prentiss has taught the class, Natural History of the Maine Watershed. Though nervous that the trip wouldn’t be possible because of strict regulations due to COVID-19, Prentiss was able to obtain special permission.

Despite the obstacles presented by COVID-19 and the fact that the field trip was optional, eight out of 10 students (all non-science majors) still rose out of bed to stand in cold water at 10 a.m. in the morning.

The students assisted in planting cones in the gravel layer of the stream using a tool that ejects water to dig a small hole for the eggs to nestle into. This simulates the kind of hole a female salmon would dig, but in the wild they can be much larger.

“They can be up to nine feet long by three and a half or four feet wide. They’re huge depressions,” said Cassidy Bigos of the Department of Marine Resources.

Lauren Preis, a transfer student from the University of Southern Maine took part in dishing out eggs into the planted cones, but this isn’t her first time getting into the water.

“At my parents house we lived by a river, and when it was warmer outside I would go to the river everyday and watch for fish and count the frogs and stuff. I think it’s really interesting to take part in a biological process with my own hands,” said Preis.

The Salmon eggs, which are fertilized in November, won’t hatch until early summer, but they will have a higher emergence rate than wild Atlantic salmon.

“They’ll stay in the ground for a couple months and hopefully late may early June we’ll have some emergence. We got 17 percent out of the gravel before, which doesn’t like a whole lot but if you look at wild Atlantic salmon typically they’re at 10 percent emergence,” said Jennifer Noll, a research scientist from the Department of Marine Resources.

Many of the students who participated in planting cones and placing eggs felt that what they were doing was important. Political science major, Malcolm Langner felt like the work was essential.

“The major reason why North Atlantic salmon are going extinct is because of us. The least we can do is to try and help them recover,” said Langner.