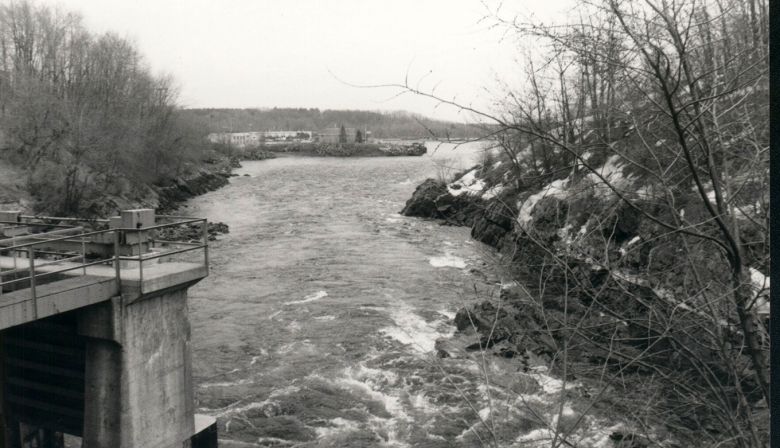 Historic view from about 1965 of the Saco River from the dam. ASF Archives
I’m pleased to be restarting my column, on a monthly basis. I cover items of community interest and always appreciate your suggestions. This month I would like to talk about salmon.

The month of May is fish migration season, and in fact, May 16 was World Fish Migration Day.

There are three significant species of fish that migrate up the Saco River in the spring. Atlantic salmon, river herring, and American shad all migrate upriver as adults to spawn in the same stream where they were born.

Many migratory fish species are critically endangered or threatened. Significant causes are man-made barriers, such as dams or sluices or power generation facilities, which disrupt the natural flow of rivers and modify or prevent their usual migratory routes. Pollution, especially prior to the Clean Air and Clean Water Acts of the 1970s, was also a significant driver that led to endangering and threatening these species. It’s important to keep our river clean.

In fact, the last significant remaining wild Atlantic salmon populations in the United States are found only in Maine. In order to address this challenge of making hydropower while allowing safe fish passage, a variety of methods to ease fish migration upstream have been developed.

Here in Biddeford-Saco, there are two ways for fish to get upstream. The Saco River splits into two channels to form Saco Island (sometimes called Factory Island). Fish that head to the right (from their perspective, heading upstream) catch an elevator ride (really!). The fish elevator at the Brookfield Power hydropower facility operates seven days a week this time of year, with staff monitoring the number of incoming fish and lifting them to the high side of the dam. This can be seen near Rapid Ray’s. Fish that head to the left navigate through a roaring falls and find a fish ladder. This can be seen from the new bridge that connects Pepperell Mill Campus to the island.

Fish are amazing. They will swim hard into the current, always looking for that way upstream. However, fish ladders are not suitable for all species of migratory fish – some cannot navigate it. So the question is, what is the best way for fish to get back to their spawning grounds, in river sections that are dammed for flood control, hydropower, or other reasons?

That’s where the Nature-Like Fishway comes in. This structure, which looks like a bunch of rocks in a gradual sloping rapid, can be seen along Elm Street/Route 1 near Deering Lumber and Koi Restaurant. It is intended to make fish passage up the Saco River easier. This Nature Like Fishway is the second one in the state of Maine. (The first one is on the Penobscot River in Howland).

The Nature-Like Fishway is pretty exciting. What you see is a bunch of big rocks in the river but it’s highly engineered. It’s deeper in the middle and shallower on the outside. In between each strip of rocks there’s a channel. This allows fish to swim hard upstream, and take a break in an eddy behind a rock or leave the main channel, before heading back into the main current again.The design is important, so that it can work for all species of migratory fish, not just Atlantic Salmon, and the project is closely monitored by state & federal environmental oversight agencies.

By the way, although it doesn’t change its effectiveness, engineers tell me they will move the trees and debris off the fishway, once flows come down in the summer.

The Fish Friends program, run by the Maine Council of the Atlantic Salmon Federation, has provided Atlantic salmon eggs and classroom activities to Maine schools, including Biddeford Middle School, for many years. Last year more than 6,400 Maine students experienced the Fish Friends program and stocked over 14,000 salmon into Maine rivers. Fish passage structures can even help monitor invasive and nonnative species and even prevent passage of some.

The Saco River has been used for hydropower for hundreds of years. The dream is to make fish passage as easy, or in fact even easier, than it was before any man-made structures changed the flow. The Nature-Like Fishway is a key step in that direction.