Salmon Are Getting Sick Too 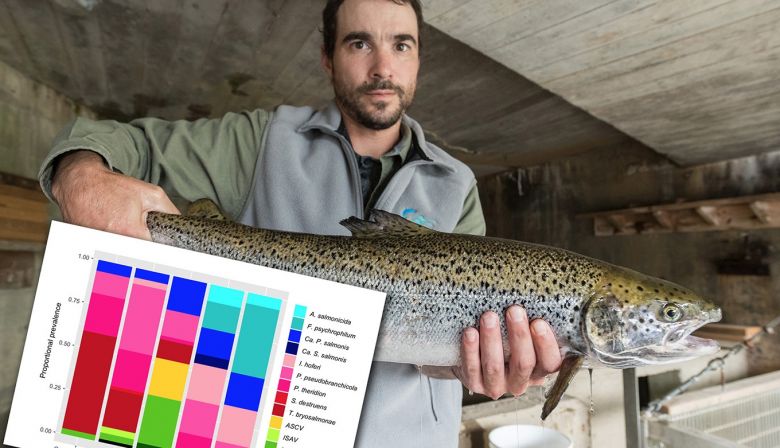 Published last Friday in the scientific journal Facets, the study was a collaboration by the Atlantic Salmon Federation, Fisheries and Oceans Canada and Indigenous fishermen.

The findings come as scientists wrestle the question of what’s killing Atlantic salmon in the open ocean.

Salmon survival at sea has fallen off a cliff since 2010 and though there are many theories, there are no solid answers as to why.

“It’s the first step,” said Kristi Miller, a Fisheries and Oceans Canada research scientist who co-authored the study, of coming to understand what is killing salmon at sea.

To Miller’s mind, viral infections are more of a symptom than a cause of stress in a species.

“When you see perturbations to environment, it could be high water temperatures, changes to water quality or the impacts of industrialization, oftentimes you see an increase in the potential for infectious diseases,” said Miller.

It’s like when life’s stresses get you run down and then you’re an easy target for the flu.

Then the flu makes things worse.

Then you get eaten by a seal.

Or rather, an Atlantic salmon falls prey to a predator in their environment.

“(On the West Coast) temperature is a major driver of most infectious agents we have looked at,” said Miller.

“It’s the same probably on the East Coast. If so, as temperatures of rivers and the ocean get warmer then disease will have a greater impact on the wild population.”

Despite its small sample size of 150 fish, the study’s co-authors were able to dig deeper into the issue of viruses, bacteria and microparasites preying on Atlantic salmon.

The fish were taken from five sites – two off Greenland, one in Quebec and two in New Brunswick.

It's long been known that salmon from eastern North American rivers mix with salmon from European rivers while feeding in the waters off Labrador and Greenland.

The study’s authors were able to show that five infectious agents plaguing the western Atlantic salmon were nearly genetically identical to ones plaguing European fish – meaning fish were infecting one another at sea in their shared feeding grounds.

They also found that Atlantic salmon that had escaped from aquaculture pens in New Brunswick carried significantly more infectious agents.

However, they didn’t find wild fish passing by aquaculture operations to have higher rates of infection than those coming from rivers without fish farms.

“This is a first big paint brush swath,” said Jon Carr, vice-president of research for the Atlantic Salmon Federation, of the study.

Next steps will include teaming up with the Ocean Tracking Network to tag salmon from which a tissue sample has been taken and release them into the environment to see what impacts different pathogens have on at sea survival.

“We want to dig deeper in terms of the overall health of fish leaving rivers,” said Carr.

“If we find they are carrying certain pathogens when they leave the river systems, well where are they picking up in the freshwater system? Can anything be done to minimize or reduce that?”