May 1, 2020
Plan would see fish poisoned in a section of Miramichi River and nearby lake to kill invasive smallmouth bass Smallmouth bass have spread into a segment of the Southwest Miramichi, and pose a major threat to the future of wild Atlantic salmon in the system. Photo ASF
New Brunswick salmon groups and First Nations are keeping an anxious eye on the calendar as COVID–19 threatens the arrival of a key U.S. expert invited here to help eradicate invasive smallmouth bass.

The bass - which are not native anywhere in Atlantic Canada - have escaped into the Miramichi River, where it is feared they could devastate native Atlantic salmon stocks by eating their young.

Brian Finlayson of California literally wrote the book on how to use rotenone, a product that kills fish within minutes. It has been effective in erasing invasive fish populations elsewhere in North America and other parts of the world.

It's poisonous to fish but bio-degrades in water over a period of two weeks to 30 days or more, depending on conditions.

The salmon groups are still hoping they will be able to apply rotenone in late August or early September in Miramichi Lake, where the bass appeared just over a decade ago, and in a 10 kilometre stretch of the Miramichi River itself.

"COVID is throwing a big stick in the spokes here," said Nathan Wilbur of the Atlantic Salmon Federation this week. "We need Brian here to do some training and help with the planning and execution of this."

The COVID–19 emergency also led to the cancellation of Miramichi area public meetings scheduled for the month of April.

The ASF held a virtual meeting, billed as a webinar, Wednesday evening to explain plans to treat the lake, river, and a small brook that connects the two.

The groups, led by the North Shore Micmac District Council, had originally planned to treat just Miramichi Lake, but broadened it to include a section of the river after the discovery last August that some of the smallmouth bass had made their way through a brook into the river itself. 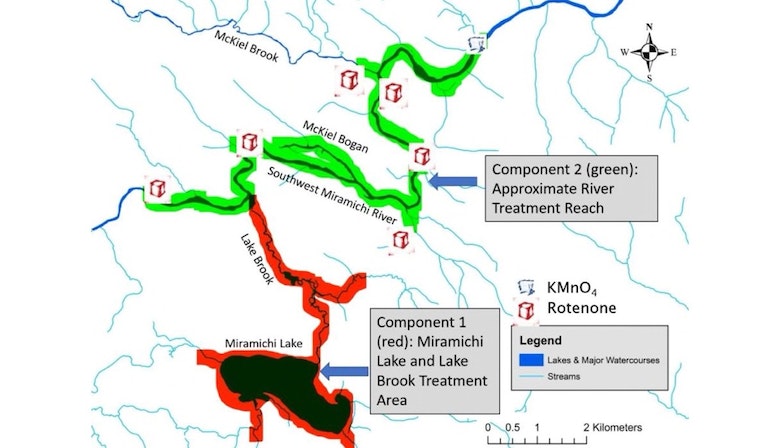 While eradication would have been simpler years ago, before the smallmouth bass spread into the mainstem of the Main Southwest Miramichi, it is still possible to do so, but there is now an urgency. Originally the smallmouth bass were illegally put in Miramichi Lake.
The treatment plan will require approval from the federal Department of Fisheries and Oceans. The application to treat the river was only added to the original request to DFO on April 8, which may make it too late to treat the river into 2021.

If the Rotenone treatment is successful all smallmouth bass in Miramichi lake would be killed within hours, along with almost every other species of fish. A proposed recovery plan would allow the lake to repopulate with some fish species making their way into it via the brook.

Other, non-migrating fish species would be transplanted to the lake. Adult invertebrates are not expected to be impacted, nor are birds and insects.

"For the most part studies show that zoo plankton and invertebrates recover to pre-treatment levels the very next spring after treatment, or at least within a year," said Wilbur.

According to Finlayson, who participated in the online webinar from his home in California, the late August, early September window for treatment will give time for migrating fish like gaspereau to leave the lake for the annual return to the sea, while also providing warmer water, increasing rotenone's effectiveness, and reducing the amount of time it takes to dissipate.

He says camp owners will be able to begin using the lake three days after completion of the treatment, with the rotenone likely dissipated entirely within 30 days.

Those statements do little to ease concerns for Trish Foster. Foster represents a group of camp owners on the 600 acre lake.

"None of our concerns have changed," said Foster.

Foster says she's worried a second, or even a third application of rotenone will be needed to eradicate the bass in the lake. She cites cases in Washington State where multiple applications were required in over 200 lakes where rotenone was used.

A 2002 EIA in Washington state says rotenone does not always kill the targeted fish, and in many other cases, the invasive fish were quickly reintroduced back into the lakes illegally. In 508 Washington lakes treated, 283 had to be treated more than once.

Foster says her group does not see anything to be gained by continuing to meet with the working group pushing for the rotenone treatment, but will continue to press the provincial government for an EIA.

The New Brunswick salmon groups are confident rotenone will work in Miramichi Lake.

But the ASF's Neville Crabbe says they are considering the possibility a second treatment could be required in the Miramichi River itself if the smallmouth are not eradicated the first time.

If so, he said, they would strive to have it done in "quick succession" rather than waiting another year.