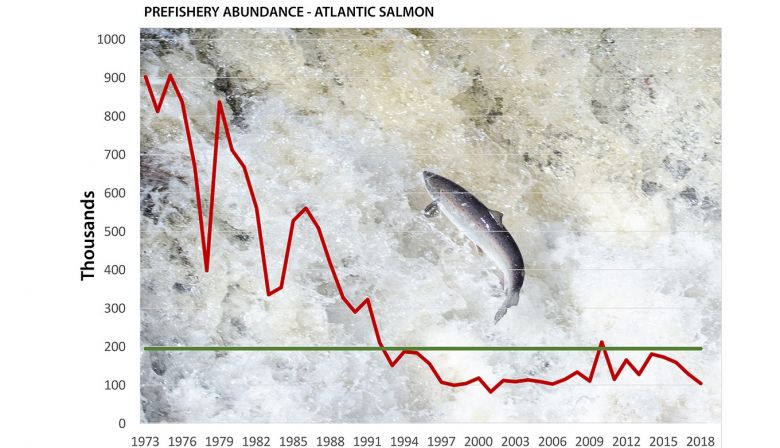 Pre-fishery Abundance graph for two-sea-winter Atlantic salmon, looking back from 2019. The year 2018 is the last year that can be determined by this method. Data from ICES, graph by ASF
Salmon returns continue their long decline.

According to the Atlantic Salmon Federation, 2019 was their third lowest rate of return to breed in 49 years of record keeping.

The group released its 2020 State of Wild Atlantic Salmon Report on Thursday.

The document gathers available data sources ranging from counting fence reports in Labrador to angler reports in Cape Breton, compares them to historical results, and comes up with regional estimates on returns.

“There is no surprise here,” said Bill Taylor, president of the Atlantic Salmon Federation.

“We’ve been on a downward trend for quite a number of years. In fact over the last 50 years we’ve seen a 75 per cent decline of adult Atlantic salmon returning to Canadian rivers.”

Thirty years after the closure of Atlantic Canada’s commercial salmon fisheries,57 years since the American Clean Air Act throttled back the tailpipe dropping acid rain on us and with very little industry along our rivers, salmon have never done worse.

Newfoundland and Labrador accounted for 87 per cent of all grilse (salmon returning after one winter at sea) to North America.

Six of that province’s 24 rivers are assessed as having healthy runs and ten are critical.

Around the Gulf ofSt.Lawrence major rivers New Brunswick rivers like the Restigouche and the Miramichi have all seen large continued decline, attributable in part to strong striped bass populations preying upon juveniles.

In Nova Scotia returns are estimated based upon angler reports,which are dicey because only 20 percent of anglers fill them out and fishing effort also factors in.

That said, Antigonish’s West River,Pictou’s East River and River Phillip all saw declines in reported catches by anglers in 2019 over 2018.

The Margaree River’s estimate of 2,515 large salmon and 584 grilse returning in 2019 were both below the long term average.

Nova Scotia’s eastern shore still hasn’t recovered from the acidrain that stripped its thin soil of the ability to lower the ph in rivers.

However, efforts by groups on the West River near Sheet Harbour and the St. Mary’s near Sherbrooke,have made for rare bright spots in the portrait of species health.

The inner Bay of Fundy salmon, meanwhile, has been largely choked out.

The culprits there include causeways placed across major rivers and a lack of fish passage.

“We are really good at charting the demise of Atlantic salmon. DFO has not been good at putting in place real recovery plans and conservation action plans. It’s not like we don’t know what has to be done.”