School's out for summer, including these salmon fry into Nagle's Hill Brook 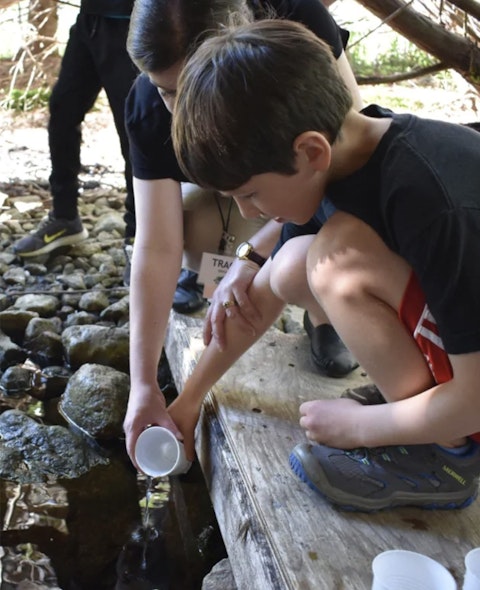 Two schools parted ways at the Fluvarium this week.

One was a Grade 4 class from St. John's, and the other was a school of salmon — which also attended Roncalli Elementary School — and is now swimming in St. John's waterways.

Over the months the class watched the eggs hatch and mature into salmon fry, before releasing them Thursday morning.

The Roncalli kids gave their salmon colourful names, like Lemon Slices and Orange Slices, Mr. Carrot and Fish Stick. There were others like Sushi, Swell, Bud and Jeffery.

Student Alma Elshahat said she was "sad, very sad" to see her fish — Mr. Wiggles — go, but she liked the experience.

"I learned that a lot of salmon come from the ocean ... they lay their eggs and they turn red because they don't eat for the long journey, which I feel is impossible," Elshahat said. "I mean, it's not impossible."

Pouring Mr. Wiggles from a white plastic cup into the Nagle's Hill Brook, Elshahat, who is from Egypt and came to Newfoundland in Grade 2, said the young salmon's journey reminds her of the pilgrimage that Muslims undertake to Mecca.

"I do have something to relate with the salmon," she said.

"We go to the Kaaba [the cube structure at the heart of Mecca]. You walk all the way there, which is kind of like the same as salmon, but [we] walk, instead of swim."

Mr. Wiggles and the other fry will travel along Nagle's Hill Brook into Long Pond, which runs into Rennie's River. From there its pilgrimage to the Atlantic Ocean begins.

One salmon, Turbo, was fittingly named because he was quick to leave his cup and get into the water.

"A fish is a fish and the word marine is associated with the water," Alexis Davis said.

"What I like about this program is ... it is helping nature," Davis added. "I like to raise animals because I love nature. I want to help nature."

"It was very fun," Adrianna Hussey said when asked about how she felt releasing her salmon. "I waited, like, months to do this."

For four years Sullivan and his students have participated in the Fluvarium's Fish Friends program.

"Once the eggs got in, they were all excited," Sullivan said.

"But then there was nothing going on for a while, and then about three weeks after we got the eggs, the first one hatched and that was very exciting for them."

The process required some patience.

"They found it hard to concentrate in class and then they all came over to watch, and watch and watch some more and then of course once one hatched, more and more would hatch," Sullivan said. "Within the next few days about 30 hatched."

Sullivan's students learned eyed eggs would hatch into alevin and feed on their yolk sacs. Once the sac disappeared, the alevin matured into a salmon fry.

This year stood out because about 90 of the 100 salmon eggs that Sullivan's class raised had survived.

"That is a great success," said Bob Piercey, senior environmental educator at the Fluvarium.

"Some schools only have 10. We had one school who lost them all, it was a result of a power outage in the school — nothing to do with what they did, it's just really bad luck."

According to Piercey, 15 schools are participating in the Fish Friends program this year.

Schools are not the only ones raising baby salmon, however.

According to Piercey, there are extra eggs raised at the Fluvarium. These eggs are adopted by children during Easter Fun Day. Those children didn't take those adopted eggs home, but the kids came back on Saturday morning and set their salmon free.

"That is not unfortunately open to the public because we wouldn't have enough," Piercey said. "This is open to the kids who visited here Easter Saturday."

Schools, individuals and governments are trying to protect salmon.

"This is the Year of the Salmon," Piercey said. "It is an international thing. Its goal is to educate people about the plight of Atlantic salmon and salmon in general around the world, because they are a species that is threatened right now, and their numbers are declining."

Sullivan's class released its fish as they were wrapping up the school year.

"We're helping animals," Elshahat said. "I hope we get to do the same kind of project in Grade 5."