Feb 25, 2021
The Atlantic meridional overturning circulation, a system of currents, is weaker than it has been in 1,000 years 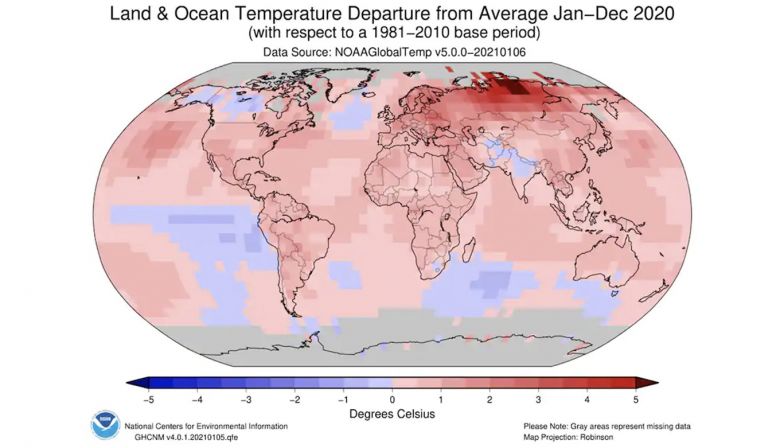 Global temperature anomalies in 2020, according to the National Oceanic and Atmospheric Administration, showing the recurrent “cold blob” south of Greenland. (NOAA)
A growing body of evidence suggests that a massive change is underway in the sensitive circulation system of the Atlantic Ocean, a group of scientists said Thursday.

The Atlantic meridional overturning circulation (AMOC), a system of currents that includes the Florida Current and the Gulf Stream, is now “in its weakest state in over a millennium,” these experts say. This has implications for everything from the climate of Europe to the rates of sea-level rise along the U.S. East Coast.

Although evidence of the system’s weakening has been published before, the new research cites 11 sources of “proxy” evidence of the circulation’s strength, including clues hidden in seafloor mud as well as patterns of ocean temperatures. The enormous flow has been directly measured only since 2004, too short a period to definitively establish a trend, which makes these indirect measures critical for understanding its behavior.

The new research applies a statistical analysis to show that those measures are in sync and that nine out of 11 show a clear trend.

Prior research had suggested that the AMOC was at its weakest point in a millennium or more, and suggested a roughly 15 percent weakening since about 1950. But when it comes to the latest evidence, “I think it just makes this conclusion considerably stronger,” said Stefan Rahmstorf, an author of the research and an oceanographer with the Potsdam Institute for Climate Impact Research in Germany.

The study was published in Nature Geoscience by scientists from the Potsdam Institute, Ireland’s Maynooth University and University College London.

The AMOC is driven by two vital components of ocean water: temperature and salt. In the North Atlantic, warm, salty water flows northward off the U.S. coastline, carrying heat from the tropics. But as it reaches the middle latitudes, it cools, and around Greenland, the cooling and the saltiness create enough density that the water begins to sink deep beneath the surface.

The water then swings back southward and travels all the way to the Southern Hemisphere, submerged, where it makes its way to the Antarctic as part of a global system of ocean currents. The entire system is known as the ocean’s thermohaline circulation (“thermo” meaning heat and “haline,” salt), and it plays many critical roles in the climate. It is also referred to as the global ocean conveyor belt, because it redistributes heat worldwide.

In the North Atlantic, most important is the transport of heat northward, which has a moderating effect on Europe’s climate in particular. But the circulation can be weakened by making northern water more fresh and less salty, and therefore less dense. That’s what climate change — through a combination of more rain and snow, more melting of Arctic sea ice, and huge freshwater pulses from Greenland — is thought to be doing.

The AMOC has captured the popular imagination because of its depiction in the lurid sci-fi film “The Day After Tomorrow,” in which various disastrous events occur after a sudden halting of the current. Nothing nearly so dire is underway, and scientists say that although a shutdown is possible in the future as climate change continues, steady weakening is the more likely course in the near future.

The late climate scientist Wallace S. Broecker wrote in 1997 that the AMOC is the “Achilles’ heel” of the climate system, citing evidence that it has switched on and off repeatedly over the course of Earth’s history, with the power to flip warming periods to intense cold in the Northern Hemisphere.

Scientists do not expect anything so severe in our future, especially because greenhouse gases will continue to cause offsetting warming. However, they note that even the modest slowing of 15 percent has been accompanied by odd temperature patterns in the ocean and the significant upending of certain key fisheries, such as lobster and cod off the coast of New England.

In particular, a recurrent “cold blob” has been observed in the ocean to the south of Greenland — a large region that is bucking the overall global warming trend and instead showing a marked cooling pattern. Scientists think this is evidence that less warm water is reaching this region than previously, and that it may also be a result of runoff from the melting ice sheet.

At the same time, warm water has lingered instead off the coast of the northeastern United States, where the Gulf of Maine is showing some of the fastest-warming ocean water anywhere in the world.

Michael Mann, a climate scientist at Penn State who co-wrote a major 2015 study with Rahmstorf showing a slowing AMOC, said the cold blob has been “remarkable” in its staying power.

Mann said that the cold blob’s presence since 2015 has helped convince him that the ocean current’s slowdown is a robust finding. “The remarkable persistence of the cold blob since the publication of our article has convinced me, ‘Yeah, it’s real.’ ”

At the same time, though, the latest study does rely on “proxy evidence,” rather than direct measurements of the circulation.

To give an example, one of the proxy-based studies, published last year, uses sediment collected from the seafloor to the south of Iceland, and the microscopic organisms it contains, to detect a shifting of water types over time. It therefore infers more warm water arriving in recent decades as opposed to colder conditions over hundreds of previous years.

The current study’s conclusions are, by necessity, only as good as the proxies are. And the complexity of different currents in the Atlantic, as well as different definitions of the AMOC, can call into question what the proxies are actually measuring, said Marilena Oltmanns, an oceanographer at the National Oceanography Center in Britain.

Still, Oltmanns noted, “I think it is commendable that the authors used so many different proxies. So, even if only one of these proxies is linked to the AMOC, it should be sufficient to justify their conclusion.”

“The proxies from different regions are measuring different aspects of a complex 3-D AMOC circulation,” he said. “To me, the key is that all these pieces of the AMOC puzzle fit together so nicely in the proxy data.”
https://www.washingtonpost.com/climate-environment/2021/02/25/atlantic-ocean-currents-weakening-amoc-gulf-stream/