Scotland's salmon crisis: 'Anglers only want one. But it's just not happening'

Apr 29, 2019
On the Tweed, Atlantic fish have all but disappeared. Changes out at sea are stopping them coming back.
Kevin Patterson was delighted when he saw the salmon suddenly jump from the Tweed. Moments later, it happened again and then once more. Such sightings have become remarkably rare. “We’ve got to the stage where we say: ‘Bloody hell, I saw a salmon,’” he said. “That’s a good-sized fish.”

Patterson has been a ghillie, a Gaelic term for attendant, on this mile-long stretch of the Tweed for nearly 30 years. He gives expert advice to his anglers, and this is one of the worst seasons in living memory. The Atlantic salmon that once crowded the water have disappeared.

It is a similar picture across Scotland’s famous salmon fishing rivers, including the Spey and the Dee. Earlier this week, official figures showed that 2018 was the worst year on record for wild salmon numbers, when just 37,000 were caught across the country.

When Patterson first took over the Tweedswood beat near Melrose, about 40 fish would be caught in the spring season. In 1995, three anglers landed 19 in one session. So far this spring, his clients have caught two.

Salmon numbers have “gone off a cliff”, he said. He now feels sorry for his clients. “They just want to come here and enjoy their fishing. Anglers aren’t expecting 10 fish. They just want one; two would be mega. But it’s just not happening.”

If one is caught, he immediately puts it on Instagram, to alert other anglers his clients have had some luck. The low numbers means ghillies must compete hard to attract clients. Times have changed.

Now the emphasis for him and his colleagues on the Tweed is not on numbers of salmon, but a nice day out for the clients. His wood-lined cabin, tucked under the steep, wood-lined banks of the Tweed valley a few hundred metres from Trimontium, the largest Roman army camp remains in Scotland, overlooks the placid, slow-running waters. A heron flaps lazily along the opposite bank before landing to fix its eyes on the river. A brown trout breaks the surface.

Patterson said before anglers were banned under a voluntary code from killing their catch to conserve numbers, spring salmon, the youngsters returning for the first time to their home river, were the most prized. Rich in omega 3 fish oil, they have a bright red flesh and a fine flavour.

“These are the best fish you can eat, a wild Scottish salmon – and what price can you put on it, because you’re not allowed to kill one. They are the Rolls-Royce of salmon. You don’t get anything better than what’s in there,” he said.

The Tweed had its highest catch in recent history in 2010, when 23,000 were caught. Patterson describes that as a freak year but, on average, 10,000 to 15,000 are caught every year. Since 2014, those numbers have halved. Last year, 5,510 were caught. The collapse in salmon numbers means fewer anglers are turning up. So the prices charged for a day’s fishing have been slashed up and down the Tweed.

Patterson charges as little as £40; he once charged £140 at this time of year. The most sought-after sites have cut prices by 50% down to a few hundred pounds a day. Local hotels are struggling; many beats are losing money.

That economic impact is deeply worrying, said Fay Hieatt, the clerk to the River Tweed Commission, an august body set up by act of parliament in 1807 to police and conserve salmon stocks on the river and its tributaries, which straddle southern Scotland and Northumberland.

In 2015, an economic impact study calculated that angling brought £24m into the Tweed region’s economy, supporting the equivalent of 520 jobs. That spending has fallen by between 50% and 60% since then, Heiatt said.

The Tweed commissioners suspect natural weather and sea temperature patterns at global level are having an impact. Their records over the last 200 years show there is a 60-year cycle in salmon stocks rising and falling, linked to a meteorological phenomenon known as the North Atlantic oscillation, which affects the climate across the region.

That affects food supplies for salmon out at sea, increasing competition for food with species such as mackerel, and altering water temperatures. Climate change, which is warming the sea and harming marine life, is making those pressures much more significant.

Their extensive monitoring of salmon breeding suggests there has been no fall in the number of juvenile salmon leaving the Tweed. It is just that very few make it back, perhaps only 1%. “Most of the problems we’ve got are out at sea,” Heiatt said.

He said salmon numbers across northern Europe were plunging: the rest of the UK, Ireland and Norway were affected too. But in Scotland there seems to be a lack of coherent action by government agencies, none of which have over-arching responsibility for Atlantic salmon. Protecting their stocks needs to be a national priority, Wells said. “The driver has to be about conserving a species absolutely iconic to Scotland.” 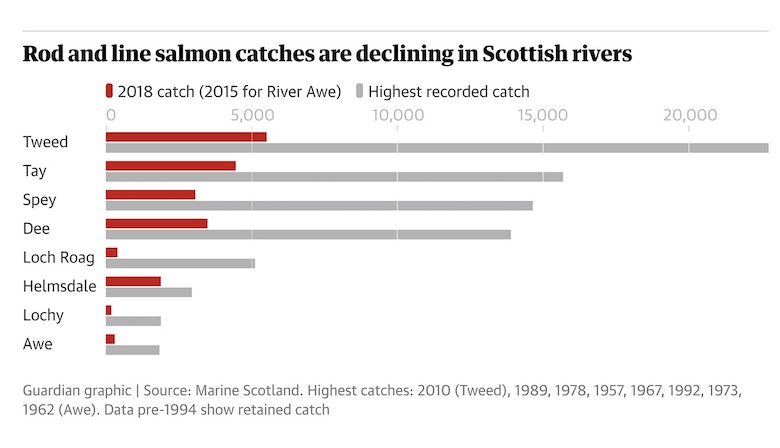