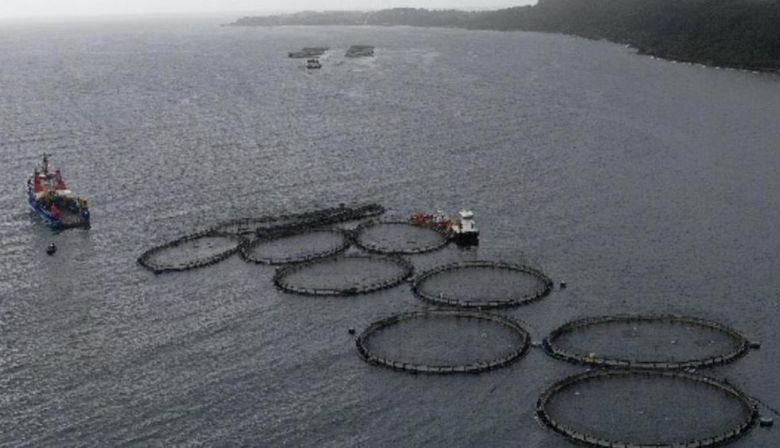 Three of the ten pens at a fish farm in Carradale have been damaged by Storm Ellen. Photo CORIN SMITH, Inside Scottish Salmon Feedlots
There is growing concern that 50,000 farmed salmon, which escaped from cages in the Kilbrannan Sound after it was hit last week by Storm Ellen, could find their way into local rivers.

Fisheries Management Scotland, the representative body for Scotland’s District Salmon Fishery Boards and Fisheries Trusts, said they anticipated that a ‘significant numbers of adult’ salmon may have escaped.

The incident happened when the 10 cages at the Mowi owned salmon farm at North Carradale shifted position after its seabed anchors became dislodged during Storm Ellen which hit the UK and Ireland.

Four of the nets were damaged – two with sizeable holes and on the basis the farm held 550,000 9lb salmon it is estimated that tens of thousands of fish are at large. Mowi confirmed that a total of 48,834 salmon escaped, 30,616 died and a further 125,000 were harvested.

In recent years escaped farm fish have not always entered the rivers as soon as they escape. If they do so it is very difficult to remove them, particularly at a time when it would be hoped wild salmon is are entering the rivers.

Anglers on Arran and across Ayrshire have been warned to report any obviously farmed salmon they find to Marine Scotland. The farmed fish are identifiable because of deformed or shortened features such as their fins, gill covers and snouts. Their pigmentation can be heavier with more spots than are usual on wild salmon.

The farmed fish can have a devastating impact on the wild population and the escape has caused frustration among anglers.

The farm contains around half a million fish but owners Mowi said the pens have been temporarily secured after their seabed anchors became dislodged. The firm said it informed Marine Scotland of the potential for some fish to escape ‘immediately’.

The managing director of Mowi has been in touch with Fishery Management Scotland (FMS) and has offered any assistance.

Dr Alan Wells, chief executive of FMS, said: ‘This is clearly a very concerning event, and we need to understand the circumstances which led to the integrity of the farm being compromised to this extent during weather conditions not unknown in the Firth of Clyde.

‘In Norway, interbreeding between wild and escaped farmed fish is considered the greatest threat to wild Atlantic salmon and it is important that all avenues are explored to mitigate impacts on wild salmon arising from this event. We will be working with Mowi Scotland and Marine Scotland to ensure that this occurs. In the longer-term we must learn the lessons required to ensure that it is not repeated in future.’

‘Fisheries Management Scotland have contacted the relevant District Salmon Fishery Boards and Fisheries Trusts to alert them to this situation and to remain vigilant to reports of capture of these fish. It is important that anglers remain alert to any farmed fish entering our rivers. Any farmed fish caught by anglers should be humanely despatched and reported to the Fish Health Inspectorate.’