Oct 13, 2020
One of the most comprehensive studies of wild Atlantic salmon genetics, which aims to gauge the impact of any interbreeding between wild and escaped farm-raised salmon, has been launched today. 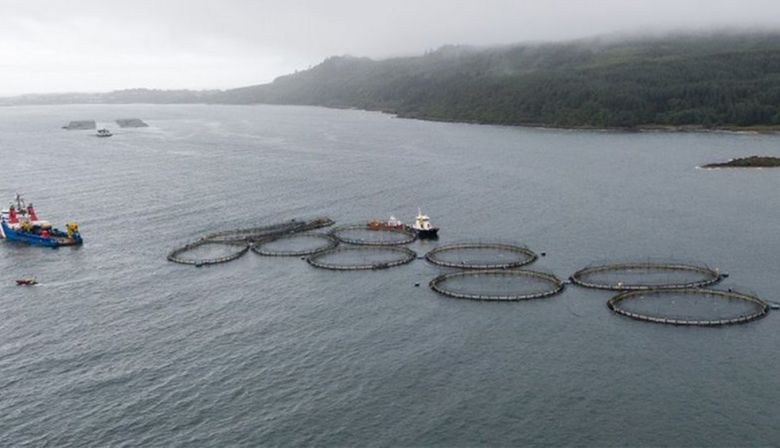 Four salmon net-pens damaged in Scottish site at North Carradale, on the western coast. The escape is resulting in a massive study of escapee genetics in Scotland.
The study has been launched in response to a recent escape of farm-raised salmon and will be managed by the wild-fish conservation body Fisheries Management Scotland, supported by scientists from Marine Scotland Science, and funded by Mowi Scotland.

The multi-year study of 115 sites aims to confirm wild salmon’s current genetic profile and to track for the potential of genetic changes should interbreeding of farmed and wild salmon occur.

In late August, Mowi Scotland confirmed that 48,834 farm-raised salmon escaped from its Carradale farm in the Firth of Clyde after it became detached from its seabed anchors during a combination of strong weather events.

Since the escape, Fisheries Management Scotland has been working with member District Salmon Fishery Boards and Fisheries Trusts, as well as angling associations, to monitor the situation and mitigate where possible. Escaped farmed salmon have been caught by anglers in multiple rivers across Loch Lomond, Ayrshire, Clyde, Argyll and in rivers in north-west England.

The priority for Fisheries Management Scotland and their members has been to ensure that any farmed fish are removed from the rivers, humanely dispatched, and scale samples submitted to enable accurate identification, and Mowi has committed to support these actions.

Dr Alan Wells, chief executive of Fisheries Management Scotland, said: “We are very disappointed that this escape has occurred. The Carradale North farm is a new development, and we are all agreed it is not acceptable for such escapes to occur. It is crucial that lessons are learned, and that appropriate steps are taken to avoid such escapes happening in future.

“We have welcomed Mowi’s commitment to work with us and to fund a comprehensive genetics study that will help us better understand the potential impacts. We will continue to engage with the industry and regulators, with a view to improving the situation for wild salmon and sea trout.”

Ben Hadfield, COO of Mowi Scotland, said: “I would like to thank Fisheries Management Scotland and their member District Salmon Fishery Boards and Fisheries Trusts for their efforts to remove these fish from rivers across the Firth of Clyde, and apologise for any disruption and concern this escape has caused all those with an interest in wild salmon. We have learned the root cause of the escape – system anchor lines crossing and resulting in friction failure – and acknowledge our responsibility to quickly learn from this event to prevent it from occurring again.”

Polly Burns, aquaculture interactions manager at Fisheries Management Scotland, added: “We would like to thank anglers for their continuing efforts to capture and report farmed fish entering our rivers. We have received about 150 reports of farmed fish captures from a range of rivers both within and out with the Firth of Clyde and we continue to urge anglers to report catches of farmed fish, using the reporting system on our website.”