Dec 3, 2020
Environmental groups call for salmon farming to be moved onshore after 130,000 fish escape through tear in net 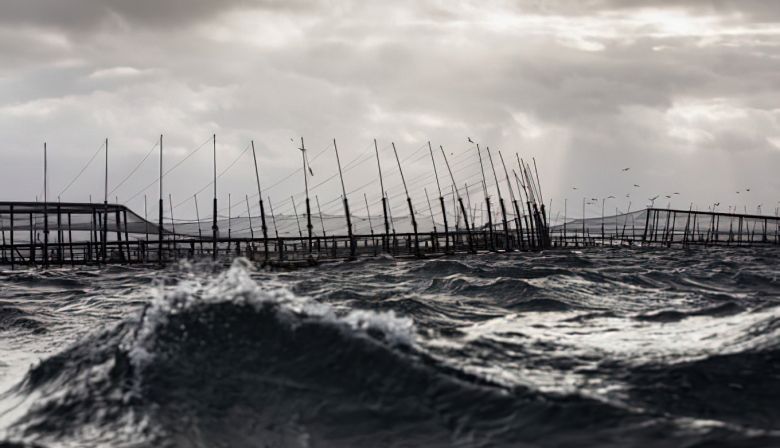 Storms have ripped nets at a net-pen site in Tasmania owned by Huon. About 130,000 Atlantic salmon escaped, angering conservationists. Photo Huon
Huon Aquaculture has been savaged after another mass salmon outbreak in Tasmania that could threaten native marine life, with conservationists labelling escape management practices in the state “a circus”.

About 130,000 farmed Atlantic salmon swam to freedom after a tear was found in the netting of a fish pen in Storm Bay on Wednesday. Huon’s chief executive, Peter Bender, said there was a “significant loss of fish”.

“This incident, coupled with the fire at a pen in the Lower Channel last week, is hugely concerning,” he said in a statement on Thursday. “Crews have continued working through the night to assess and review this incident with no clear cause identified.”

Fears for environment after 50,000 fish escape salmon farm in Tasmania

Bender said due to their small size, it was “unlikely” the fish would survive in the marine environment but conservationists argue evidence suggests young salmon are more likely to feed because they are adaptable and not yet used to pellets.

Peter George, co-chair of the Tasmanian Alliance for Marine Protection, blasted Huon over its second mass outbreak and dismissed the suggestion the fish posed no threat to the local environment.

“It’s a real threat and anyone who thinks otherwise is dreaming,” he said. “It’s simply outrageous that Huon Aquaculture spins the escape of an introduced species into local waters as a great day for fishers.”

Crews have been unable to identify how the net tore but Huon said the main structure of the pen hadn’t been compromised. “The direction of the prevailing winds would indicate that weather is not the cause of the net tear,” the company said.

About 50,000 salmon also swam to freedom last week after an electric fire melted parts of a Huon Aquaculture enclosure in the D’Entrecasteaux Channel.

The company said then that those fish would not cause any damage to the local ecosystem – citing a 2018 Institute for Marine and Antarctic Studies (IMAS) report on escaped farmed fish.

This second outbreak, with close to three times the number of non-native fish released into local waters, has further angered conservationists.

“Salmon escape management in Tasmania has turned into a circus,” said Laura Kelly from Environment Tasmania. “Each time this happens, the companies run spin about how much fun their escapes will be to catch … and the Tasmanian government simply regurgitates industry spin.”

Kelly said adding major escape incidents to trickle losses of 3% a year meant there were “one million introduced species being dumped in our [Tasmanian] seas every year”.

Environment Tasmania cited an IMAS report that found at least 15% – or 150,000 salmon – would survive off native marine life.

“Last week’s escapes are already being caught with crabs, shrimp and small fish in their guts,” Kelly said. She told the Guardian that outbreaks were a fairly regular occurrence.

Bender said the latest incident was reported to the state government “in accordance with our regulatory requirements”. The Guardian has contacted the relevant department for comment.

George said the issue was being ignored by politicians, regulators and the industry, who were all adopting a “nothing-to-be-seen-here attitude”.

“But this escape is just one more reason why the industry needs to get out of our waters and move ashore as is happening everywhere else in the world,” he said.