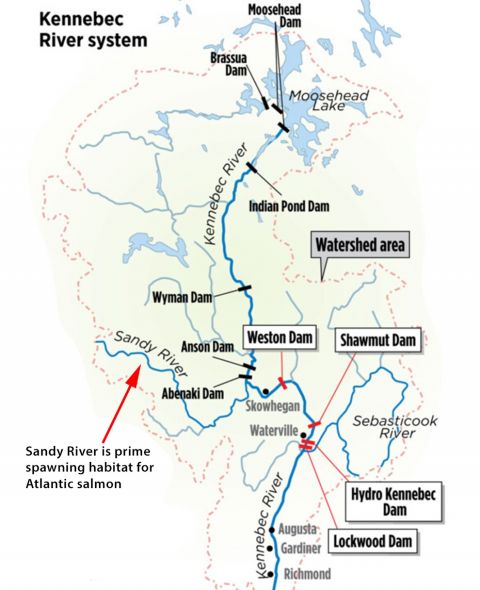 Four conservation groups have filed notices of their intent to sue a $600 billion Canadian conglomerate over alleged violations of the Endangered Species Act at four dams it owns on the lower sections of the Kennebec River.

The Atlantic Salmon Federation, Conservation Law Foundation, Maine Rivers and Natural Resources Council of Maine have filed notices of their intent to sue to officials and attorneys for the renewable power subsidiary of Brookfield Asset Management, an Ontario-based global asset manager with $60 billion in annual revenue and $600 billion in assets, including 5,300 hydropower dams worldwide, 38 of which are in Maine. The Endangered Species Act requires potential litigants file such a notice at least 60 days in advance of filing a suit.

The conservation groups allege that Brookfield Renewable has been killing Atlantic salmon at its dams on the Kennebec in violation of the law since Dec. 31, 2019, when its federal authorizations to kill salmon expired.

“Right now they are operating those facilities in violation of the Endangered Species Act, because they don’t have authorization to kill Atlantic salmon, which is what their dams do,” said Sean Mahoney, executive vice president of the Conservation Law Foundation. “So they need to apply to get that authority or they need to remove the cause of the killing or taking of Atlantic salmon, which are the four dams.”

A Brookfield spokesman said the company has been taking actions to avoid killing migrating salmon in consultation with regulatory bodies, including a monthlong shutdown of the four dams’ turbines that ended June 3. “Since it was those same agencies who have advised us on the restart, we assume we are not in violation” of the Endangered Species Act, Brookfield Renewable spokesman Andy Davis said via email.

The conservation groups’ move represents an intensification of the battle over the future of fish runs in western Maine’s largest river system and the survival of endangered Atlantic salmon in the United States.

Maine has been a nationwide leader in the restoration of river systems and the sea-run fish that spawn in them. With the removal of Augusta’s Edwards Dam on the lower Kennebec in 1999 and the Great Works and Veazie dams in the lower Penobscot in 2012 and 2013, alewives, shad, blueback herring and salmon had access to thousands of miles of river habitat for the first time since the early 19th century. The alewife run into the Sebasticook, a tributary of the Kennebec made accessible by dam removals, is now the largest in the United States, with nearly 6 million fish, and a favorite bald eagle dining site.

For years, conservation groups and the state of Maine have sought to ensure salmon and shad can access the Sandy River, a tributary of the Kennebec with extensive prime habitat for the fish. The four Brookfield dams stand in their way: Hydro Kennebec and Lockwood in Waterville, the Weston dam near Skowhegan, and the Shawmut project, which spans the Kennebec between Fairfield and Benton and is currently under review for a 50-year renewal of its federal operating license.

“The big picture is that in the long run we need to have the Kennebec work for Atlantic salmon. You need to get them up the Sandy River with its high-quality habitat, because that’s basically what will prevent the species from going extinct in the United States,” said John Burrows, executive director for U.S. programs at the Atlantic Salmon Federation, which is headquartered in Chamcook, New Brunswick. “We’re not aware of any self-sustaining salmon population that has to go by more than one dam, and if we want to have the best shot at recovery you need to get rid of all four of these dams.”

The Brookfield dams are medium size by Maine standards. Shawmut is a 19-foot-tall concrete dam with two powerhouses and extends 1,500 feet across the Kennebec. Lockwood, at the Ticonic Falls in central Waterville, is 17 feet high and 875 feet long, and was built in 1919 to generate power for the Lockwood textile mill. Together they generate 46.9 megawatts of power, enough to supply 37,000 homes and representing about 3 percent of the state’s renewable electricity.

Negotiations over the dams have dragged on for years and encompass separate overlapping federal processes regarding the protection of endangered species (the salmon) and water quality standards (over which states have a lot of influence). They’ve been acrimonious at times. An independent engineering study submitted to Federal Energy Regulatory Commission by Brookfield was found in November 2019 to have been pruned of sections that undermined the company’s position that the dams can be retrofitted rather than removed.

Brookfield has repeatedly said it is developing engineered solutions to improve fish passage at the dams, but its latest interim plan to protect fish, filed May 31 with FERC, proposes no upgrades or significant changes, apart from lowering some dam components that hamper the fish during the month of May each year. FERC rejected the company’s previous species protection proposal for the four dams in July 2020.

“Biologists have been hard at work keeping Atlantic salmon in the Kennebec for years, years that Brookfield has spent delaying and stalling and not meeting the requirements for functional fish passage,” said Landis Hudson, executive director of Maine Rivers. “They seem to have resources for lawyers, and I cannot fathom why they can’t look at the situation, the reality of engineered solutions here, and read the writing on the wall.”

“Do they want to be seen as the entity that let the Atlantic salmon disappear from an important river in an important state?” she added.

Brookfield’s Davis said the specifics of future fish passage measures at Shawmut would be revealed in the future, when FERC issues a new license for the dam, whose current license expires at the end of January 2022. He said opponents had confounded the company’s efforts to construct and improve fish passages on the lower Kennebec through their opposition to design plans.

“Over the last 20 years, many of these groups have acted with little consideration of the economic or community impacts that would come with their desired outcome,” he said via email.

He said the company supported “the laudable goals of the state of Maine to reduce carbon emissions” and believed Shawmut, Lockwood and the other dams “will remain critical to a balanced path to achievement of these goals.”

However, NRCM, which champions climate change action, backs decommissioning of at least some of the dams and is one of the groups intending to sue Brookfield.

Mahoney said the suit will be filed in federal court, almost certainly in Maine, sometime after the 60-day notice period ends in late July. “You have a fall downriver migration in October and into early November where the juvenile salmon run into problems with the dams,” he added. “It means there’s an urgency to this for sure.”

In a separate development this week, Brookfield was dealt a major setback involving its dams on the Union River in eastern Maine. The Board of Environmental Protection voted to uphold the Maine Department of Environmental Protection’s March 2020 decision to deny water quality certification for the Ellsworth Hydroelectric Project, which consists of two dams: the Ellsworth Dam and the Graham Lake Dam. The project’s FERC license expired in 2018 and it is operating under a recurring annual license, but without the certification from the state, Brookfield cannot get it renewed.

The state says Brookfield isn’t maintaining an environment in Graham Lake and Leonard Lake that is suitable for aquatic life. In a statement, Brookfield Renewable said it would seek legal and regulatory options to obtain water quality certification from the state for the Ellsworth area dams and “ensure continued generation of renewable energy for the long-term.”