Jun 25, 2019
Lawmakers had ordered fishways shut to the keystone food fish in 1995, causing their population to collapse. 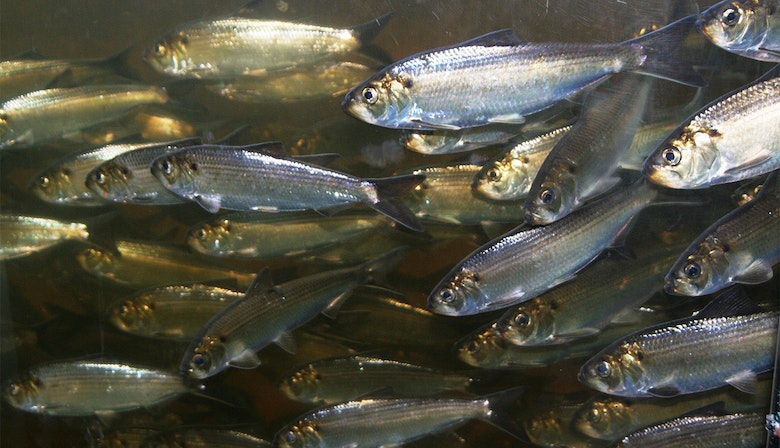 Alewives are an important part of the food web of rivers in Maine. John Burrows/ASF
Alewives – the herring-like fish that provide a key source of food for fish, birds and people – have had a banner spawning run in the St. Croix River, from which they had been banned for nearly two decades.

As of Thursday, 480,670 alewives and related river herring species had entered the river via a fishway at the dam in Milltown, New Brunswick, across from Calais, said Rebecca Goreham, the field biologist overseeing the count for the St. Croix International Waterway Commission.

By the time it wraps up next month, the run will likely nearly double last year’s – 270,659 – and more than triple 2017’s total of 157,750. It’s an enormous turnaround from the mere 900 fish that made the run in 2002, when Maine lawmakers ordered fish passages closed to the alewives at the behest of bass fishing guides.

“This is a clear demonstration that if you give nature a chance it knows what to do,” said Pete Didisheim, senior advocacy director at the Natural Resources Council of Maine. “It’s quite exciting, because alewives are kind of the Purina fish chow of the ocean.”

The return of alewives to the St. Croix river system – which straddles the Maine-New Brunswick border – has been celebrated by the U.S. and Canadian governments, the Passamaquoddy Indian tribe, conservationists and marine fishermen, all of whom point to broad agreement among scientists that the fish will benefit the ecosystem.

“When we do things to one species it can affect another species and the whole environment in ways we wouldn’t have predicted,” says Edward Bassett of the Passamaquoddy Tribe at Pleasant Point’s environment department. “If we even attain half the river herring carrying capacity in this watershed, it would be bringing back millions and millions of pounds of protein and lipids and nourishment for all kinds of species that feed on alewives, maybe bringing back other species like groundfish.”

Alewives were effectively shut out of the St. Croix River from 1825 to 1981, first because of impassable dams, and later because of pollution from lumber and paper mills. Meanwhile, smallmouth bass were introduced to the region by late-19th century sport fishermen, supporting fishing camps and guides across the watershed. 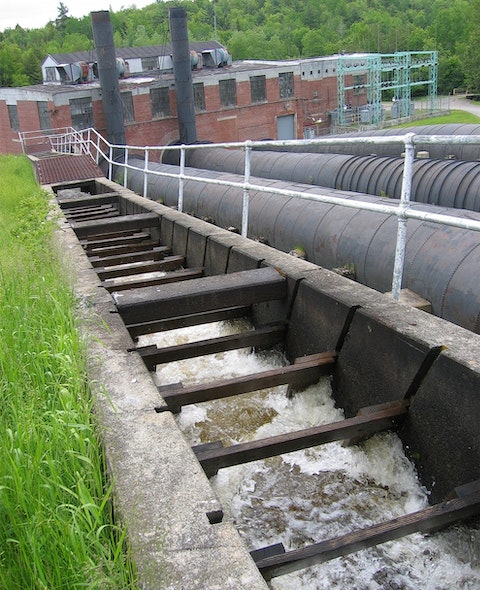 This fishway at Grand Falls on the St. Croix River was sealed to the migration of the native alewives. The opening of this and other fishways has brought back an important species from the edge of extirpation. Tom Moffatt/ASF
But with construction of a better fishway at the dam at the mouth of the river in the early 1980s, the alewives’ annual run grew 13-fold to more than 2.6 million fish. Bass guides worried about the possible effects on smallmouth bass and persuaded Augusta lawmakers to pass a 1995 law that ordered the fishways at the Grand Falls and the Woodland dams – which are controlled from the Maine side of the river – to be closed to the fish. Without access to 94 percent of their previous spawning habitat, the St. Croix alewife runs collapsed to just 900 fish in 2002, a decline of 99.7 percent.

In 2013, lawmakers effectively rescinded the 1995 law, allowing alewives to pass freely through much of the St. Croix watershed, which scientists estimate could support a spawning run of at least 10 million fish. The legislators had been persuaded by an overwhelming scientific consensus that the alewives were not a threat to smallmouth bass and were vital to the vitality of the ecosystem.

Didisheim notes that the removal of dams and other impediments to fish passage over the past 20 years has triggered the comeback of alewives and other fish in the Kennebec and Penobscot river systems. He said he was walking on the Sebasticook River north of Benton last week and saw dozens of bald eagles – including eight in one tree – feeding on the alewives. A few days later in Hallowell he saw people crowding along the bank of the Kennebec to see sturgeon splashing in the river.

“Nobody in the 1960s wanted to get anywhere near the banks of the Kennebec, where there were huge fish kills because the sewage in the river was depleting all the oxygen,” he says. “Fast-forward and there’s a free flowing river through the state capital with leaping sturgeon. That’s pretty cool.”

NRCM is marking the 20th anniversary of the first major dam removal – the Edwards Dam at Augusta on the lower Kennebec – on July 1.