Aug 21, 2019
A standing-room only crowd of over 150 people crammed into the Sherbrooke Lions Hall for a meeting organized by the St. Mary’s River Association and concerned members of the community 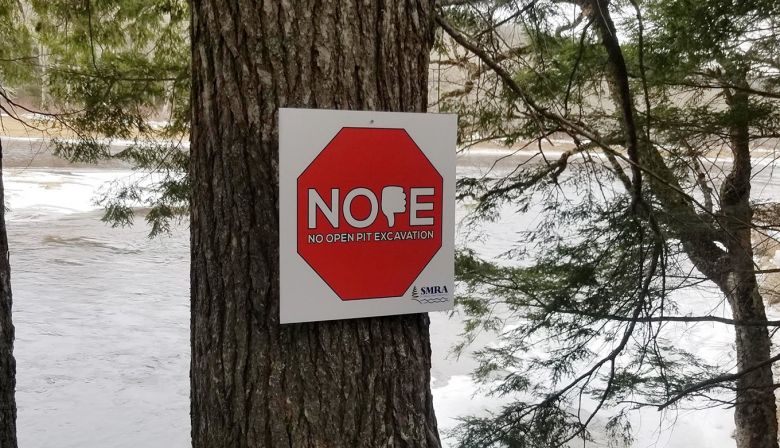 A sign along the St. Mary's River placed by the SMRA. Many residents and members of the St. Mary's River Association are very strongly opposed to the open pit mine project.
SHERBROOKE – A standing-room only crowd of over 150 people crammed into the Sherbrooke Lions Hall for a meeting organized by the St. Mary’s River Association and concerned members of the community. The meeting was organized to discuss plans for the Cochrane Hill gold mine proposed by St Barbara, the Australian company that recently acquired Atlantic Gold. A number of speakers detailed their concerns about placing the mine near the environmentally sensitive St. Mary’s River and its surrounding watershed.

While there were few answers about how the mine might impact the landscape and fish habitat in the St. Mary’s River watershed, there were plenty of questions raised as to how to best mitigate the potential risks that open pit gold mining and a huge tailings pond would present to the river.

Dr. Kevin Spencer, a Halifax emergency room physician and long-time summer resident in the area, raised a number of concerns about the history of gold mining in the province and the environmental record of St Barbara.

“All sides want the same thing, the economic benefits and a tolerable outcome of mining operations,” said Spencer. “No one wants the social tension, ravaged environment and negative impact. The question is whether St Barbara has the environmental resume and track record to carry out a successful project.” Spencer referenced a number of news stories in which St Barbara and other gold mining operators have left negative environmental and human impacts lasting for decades.

Local resident Rene Beaver agreed, noting that “it takes 30 to 40 years for the long-term effects of arsenic to make its way into the watershed and into the human population. Is this company going to be around to look after us if this happens?”

Other speakers outlined the environmental and social impact of Atlantic Gold’s current mine operating at the Touquoy site, near Mosquodobiot. A main concern there is the particulate being stirred up by mining activity that is reported to be affecting a number of residents’ breathing, said Harry Kelly, a Mosquodoboit resident with a summer property in the Sherbrooke area. Another issue is the damage that the high volume of truck traffic is having on the safety of the roads in the area, he said, expressing frustration with what he sees as a lack of concern among local political leaders.

“Our government has betrayed us,” said Kelly. “Clean rivers, lakes and harbours are worth more than gold. None of this activity is contributing to leaving a good planet for our children to live in.”

Dr. Kris Hunter, program director for the Atlantic Salmon Federation, described the importance of protecting the wild Atlantic salmon that are on the endangered list in the coastal uplands region of Nova Scotia. “The St. Mary’s River Association is a model to the region and to the world of how to do Atlantic salmon habitat restoration. They have worked with government and the community for over 40 years. It seems illogical to me that government would fund these restoration projects, then turn around and grant a permit for mining, posing significant risk in an area so well respected for the leadership they are showing in wild Atlantic salmon and river restoration.”

A number of community and environmental groups were represented at the meeting hosted by the St. Mary’s River Association including the Atlantic Salmon Federation, the Nova Scotia Nature Trust and Save Caribou, a community group lobbying for better mine mitigation near the Touquoy mine. Along with local residents and a number of visitors from outside the community, some government representatives were on hand to hear the presentation. Kyle Findlay, parliamentary assistant to Central Nova MP Sean Fraser, stated that an Environmental Impact Study is still not complete and has been delayed by requests for more information and the change of ownership in the mining company. “We of course support jobs in the area, but not at the expense of the environment.”

St. Mary’s Council CAO Marvin MacDonald noted that the economic impact study the council has contracted has been delayed as well and won’t be ready until sometime later this fall.

Mosquodoboit native and Provincial NDP Leader Gary Burrill was on hand, noting that he had first-hand experience when still a United Church Minister and then MLA in the area, with how mining has impacted the wildlife, fish and waterways of his community. He encouraged attendees to direct their concerns to Premier MacNeil and continue to push for more and better answers. Burrill said, “In some ways Sherbrooke has more to lose than Mosquodoboit did. There, it was a case of a dying community receiving a boost. The future of Sherbrooke is vibrant and the St. Mary’s River is central to its health and vitality going forward.”

St Barbara has held one Community Liason Committee meeting so far but none are scheduled in the near future.