State urged to include Atlantic salmon on endangered species list 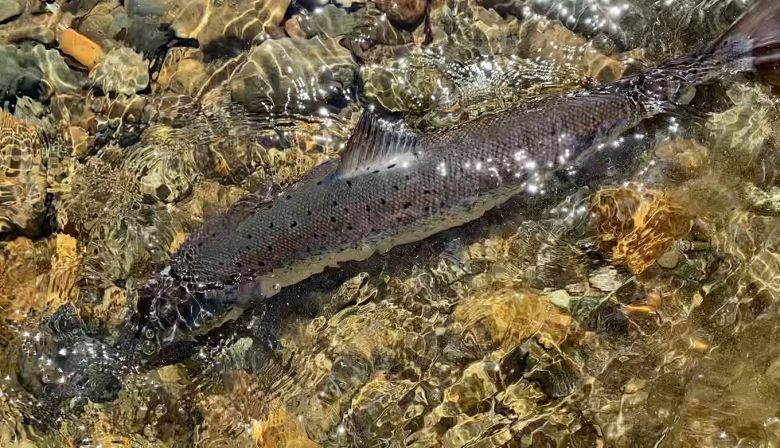 Wild Atlantic salmon being released into Sandy River, after trucking from Lockwood Dam on the Kennebec. Photo Cassidy Bigos
Ten conservation groups and six individuals with years of experience in fisheries issues have sent a letter to the commissioner of the Maine Department of Inland Fisheries and Wildlife, requesting the inclusion of Atlantic salmon on the state’s list of endangered species. That would help align the state with the federal government’s conservation efforts, according to the letter.

Adding a state listing would help address ongoing threats to Atlantic salmon that the federal listing hasn’t dealt with, said John Burrows, the executive director of U.S. Programs for the Atlantic Salmon Federation.

And those zones are critical for all kinds of fish and wildlife, he said.

“A state listing can help create state-level protections for this habitat, such as buffer zones, which will also benefit brook trout and a number of other fish, bird, and wildlife species that also need larger areas of protected habitat within our river corridors,” Burrows said.

Conservationists agree that this is a critical next step in restoring Atlantic salmon in Maine.

“As far as Atlantic salmon go, the horse left the stall 20 years ago when the feds listed the species as ‘Endangered,’ and it won’t be put back until we restore them or the feds throw in the towel,” said Bob Mallard, executive director of the Native Fish Coalition. “Due to the fact that the only active restoration efforts are in Maine, the likelihood that the feds will give up anytime soon is low. If you don’t like federal intervention, fix the problem.”

Getting the DIF&W to take a more active role in salmon restoration would make a huge difference, Mallard said.

“Without their full support this is not going to happen. The best way to do that, and the right thing to do at this time, is to list salmon as ‘Endangered’ at the state level,” he said.

Mallard said the groups bonded together for a simple reason: To avoid extinction of Atlantic salmon in Maine.

“The longer we resist getting completely engaged the longer we will be in limbo, or worse, the more likely we will lose the species,” Mallard said.

Recognizing the special value of Maine’s Atlantic salmon is essential for restoration efforts to succeed, he said.

The DIF&W manages those species listed under the state act, and shares management responsibility with the U.S. Fish and Wildlife Service for inland fish and wildlife listed under the federal act.

The commissioner of the DIF&W is allowed to suggest species be added to the list if the species is at risk of extinction.

The department had received the letter and would review the request said Mark Latti, the DIF&W’s communications director.